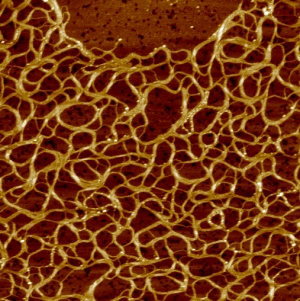 When warmed, a new synthetic polymer forms a network, seen here under an atomic force microscope. The gaps are about one-tenth of a micrometer.

Take one kilogram of polyisocyanide polymer. Sprinkle liberally across an Olympic swimming pool. Warm gently. Within minutes, your jelly is ready. Serves 25 million.

Alan Rowan, a materials chemist at Radboud University Nijmegen in the Netherlands, is describing the properties of a remarkable polymer developed in his lab and unveiled today in Nature1. He has not actually run the swimming-pool experiment, but he sounds as if he would love to give it a try. When it comes to forming gels, he says excitedly, his polymer is “probably the best in the world — an order of magnitude better than anything else”.

But it offers much more than record-breaking dessert portions: it is the first synthetic polymer that can match the rigidity found in many biological polymers, says Margaret Gardel, a biophysicist at the University of Chicago, Illinois, who wrote a News and Views article2 to accompany the publication. “Nearly all biopolymers, like DNA or collagen, have some inherent rigidity,” she explains; synthetic polymers, by contrast, tend to be extremely floppy.

Rowan’s polymer strands have a helical backbone with thousands of short peptides jutting out from the sides, each carrying long tails made of repeating carbon and oxygen chains. Oxygen and hydrogen atoms in neighbouring peptides bond to each other to give the backbone rigidity, and the carbon and oxygen tails readily grab water molecules, making the polymer extremely soluble. 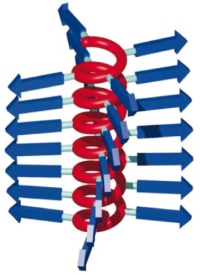 The polymer has a helical backbone (red) and tails (blue) that link to neighbouring strands.

Once the polymer is dissolved, warming it causes the tails to squeeze water molecules away and form links with neighbouring polymer strands. Above a certain temperature, the solution transforms into a gel in seconds as the strands self-assemble into bundles roughly 10 nanometres wide. As with the biopolymers in a living cell, or the fibres in a rope, the bundling stiffens the whole structure. “The nanoscale mechanism is the same as at the macroscale,” says Rowan.

Researchers already knew that bundling was important in strengthening biopolymers. But Rowan’s team has measured the stiffness of individual strands and of the bundles, and has shown the relationship between the two. “Now that we understand the principles, we can start making gels at even lower concentrations,” predicts Rowan.

The polymer’s ability to form a gel on heating is relatively unusual: the opposite is true for most gels. A gelatin solution, for example, must be cooled to form jelly. Rowan imagines that a cold solution of his polymer poured on to a wound to protect the tissue would quickly form a gel barrier when it warmed to body temperature; applying an ice pack could liquefy it when it was no longer needed. The researchers are now running tests on this concept, “using a leg of pork that we put in the oven at 40 °C”, says Rowan.