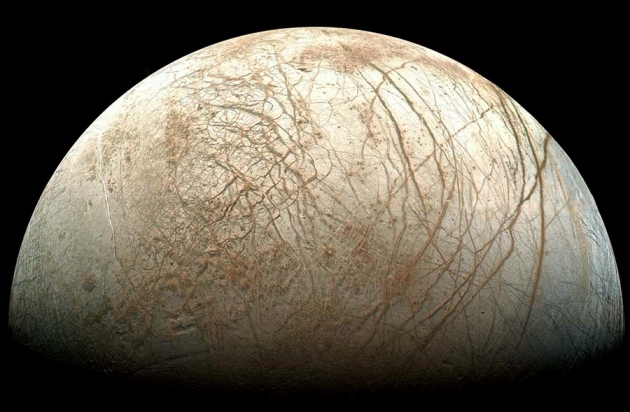 Some of the scars on the Jovian moon Europa could be the result of subducting plates.

If you have got an idea for how to study Europa, then NASA wants to hear from you.

The agency has no official plans for a mission to the Jovian moon, whose icy crust covers a watery ocean in which life could theoretically exist. But spurred by intense congressional interest and several recent discoveries, NASA is seeking ideas for instruments that could fly on a mission to Europa. The possibilities range from a stripped-down probe that would zip past the moon, to a carefully designed Jupiter orbiter that would explore Europa over many years.

The groundswell of enthusiasm is likely to be bolstered by the latest big news, reported on 7 September, that there may be giant plates of ice shuffling around on Europa — much as plates of rock do on Earth (S. A. Kattenhorn and L. M. Prockter Nature Geosci. http://dx.doi.org/10.1038/ngeo2245; 2014). Such active geology suggests that Europa’s icy surface is connected to its buried ocean — creating a possible pathway for salts, minerals and maybe even microbes to get from the ocean to the surface and back again.

Simon Kattenhorn, a geologist previously at the University of Idaho in Moscow, and Louise Prockter, a planetary scientist at the Johns Hopkins Applied Physics Laboratory in Laurel, Maryland, made the finding after combing through pictures from NASA’s Galileo spacecraft, which orbited Jupiter from 1995 to 2003. Most of its pictures of Europa are fairly blurry, but Kattenhorn and Prockter scrutinized one of the few regions of the moon for which high-resolution images exist. 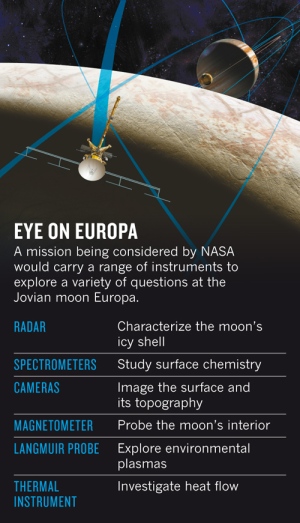 They treated the images as though they were parts of a giant geological jigsaw puzzle, with ridges and bands and other features that have been split and separated by crustal movements, and tried to trace how the surface of Europa had transformed over time. “When we moved all the pieces back together, there was a big hole in the reconstruction, a sort of blank space,” says Kattenhorn. The missing portion, the scientists concluded, must have been somehow sucked down into the moon’s interior.

Kattenhorn and Prockter propose a system of plate tectonics that involves a shell of ice a few kilometres thick sliding around on warmer, more fluid ice. When one plate hits another and begins to dive downwards — or subduct — it melts and becomes incorporated in the underlying ice, the duo proposes.

Places have already been spotted on Europa where fresh ice crust is being born, but the latest research is the first to pinpoint where it might be going to die.

But without high-resolution images from more areas, researchers cannot tell whether subduction might also be happening in other locations. If it turns out to be common, it might mean that the moon could be cycling life-friendly compounds between the surface and the deep, and that substantially increases the chance that its ocean is habitable, says Michael Bland, a planetary scientist at the US Geological Survey in Flagstaff, Arizona.

The discovery adds to excitement set off in December, when scientists reported plumes of water vapour spurting out at Europa’s south pole (L. Roth et al. Science 343, 171–174; 2014). The plumes have not been seen since, and they may or may not be related to Europa’s newly appreciated system of plate tectonics. NASA now needs to figure out what kind of mission might best to explore these discoveries.

For the past several years, engineers at the Jet Propulsion Laboratory in Pasadena, Califor­nia, have been refining a mission concept known as the Europa Clipper. After repeated streamlining, they have come up with a US$2-billion spacecraft design that could carry a range of instruments to the moon (see ‘Eye on Europa’).

But spooked by the cost, NASA has called for ideas that would run at just $1 billion. The agency is now reportedly evaluating a handful of suggestions.

The strategic down-shift has disappointed some scientists. “It’s really frustrating to talk about $1-billion concepts” as if researchers hadn’t already considered that, says Britney Schmidt, a planetary scientist at the Georgia Institute of Technology in Atlanta who worked on the Clipper idea. “If you want to do the best science out there, totally committed to by the community, this is the mission you send.” Because the Clipper would carry a range of instruments, it could investigate subduction zones, explore plumes and respond to a variety of other research questions, says Prockter.

And in July, NASA asked planetary scientists to submit ideas for instruments they would like to see fly onboard a craft such as the Clipper, whatever the cost. Proposals are due by 17 October, and the agency plans to choose around 20 of them next April for further development.

Although NASA is worried about the overall cost of a Europa mission, it has money to spend in the short term. For each of the past couple of years, Congress has given the agency’s planetary-sciences division tens of millions of dollars more than it asked for, and directed it to spend the money on Europa mission concepts. The drive is led by Congressman John Culberson (Republican, Texas), a Star Trek-quoting space enthusiast who sits on a powerful spending committee.

Europa researchers are happy to take advantage. “I’m frothing at the mouth in excitement,” says Kattenhorn. “There is clearly so much more that we still need to learn about Europa.”