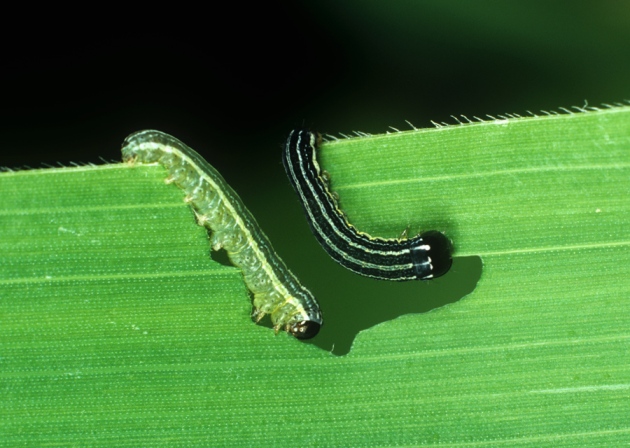 The small mottled willow moth is a pest for many common crops.

It is not unusual for insect pests to feast on each other as well as on their staple veg, but it's now been shown that tomato plants can team up to directly push caterpillars into cannibalism.

“This is a new ecological mechanism of induced resistance that effectively changes the behaviour of the insects,” says Richard Karban, who studies interactions between herbivores and their host plants at the University of California at Davis and was not involved in the study.

Herbivorous pests often turn on each other when their food is of poor quality or it runs out. And some plants are known to affect the behaviour of their pests by making them more predatory towards other species. But until now it was unclear whether plants could directly cause caterpillar cannibalism.

Integrative biologist John Orrock and his colleagues at the University of Wisconsin in Madison triggered a defensive reaction in tomato plants (Solanum lycopersicum) by exposing them to various amounts of methyl jasmonate (MeJA). This is an airborne chemical that plants release to alert each other to danger from pests. When cued with MeJA, tomato plants respond by producing toxins that make them less nutritious to insects.

The researchers then allowed caterpillars of a common pest, the small mottled willow moth (Spodoptera exigua), to attack the crop. Eight days later, they observed that plants more strongly cued with MeJA had lost less biomass compared with control plants or with ones that had received a weaker induction. This showed that the reaction was somehow effective at protecting the plants.

Next, the team wanted to test whether the plants’ response was triggering cannibalistic behaviour in the caterpillars. So they cued tomato plants with MeJA and then fed leaves from cued plants and non-cued control plants to single caterpillars in containers that also contained a set number of dead caterpillars. Two days later, the team observed that caterpillars fed with leaves from the treated plants had turned onto the dead larvae earlier, and had eaten more of them, than those fed with leaves from control plants. The results are published in Nature Ecology & Evolution1.

The caterpillars will always eat each other eventually, but the difference in timing is critical, says Orrock, “if plants can induce pests to eat each other earlier, there will be more of the plant left untouched”. However, he also cautions that the cost to the plant of activating its defences is very high. “It is very possible that the plants will strike a balance and decide if the attack is serious enough to activate the defences.”

Anurag Agrawal, who studies plant–animal interactions at Cornell University in Ithaca, New York, says that the study suggests that farmers could foster cannibalism as a pest-management strategy. “Nonetheless, under some field conditions, cannibals may be more fit than non-cannibals. So this is something to watch out for,” he added, “We don’t want to be encouraging super-pests”.