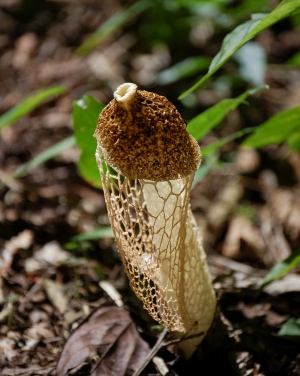 Fungi such as the netted stinkhorn (genus Dictyophora) get more efficient at killing a plant that becomes more prevalent, and so they help to keep populations in check.

Voracious pests may be foes of individual plants, but they can benefit forests. A study in the humid rainforests of Belize shows that plant-killing fungi can help preserve diversity in such ecosystems.

The study, published today by Nature1, provides experimental support for a leading ecological hypothesis on why any given plant species does not take over in species-rich forests. That proposal — the ‘Janzen–Connell hypothesis’ — posits that as the population of a plant species grows, so does the rate at which specialized pests dine on it. Those pests then keep dominant plants in check, giving other species room to flourish.

“The more common a plant is, the more aggressively it is attacked,” says Keith Clay, a plant ecologist at Indiana University in Bloomington, who was not involved with the study. “It’s a mechanism for maintaining diversity.”

Since the Janzen–Connell hypothesis was proposed more than 40 years ago, many research teams have gathered evidence that plant-munching insects and other predators keep populations of plant species in check. But few were able to establish that this mechanism also boosted plant diversity, says Clay.

Owen Lewis, an ecologist at the University of Oxford, UK, and his colleagues decided to test the hypothesis experimentally. The team marked field plots in the Chiquibul Forest Reserve in southwestern Belize, where the ground is laced with thick, shallow roots and seeds fall from a thick canopy overhead. Some of the plots were treated with fungicides, and others with an insecticide. Control plots were sprayed with water. 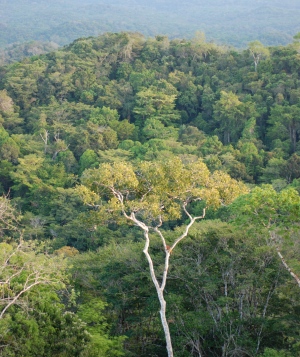 A view of the Belize rainforest.

Lewis and his team plan to expand their work to other locales, and have begun identifying key fungi in the Belize test plots. Lewis notes that the work could be important for understanding how forests might react to climate change because fungi are very sensitive to changes in humidity.

Scott Mangan, an ecologist at Washington University in St. Louis, Missouri, adds that the Belize study could inform forest-restoration efforts by highlighting the importance of fungi in the soil. “Before we go into the region that we want to restore, we want to keep in mind that it’s not just the trees that are in that area,” says Mangan. “We want a well-established natural soil community as well, or you may not get these mechanisms to preserve diversity.”