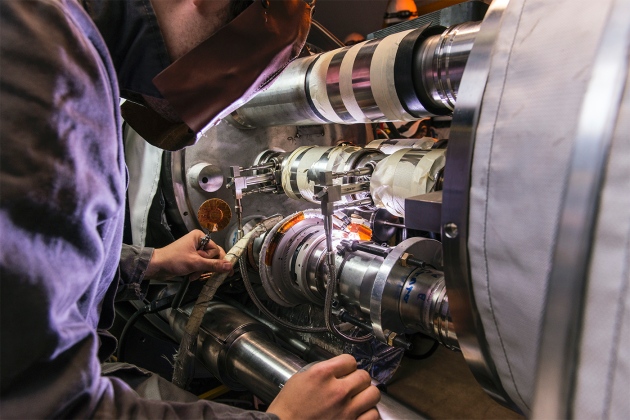 The Large Hadron Collider (pictured) collides protons, whereas the proposed linear accelerator would smash together electrons and positrons.

Limited funding and a dearth of newly discovered particles are forcing physicists to cut back plans for their next major accelerator project: a multibillion-dollar facility known as the International Linear Collider (ILC) in Japan.

On 7 November, the International Committee for Future Accelerators (ICFA), which oversees work on the ILC, endorsed halving the machine’s planned energy from 500 to 250 gigaelectronvolts (GeV), and shortening its proposed 33.5-kilometre-long tunnel by as much as 13 kilometres. The scaled-down version would have to forego some of its planned research such as studies of the ‘top’ flavour of quark, which is produced only at higher energies.

Instead, the collider would focus on studying the particle that endows all others with mass — the Higgs boson, which was detected in 2012 by the Large Hadron Collider (LHC) at CERN, Europe’s particle-physics lab near Geneva, Switzerland.

Leading particle physicists nevertheless remain upbeat. A 250-GeV machine still has “a convincing physics case”, says Hugh Montgomery at the Thomas Jefferson National Accelerator Facility in Newport News, Virginia. He says that it could be upgraded to higher energies in future.

High-energy physicists have been planning a future linear collider for 25 years, but the ILC is now unlikely to see the light of day until at least 2030. They viewed the linear collider as complementary to the LHC, allowing physicists to scrutinize in detail any particles discovered at CERN.

The circular LHC smashes together protons, which allows it to reach very high energies (13 teraelectronvolts). But, as composite particles (made of quarks), protons create messy collisions with clouds of debris.

By contrast, the ILC would collide electrons and positrons head on after accelerating them in thousands of superconducting cavities joined end to end. Although yielding lower energies, its collisions — between fundamental particles — would be cleaner and more precise than those in a proton–proton machine.

The international physics community had hoped that Japan would foot much of the estimated US$10 billion needed to realize the original design, after researchers there put forward a proposal to host the facility in October 2012, just after the Higgs discovery. But the Japanese government — deterred by the project’s huge price tag, according to Tatsuya Nakada, a physicist at the Swiss Federal Institute of Technology (EPFL) in Lausanne, Switzerland — has not yet made any offer of funding.

That fact, coupled with an absence of any other new particle discoveries at the LHC beyond the Higgs, led the Japan Association of High Energy Physicists in July to propose capping the ILC’s energy at 250 GeV.

Aiming for a higher energy, the association explained, made less sense after data collected by the LHC in 2015 and 2016 showed that any particles outside physicists’ standard model are unlikely to weigh less than 1,000 GeV, and therefore would be out of reach even for a full-scale version of the ILC. However, 250 GeV is high enough to produce large numbers of Higgs bosons, which, the association said, could yield indirect signs of new physics through measurements of their interactions with other known particles.

This proposed ‘Higgs factory’ has also been endorsed by an international working group responsible for formulating the ILC’s science case, in a paper uploaded to the preprint server arXiv last month1. The ICFA then gave the pared-down collider its thumbs up at a meeting held in Ottawa, Canada, this week.

Not all physicists are enthusiastic, however. John Ellis, a theorist at King’s College London and CERN, maintains that only when operating at around 1,000 GeV will a linear collider provide “a more complete picture of the Higgs”. He acknowledges that costs need to be reined in, but says that in limiting the ILC to 250 GeV, “you are making significant scientific compromises”.

A report uploaded to arXiv last week2 describes three possible layouts for the 250 GeV model (a technical design for the higher-energy ILC was published in 2013). Each requires halving the length of the superconducting electron–positron accelerators, but two of the options retain extra tunnel space to accommodate future upgrades.

Taking into account projected savings from ongoing research into accelerators, the report estimates that the collider’s core construction cost could be reduced by as much as 40% — bringing it down to around $5 billion in 2012 prices. Manpower and detectors would then raise the total to about $7 billion, according to Lyn Evans, an accelerator physicist at CERN who is directing research on the ILC.

Michael Peskin, a theoretical partical physicist at the SLAC National Accelerator Laboratory in Menlo Park, California, and a member of the ILC working group, has no doubt about the value of a Higgs factory. He says that theoretical studies of the Higgs boson and the weak nuclear force — one of the four known fundamental forces — done over the past year have strengthened the case for experimental probes of the Higgs’ interaction strength (the Higgs is required to give the carriers of the weak force finite mass). “The 250-GeV stage is actually more interesting scientifically than we thought,” he says.

The ILC decision now rests with Japan. Evans describes the Japanese government’s ongoing assessment of the linear-collider project as “very long and very frustrating”. But other countries won’t commit money until the host country makes its plans known, he says. “The rest of the world is waiting for the Japanese government to decide,” he says.