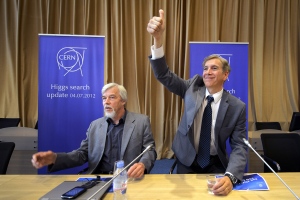 Physicists announced today that they have seen a clear signal of a Higgs boson — a key part of the mechanism that gives all particles their masses.

Two independent experiments reported their results this morning at CERN, Europe's high-energy physics laboratory near Geneva in Switzerland. Both show convincing evidence of a new boson particle weighing around 125 gigaelectronvolts, which so far fits predictions of the Higgs previously made by theoretical physicists.

"As a layman I would say: 'I think we have it'. Would you agree?" Rolf-Dieter Heuer, CERN's director-general, asked the packed auditorium. The physicists assembled there burst into applause.

"It's really an incredible thing that it's happened in my lifetime," said Peter Higgs, the theorist after whom the boson is named, struggling not to cry in front of the crowd.

The announcement comes nearly 50 years after Higgs and four other theorists predicted the existence of the boson. The particle was originally invoked to explain why particles called W and Z bosons have mass, whereas photons — particles of light — do not. W and Z bosons mediate the weak nuclear force (which governs certain types of radioactive decay), and photons mediate the electromagnetic force. So by explaining the difference in their masses, the Higgs boson allowed physicists to unite the two forces into a single 'electroweak' force.

Particle physicist Bill Murray gets into the deep details of the Higgs discovery.

As such, the standard model of particle physics is based on the existence of something like a Higgs particle. Over the years, measurements of other particles have verified the model to astonishing precision, building the case for the existence of the Higgs, says Tom Kibble of Imperial College London, another theorist who first predicted the particle. "The whole thing wouldn't fit together nicely if it wasn't there."

Today's announcement is seen as a strong confirmation of the model and a victory for the two experiments at the Large Hadron Collider (LHC). Out of some 500 trillion collisions, "the signal we're looking at is some tens or dozens of particles", says Joe Incandela, spokesperson for the Compact Muon Solenoid (CMS) experiment. The feat is equivalent to picking a few grains out of an Olympic-sized swimming pool full of sand. "I'm just so proud of my collaboration for what they've done," he adds.

Heuer puts the possibility of the measurements being statistical flukes at the order of one in a million— in physicists' terms, around 5 sigma. 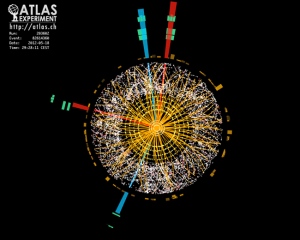 The ATLAS experiment has seen a new type of boson decaying into four electrons - a good indicator that it is a Higgs particle.

The ways in which the new particle interacts with other particles is consistent with what was expected for a Higgs boson, although further measurements will need to be made to pin down its identity. In particular, physicists will want to determine whether the new boson has zero spin as predicted, according to Incandela.

The way in which the new particle decays into other particles will also be key to verifying its precise nature. Already, the new boson seems to be decaying slightly more often into pairs of gamma rays than was predicted by theories, says Bill Murray, a physicist on ATLAS, the other experiment involved in making the discovery. But, he is quick to add, the data are still very preliminary.

To try to answer some of these questions in the next year, the LHC will run for three months longer than was originally planned, according to Heuer. "It's the beginning of a long journey," he says.