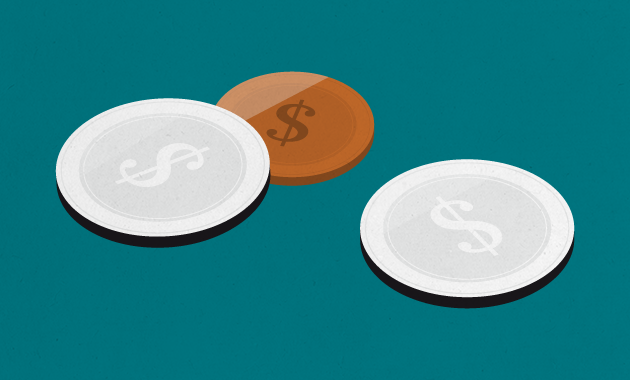 Some postdoctoral researchers at public universities in the United States apparently work for fast-food wages whereas others make more than US$100,000 a year, an analysis of postdoc pay has revealed.

The salary data, which a science-advocacy group released on 1 November after a year-long investigation, are incomplete and — in some cases — appear to be incorrect. Some researchers are listed as earning nothing, and another study underway suggests a higher overall rate of pay for US postdocs. But the latest analysis underscores the challenges of getting basic information about an under-recognized and misunderstood segment of the academic workforce.

Gary McDowell, a former developmental biologist and executive director of Future of Research, an advocacy group in Boston, Massachusetts, used the US Freedom of Information Act to gather salary reports for nearly 13,000 postdocs at 51 public universities. Through personal connections, he also received salary information from one private institution, Boston University in Massachusetts.

Most universities made a good-faith effort to provide salary information, McDowell says, but few had the numbers at hand when he contacted them. McDowell says that he had to spend considerable time on the phone explaining to university employees what 'postdoc' means. “I asked a basic question — 'How much do your postdocs get paid?' — but there was a lot of confusion,” he says. “It points to how much interest there is in postdocs at these institutions.”

Some universities still provided improbable numbers. They include the University of Utah in Salt Lake City, which reported that 50 postdocs each made $0 per year. McDowell says it is unlikely that these researchers were unpaid volunteers. Instead, he suspects that some institutions — including the University of Utah — reported only the money that postdocs received from the institution's payroll, and overlooked fellowships and other external sources of income. “University of Utah postdoctoral scholars are being paid for their work,” a university spokesman said.

While compiling data, McDowell opted to disregard the 411 reported salaries that were less than $23,660 a year. That is the threshold below which many postdocs would be eligible for overtime pay under a federal law called the Fair Labor Standards Act. “I gave them the benefit of the doubt,” McDowell says of those entries. “Those are likely reporting errors.” 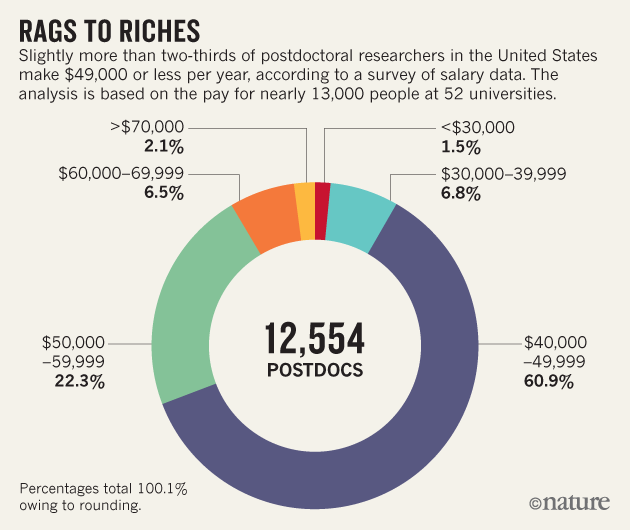 The remaining 12,554 salary reports ranged from $23,660 to $114,600 a year (see 'Rags to riches'). McDowell suspects that some institutions mistakenly included pay data for staff scientists or other employees in their reports, which could explain some of the highest salaries. Even with that caveat, his survey suggests that postdoc salaries range widely. At any given institution, McDowell says, “It’s not uncommon for there to be fourfold differences between the highest and the lowest paid.”

Overall, 61% of reported salaries were between $40,000 and $49,999, and about 31% were reported at $50,000 or more. (The $50,000 figure is the minimum postdoctoral salary recommended in 2014 by the US National Academies of Sciences, Engineering, and Medicine.) The University of Illinois at Urbana-Champaign reported the lowest median salary at $27,515. The University of Maryland at College Park reported the highest median figure — $56,000.

McDowell notes that the data set is still incomplete. Some institutions reported salaries for only a small fraction of their workforce, and the University of California (UC) system denied his request outright. The university system’s public-records office told Nature in a statement that it lacks the capacity to do “the programming required to create the custom data report that Mr McDowell requested”. The University of California, Santa Barbara, had already provided numbers to McDowell when the broader UC system denied his request for data.

Other attempts to gather information on postdoctoral salaries have met with less resistance. The National Postdoctoral Association (NPA) in Rockville, Maryland, solicited salary information from its more than 200 member institutions for a forthcoming report. “We’ve worked with these institutions for over a decade, and when we ask for information they readily give it,” says Kate Sleeth, chairwoman of the NPA’s board of directors. “We didn’t have to explain to anyone what a postdoc is.”

Of the 127 NPA member institutions that participated in the survey, 85% reported paying all postdocs at least $47,484 — the minimum salary established by the US National Institutes of Health for the 2017 fiscal year. The NPA is set to publish the full results of its poll in January 2018.

In the meantime, McDowell is still combing through his data set. Throughout November, he plans to publish daily analyses on the Future of Research website, futureofresearch.org, that will examine salaries at individual institutions and university systems. In doing so, he hopes to promote conversation about the treatment of early-career researchers.