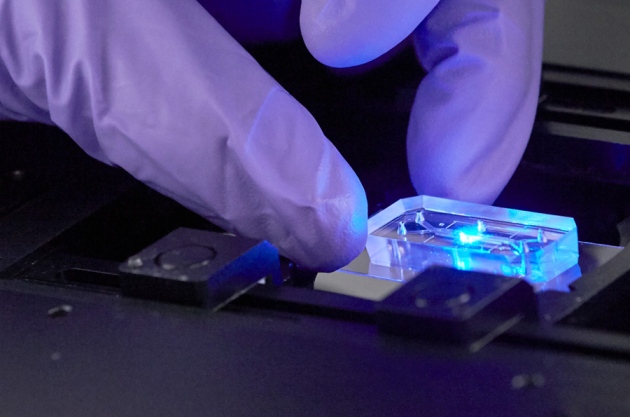 Researchers who are developing miniature models of human organs on plastic chips have touted the nascent technology as a way to replace animal models. Although that goal is still far off, it is starting to come into focus as large pharmaceutical companies begin using these in vitro systems in drug development.

“We are pretty excited about the interest we get from pharma,” says Paul Vulto, co-founder of the biotechnology company Mimetas in Leiden, the Netherlands. “It’s much quicker than I’d expected.” His company is currently working with a consortium of three large pharmaceutical companies that are testing drugs on Mimetas’s kidney-on-a-chip. At the Organ-on-a-Chip World Congress in Boston, Massachusetts, last week, Mimetas was one among many drug and biotechnology firms and academic researchers showing off the latest advances in miniature model organs that respond to drugs and diseases in the same way that human organs such as heart and liver do.

“We’re surprised at how rapidly the technology has come along,” says Dashyant Dhanak, global head of discovery sciences at Johnson & Johnson in New Jersey, which announced last month that it would use a thrombosis-on-chip model from Massachusetts biotechnology firm Emulate to test whether experimental and already-approved drugs could cause blood clots.

Proponents of organs-on-chips say that they are more realistic models of the human body than are flat layers of cells grown in Petri dishes, and could also be more useful than animal models for drug discovery and testing. A lung-on-a-chip, for instance, might consist of a layer of cells exposed to a blood-like medium on one side and air on the other, hooked up to a machine that stretches and compresses the tissue to mimic breathing.

But while some companies are developing chips to mimic diseased organs, most are still testing whether existing drugs behave in the chips as they do in healthy human tissues. And chips or not, any new drug must first be tested in healthy humans for safety, says James Hickman, a bioengineer at the University of Central Florida in Orlando. Using an in vitro organ might help to eliminate or shorten this step.

The chips could also help companies to pinpoint the dose of a drug that is both effective and safe, says Matthew Wagoner, a drug-safety scientist at AstraZeneca in Waltham, Massachusetts. If regulators accept such data, the method might eventually allow companies to skip the portion of a clinical trial that tests a wide range of drug doses on patients.

Other researchers are eager to use organs-on-chips to illuminate differences between animal models and humans. Adrian Roth, head of in vitro safety research at Roche in Basel, Switzerland, says that such comparisons were useful when one of Roche’s experimental drugs was found to cause liver tumours in rats. Roche used data from in vitro models of human and rat livers to argue that the mechanism causing the liver tumours was unique to rodents and should not prevent studies in humans.

“We are surprised at how rapidly the technology has come along.”

But some users are concerned that the hype is getting ahead of reality. The danger, Roth says, is that companies will abandon the technology if it fails to live up to inflated expectations, as has happened with the use of genomics for personalized medicine. “As a pharma company, you have to be very pragmatic,” he says, and not expect the chips to replace animals all at once.

There is reason to be hesitant. Many presenters at the Boston meeting validated their model organs by showing that they responded to drugs in the same way that a human organ does. A model heart might be tested to see whether it speeds up after a dose of adrenaline, for instance. But such tests do not capture anything like the full complexity of organ function, and chips may struggle to recreate aspects of functioning that are governed by complex signals from, say, the endocrine and immune systems.

Even testing a known drug in a system that hitches multiple organ chips together might be difficult to validate, Roth adds, because researchers might not know what to look for. The potentially toxic effect of the painkiller paracetamol on the liver, for instance, is well characterized, but less is known about how other organs respond to the drug.

Nevertheless, many pharmaceutical companies say that organs-on-chips are now sufficiently advanced to justify investment in their use and refinement. “We think it’s important to be involved,” says Michelle Browner, senior director of platform innovation at Johnson & Johnson. Only that way can the technology be developed in line with what the company needs, she says.

And government regulators are also interested. This autumn, the US National Center on Advancing Translational Sciences (NCATS) in Bethesda, Maryland, will bring together academic scientists, pharmaceutical companies and regulators to discuss the chips’ use. NCATS is also funding 11 research teams, each of which is developing a different organ or system that will eventually be linked together to build an entire ‘body-on-a-chip’.