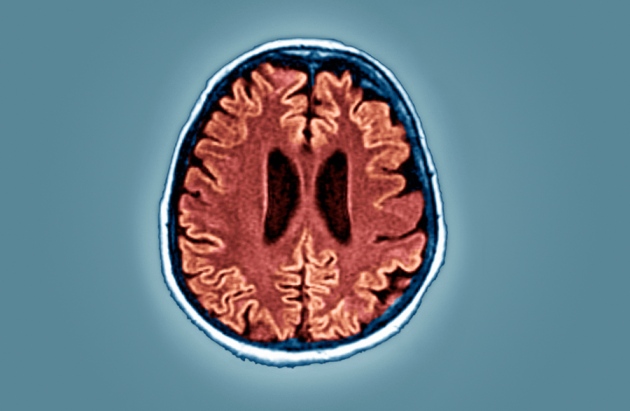 The brain is destroyed by the prion protein that causes variant Creutzfeldt–Jakob disease.

A study1 in the British Medical Journal reveals that 1 in 2,000 people in the United Kingdom might harbour the infectious prion protein that causes variant Creutzfeldt–Jakob disease (vCJD). Nature explains what this means.

The usually fatal condition vCJD is the human form of bovine spongiform encephalopathy (BSE) — dubbed mad-cow disease in the United Kingdom after an outbreak in the 1980s. Both diseases are caused by misfolded proteins called prions, which induce other proteins in the brain to clump together, eventually destroying neurons. Humans are thought to contract the disease by consuming beef that contains infected bovine brain or other infected central-nervous-system tissue. It can also spread through blood transfusions, and some worry that prion diseases can be transmitted through contaminated surgical instruments.

How common is vCJD?

The BSE outbreak in the 1980s and 1990s led to a surge in British vCJD cases. A total of 177 cases have been detected in the United Kingdom so far, with just one in the past two years. Cases of vCJD peaked in 2000, leading some scientists to speculate that the disease has an incubation period of about a decade. Yet studies of different forms of CJD suggest that the incubation time of vCJD could be much longer, indicating that many people in Britain could be carrying the infection without symptoms.

Studies have come to varying conclusions as to just how many people harbour the abnormal prion protein (PrP) that causes vCJD. Surveys of tens of thousands of appendices and tonsils, discarded after surgery, have shown PrP prevalence rates ranging from 1 in 4,0002 to 1 in 10,0003, or even zero4.

What has the latest study found?

Because of the uncertainty over how many people carry the vCJD-causing prion, a body that advises the UK government on the disease called for a comprehensive prevalence survey in 2008. The study was led by Sebastian Bradner, a neuropathologist at University College London, and it tested for PrP in 32,441 appendices from anonymized donors, collected from 41 UK hospitals. The researchers found 16 positive cases, translating to a prevalence rate of about 1 in 2,0001.

Is that number shockingly high?

Not especially, according to Roland Salmon, a retired consultant epidemiologist who wrote an editorial5 in the British Medical Journal to accompany Bradner's paper1. The number reported by Bradner’s team is of the same order of magnitude as the prevalence rate found in a previous survey2 that found 3 positives in 12,674 people.

Does this mean that 1 in 2,000 people in United Kingdom will develop vCJD?

This is unlikely. Animal studies have suggested that the lymphoid system, which includes the spleen and tonsils, is more easily infected with PrP than the brain. But the relationship between infection in the lymphoid system and in the brain is not clear. These cases of detected prions could represent silent carriers, who will not go on to develop clinical vCJD.

“We have no idea if none or a proportion of these people will develop clinical disease, that remains to be seen," says Graham Jackson, a researcher in molecular diagnostics at the Medical Research Council Prion Unit at University College London.

"Whatever the reasons for infected individuals entering a long-term asymptomatic state, much depends on whether this could be expected to last indefinitely, or eventually lead to clinical symptoms,” said the UK government's advisory committee on dangerous pathogens, when the raw numbers from the latest study were released in 2012. The committee's predecessor, which commissioned the report, said, "The precautionary assumption is that further clinical cases may appear after much longer incubation periods than those seen so far, though their number could be significantly reduced by intervening deaths from other causes."

Is the United Kingdom's blood supply at risk?

That is still an open question. The United Kingdom has taken extraordinary measures to protect its supply of donated blood from vCJD, such as banning donation from people who received transfusions after 1980. It is not yet clear whether people with lymphoid-system infections can transmit PrP through their blood. Jackson says that the latest study1 underscores the need for better diagnostics to detect prion infection in blood. “Despite the merciful lack of clinical cases, it tells us this problem has not gone away — far from it."