Every October, scientists worldwide excitedly turn into amateur prognosticators as they try to predict the winners of the Nobel prizes. As this year’s Nobel laureates were inundated with congratulations online, the few researchers who correctly guessed the winners also earned themselves a little kudos. For example, Kate Jeffery, a neuroscientist at University College London, correctly foretold on Twitter on 2 October that her colleague John O’Keefe would win the Nobel Prize in Physiology or Medicine for work on the brain’s positional system:

In an interview, Jeffery said that she wasn’t just making a casual prediction, but was actively rooting for her former postdoc adviser.

She also had reason to celebrate the other two winners, May-Britt Moser and Edvard Moser of the Kavli Institute for Systems Neuroscience in Norway. As a PhD student, Jeffery had worked in the same lab as the Mosers when they were postdocs. “It really has been a delight to see a Nobel-prizewinning discovery unfold from start to finish,” she said.

Paul Bracher, a chemist at Saint Louis University in Missouri, took a mathematical approach to his prediction for the Nobel Prize in Chemistry on his ChemBark blog. He estimated the odds for 50 potential prizewinning breakthroughs, using factors including the freshness of a discovery, the likeability of the candidates and previous awards (such the Wolf Prize in Chemistry) that are often a harbinger of the Nobel. This year, he gave the best odds — 7 to 1 — to single-molecule spectroscopy, the imaging of individual molecules.

Bracher turned out to be right about the discovery but correctly predicted only one out of the three winners: William Moerner, a chemist at Stanford University in California. (The others were Eric Betzig of the Howard Hughes Medical Institute’s Janelia Research Campus in Ashburn, Virginia, and Stefan Hell of the Max Planck Institute for Biophysical Chemistry in Göttingen, Germany.) Fine-tuning his forecasting method has become a hobby for Bracher over the years. “It’s an enjoyable bit of frivolity,” he said. “The only difference between the Nobel committee’s opinion and mine is that my opinion doesn’t come with a million-dollar prize and a nice, shiny medal.”

Several people on Twitter noted that the chemistry prize — which went to three scientists trained in physics but who use their technology to study cell and molecular biology — underscored the challenge of giving discipline-based awards in an age of interdisciplinary discoveries. Susan Vickers, who studies chemistry at the University of British Columbia in Vancouver, Canada, tweeted: 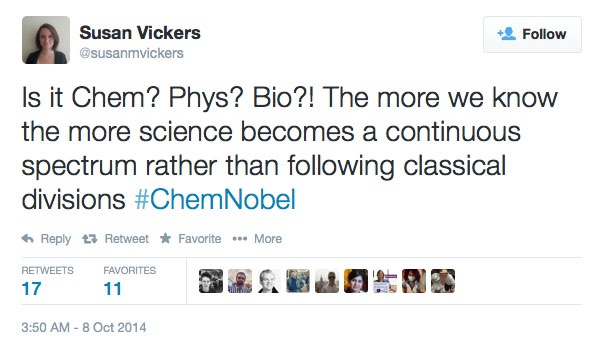 Ben Stein came close to predicting the physics Nobel. The director of Inside Science, a news service funded by the American Institute of Physics, said on his organization’s blog that the light-emitting diode would win, correctly naming one of the winners, Shuji Nakamura of University of California, Santa Barbara (the other two were Isamu Akasaki and Hiroshi Amano at Nagoya University in Japan). Stein wrote on Twitter: 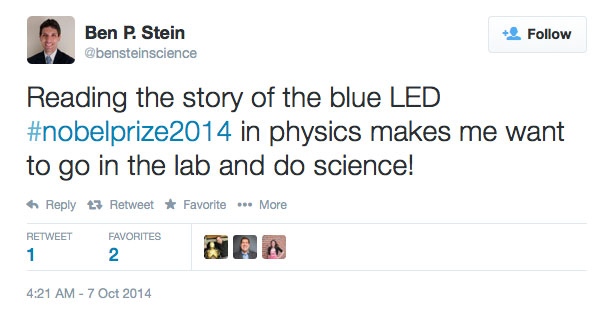 But for every correct prediction, there are many more wrong ones. Sam Lord, a microscopy specialist at the University of California, San Francisco, got all of his picks wrong on his Everyday Scientist blog. Yet for him, the Nobel guessing game is still fun. “Each year, there’s a flurry of blogging and discussion, and I enjoy being part of the mix,” he said.