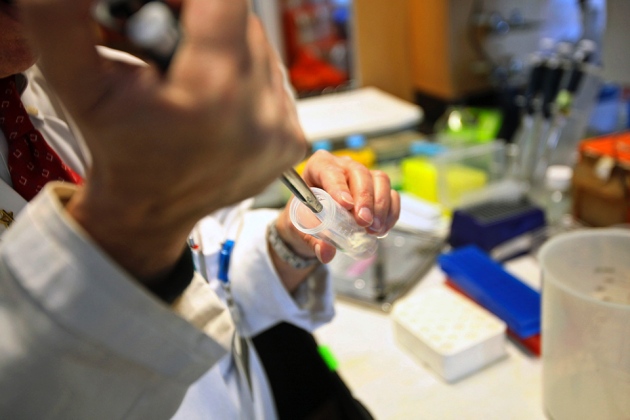 The US National Institutes of Health is the world's largest biomedical research agency.

US President Donald Trump wants to gut government funding for biomedical research, but an analysis suggests that projects backed by the country’s National Institutes of Health (NIH) have much broader economic benefits than suspected.

Between 1980 and 2007, 8.4% of NIH grants led directly to a patent, researchers report today in Science1. But more than three times that number — 30.8% — produced a scientific article that was later cited in a commercial patent for a drug, device or other medical technology. That indirect benefit was more pronounced for patents related to drugs sold in the United States, with less than 1% of NIH grants leading directly to patents but 5% spawning papers that were mentioned in a patent related to a drug that reached the market.

Politicians tend to focus on how often academic researchers obtain patents or create companies based on their work, says Marty Grueber, research director for the consulting firm TEConomy Partners in Cleveland, Ohio. But the analysis shows that research supported by the NIH has a surprisingly big indirect impact on patent activity — a proxy for overall economic benefit.

“Whether we focus on scientific or technological advancement, these findings underscore the value of investing in a diverse portfolio of work,” said Mike Lauer, the NIH’s deputy director for extramural research, in a statement.

The Science analysis comes at a pivotal moment for the agency. Trump has proposed cutting the NIH’s roughly US$32-billion budget by 18%, or $5.8 billion, in 2018. And the president is rumoured to be pushing for a $1.2-billion cut from the agency’s 2017 budget. Although it’s not clear whether Congress will accept Trump’s plans, the proposals have made researchers nervous.

Lawmakers who want to shrink the budget of science-funding agencies often single out studies that they view as wasteful. In January, for example, Republican Senator Jeff Flake of Arizona lampooned the NIH’s decision to spend $817,000 on a study about the evolution of proteins found in primate saliva — one of 50 projects that the senator highlighted in a report called ‘Wastebook: PORKémon Go’.

But it’s exactly this kind of basic research that can yield unexpected commercial windfalls, says study co-author Danielle Li, an economist at Harvard Business School in Boston, Massachusetts. “Just because a grant doesn’t seem to scream, ‘I’m going to be extremely commercially relevant’ or ‘I’m going to cure cancer’ doesn’t mean it might not cure cancer,” she says.

The study by Li and her colleagues, which examined more than 365,000 grants issued between 1980 and 2007, also considered whether funding for basic or applied research triggered more patents. The scientists sliced and diced the definition of ‘basic research’ every way they could think of, but in each of their analyses, basic and applied research were equally likely to be cited in patents.

“Their findings here demonstrate that there is commercial value to funding basic science,” says Ross DeVol, chief research officer at the Milken Institute, an economics think tank in Santa Monica, California. “That may be the most important piece of this, to be quite frank.”

Li’s study builds on a 2015 report in which Grueber showed that every $100 million the NIH hands out in grants leads to about six new patents2. Those estimates, however, omitted the knock-on effects of scientific papers — which are, after all, the main output of the academic system.

When Li and her colleagues included the impact of papers later cited by patents, they found that the average number of patents produced by a $100-million boost in NIH funding went up to 23. The researchers then used a series of rough calculations to extrapolate the commercial impact of those patents. As they report in a companion paper currently under review at an economics journal3, each $1 in NIH funding generates an estimated $1.40 in drug sales — a figure that doesn’t include the economic benefit accrued through the development of devices, surgical techniques, public-health improvements or other non-pharmaceutical applications of NIH-supported research.

From an economic standpoint, “we’re under-investing overall” in biomedical research, says Pierre Azoulay, an economist from the Massachusetts Institute of Technology’s Sloan School of Management in Cambridge, and Li’s co-author on both studies. “The idea that we’re going to get to a better place by cutting [the NIH budget] is ridiculous.”