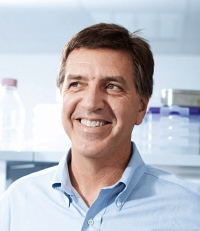 Stephen Strittmatter hopes that a failed cancer drug may work against Alzheimer’s.

On Monday, Stephen Strittmatter began recruiting for a clinical trial to test a treatment for Alzheimer’s disease. The study is also part of a bigger test for the US National Institutes of Health (NIH) and its fledgling translational research centre.

Strittmatter’s team is one of nine that won funding last month from the NIH’s National Center for Advancing Translational Sciences (NCATS) in Bethesda, Maryland, to see whether abandoned drugs can be aimed at new targets. Strittmatter, a neuro­biologist at Yale University in New Haven, Connecticut, hopes that a failed cancer drug called saracatinib can block an enzyme implicated in Alzheimer’s.

The money is not much — US$12.7 million split between the nine awards this year — but the symbolism is potent. NCATS, which launched in December 2011, has promised to find ways around obstacles that stymie the pharmaceutical industry. Legislators have been sceptical about the need for such a programme, but if the drug-resurrection initiative succeeds, it may win over critics in Congress, for whom repurposing drugs has appeal in an age of fiscal austerity.

Agency officials downplay the stakes, arguing that the programme’s chief aim is to establish new partnerships between industry and academia. Critics say that its scientific goal may be a tall order. “Others passed [on these drugs] because the scientific odds of success were low,” says Scott Gottlieb, a resident fellow at the conservative American Enterprise Institute in Washington DC, and a former deputy commissioner of the Food and Drug Administration. “The odds that NIH has some early wins are equally low.”

The projects are tackling conditions including alcoholism, schizophrenia and calcified aortic valves (see ‘Old drugs, new tricks’). But none targets an illness of more growing public health concern than Alzheimer’s, which is expected to afflict up to 16 million people in the United States by 2050, and will cost the country around $200 billion in 2013.

Saracatinib inhibits the Src family kinases (SFKs), enzymes that are commonly activated in cancer cells, and was first developed by London-based pharmaceutical company Astra­Zeneca. But the drug proved only marginally effective against cancer, and the company abandoned it — after spending millions of dollars to develop it through early human trials that proved that it was safe. With that work already done, Strittmatter’s group will be able to move the drug quickly into testing in people with early-stage Alzheimer’s disease.

The team plans to begin a 24-person safety and dosing trial in August. If the results are good, NCATS will fund the effort for two more years, during which the scientists will launch a double-blind, randomized, placebo-controlled trial with 159 participants. Over a year, the team will measure declines in glucose metabolism — a marker for progression of Alzheimer’s disease — in key brain regions, hoping to find that they have slowed.

“For this to happen in years instead of decades is only possible because of this programme,” says Strittmatter. The NIH worked with eight pharmaceutical companies to develop a model agreement for the firms and academic investigators; it specifies how intellectual property will be apportioned and gives the companies first right of refusal to license any discoveries.

Now NCATS must wait for results. Using saracatinib to treat Alzheimer’s is “a reasonable idea”, says Tony Hunter, director of the Salk Institute Cancer Center in La Jolla, California. The Yale researchers hope that the drug will slow or halt progression of the disease by blocking the activity of Fyn kinase, an SFK that has been shown to induce damage to brain synapses in mouse models of Alzheimer’s (J. Chin et al. J. Neurosci. 24, 4692–4697; 2004). But Hunter warns that there may be side effects. SFKs have many functions, so if high doses of saracatinib are needed to inhibit Fyn kinase action in the brain, they could do damage elsewhere.

Strittmatter says that the main side effect of concern to him is reduced white-blood-cell counts, which could increase risk of infection. However, in saracatinib cancer trials, that side effect occurred at higher doses than he intends to use.

NCATS is barred by law from funding trials beyond early phase II, so further money will have to come from another backer, such as Astra­Zeneca. For that, observers say, Stritt­matter will need startlingly good results.

“This is going to be hard for them to do,” says John LaMattina, a senior partner at PureTech Ventures, a life-sciences venture-capital company in Boston, Massachusetts, and former president of research and development at the drug-maker Pfizer in New York.

But fans of the NIH programme say that it is not reasonable to expect quick success, given the time-consuming nature of drug development. “The commitment to creative repurposing is wise and timely,” says Ann Bonham, chief scientific officer at the Association of American Medical Colleges in Washington DC. “Over time, even with a relatively modest success rate, the potential benefit is worth the investments.”