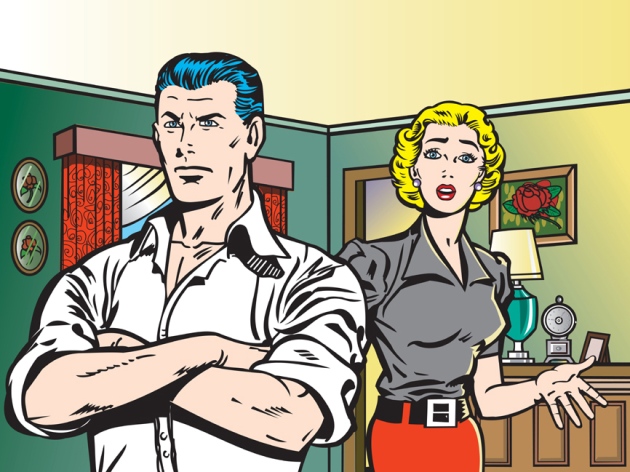 Spouses can have negative feelings about each other without being consciously aware of them — but the marriage could suffer in the long run.

The gut may know better than the head whether a marriage will be smooth sailing or will hit the rocks after the honeymoon fades, according to research published today in Science1.

Researchers have long known that new love can be blind, and that those in the midst of it can harbour positive illusions about their sweetheart and their future. Studies show that new couples rate their partner particularly generously, forgetting his or her bad qualities, and generally view their relationship as more likely to succeed than average2. But newlyweds are also under a lot of conscious pressure to be happy — or, at least, to think they are.

Now a four-year study of 135 young couples has found that split-second, 'visceral' reactions about their partner are important, too. The results show that these automatic attitudes, which aren’t nearly as rosy as the more deliberate ones, can predict eventual changes in people’s marital happiness, perhaps even more so than the details that people consciously admit.

The researchers, led by psychologist James McNulty of Florida State University in Tallahassee, tapped into these implicit attitudes by seeing how fast newlyweds could correctly classify positively and negatively themed words after being primed by a photo of their spouse for a fraction of a second. If seeing a blink-of-the-eye flash of a partner’s face conjures up immediate, positive gut-level associations, for example, the participant will be quicker to report that 'awesome' is a positive word and slower to report that 'awful' is a negative one. Researchers used the difference between these two reaction times as a measurement of a participant’s automatic reaction.

After measuring these initial gut reactions, the team checked in with the couples every six months for four years and found, perhaps predictably, that marital satisfaction tended to slide for everyone as the 'honeymoon' phase wore off. But participants who had more negative gut-level attitudes about their partner soon after the wedding saw their happiness drop faster than those who had more positive automatic reactions, and the more positive group experienced less of an eventual drop-off in happiness. Although by Nature's calculation the split-second attitudes explained only about 2% of the differences in people’s happiness, the effect was enough to be statistically significant, holding equally for men and women, even when controlling for other factors such as physical attractiveness, self-esteem and people’s automatic reactions to attractive strangers.

Conversely, newlyweds’ explicit attitudes towards their marriage did not correlate with their implicit attitudes, and did not significantly predict how much their happiness would change. “If we have negative gut-level reactions to our partners, we might not be willing to admit that to ourselves and certainly not to other people,” McNulty says. “This procedure allowed us to tap into more immediate responses.”

“The findings are certainly plausible and intriguing,” says psychologist Garth Fletcher at Victoria University of Wellington. “But they need to be placed in the context of other research.” Although the study failed to find a significant effect for explicit attitudes, he says, much previous research has shown that explicit attitudes and perceptions of the partner and the relationship can strongly predict how long a marriage will last.

Moreover, cause-and-effect mechanisms in the study are not entirely clear: some research suggests that automatic attitudes could be what's causing the marriage to falter or thrive, rather than the other way around, says social psychologist Bertram Gawronski of the University of Western Ontario in Canada. When we are confronted with a partner’s inscrutable facial expression, for example, a positive gut-level reaction will probably lead us to interpret it as a smile rather than a grimace, and by responding in a similarly cheerful manner we elicit positive behaviour, thus creating a self-fulfilling prophecy, he says.

If it turns out that gut-level reactions do change people’s behaviour, there is potential for a therapeutic application, McNulty says. Research has shown, for example, that it is possible to reduce implicit racist attitudes in white participants through repeated exposure to strategically paired positive words and images of black people3. “If this does have an active causal role, and if we can strengthen these positive associations that people might have with their partner, then it might help people see the positive side of the relationship and engage in more constructive behaviour. It’s a direction for future research.”

Future extensions might also support the pop-psychology canard to “just trust your gut” when it comes to marriage, McNulty says. Research has shown, for instance, that when people are instructed, “tell the truth” but at the same time “don’t think so hard”, they end up making more accurate self-assessments than they would otherwise4. This seems to be because these automatic attitudes emerge as semi-conscious gut feelings, McNulty says. “It’s information we can access, but we frequently choose not to.”