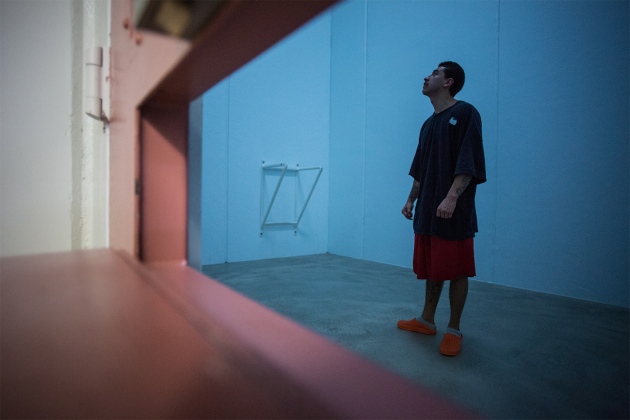 An inmate watches nature videos in a designated room at Snake River Correctional Institution in Oregon.

A little bit of nature can calm even the most stressed populations of people, according to a study conducted on prisoners in solitary confinement.

In the experiment, researchers found that prisoners who watched videos with nature scenes felt less stressed and weren’t as violent as those who didn’t. The team, led by ecologist Nalini Nadkarni at the University of Utah in Salt Lake City, published their findings on 1 September in Frontiers in Ecology and the Environment1.

Nadkarni first proposed the study in 2010 while visiting a prison that housed criminals who were considered to be the highest security risks. “Six guards in Kevlar vests and full riot gear had to go in and subdue an inmate in a restraining chair,” she says. “I thought, wow, if we could just calm them with nature rather than with Kevlar vests and riot gear, that would be really great.” But it took Nadkarni years to find a prison that was willing to let her test her hypothesis.

The experiment's results have now convinced some prison officials to offer inmates access to nature videos. However, critics of the study argue that it could be used to justify the continued use of solitary confinement — a practice that some consider too harsh.

Past research has shown that regularly seeing plants — even from a window — can improve hospital patients’ and prison inmates’ physical and mental health2. Nadkarni went further by studying people in solitary confinement, where inmates typically spend 23 hours a day alone in bare-walled cells.

Her team divided inmates at the Snake River Correctional Institution in Ontario, Oregon, into 2 groups of 24. Those in one group could choose to exercise or, up to five times per week, go to a 'blue room' to watch 45-minute-long videos showing natural scenes such as mountains, forests and oceans. Those in the other group were offered exercise, but no videos.

The researchers and prison staff measured inmates’ moods and stress levels, and tracked violent incidents over a year. They found that inmates who had access to videos reported feeling calmer and were involved in 26% fewer violent incidents. The results suggest that nature imagery can help even society’s most nature-deprived populations, which includes prison inmates, but also residents of nursing homes and inner city areas, says Nadkarni.

The blue room has also helped Snake River to save thousands of dollars in medical costs resulting from altercations and self-harm, says Renee Smith, the institution’s behavioral health systems manager. “We were pretty excited,” she says. The programme is already being replicated in three other states. 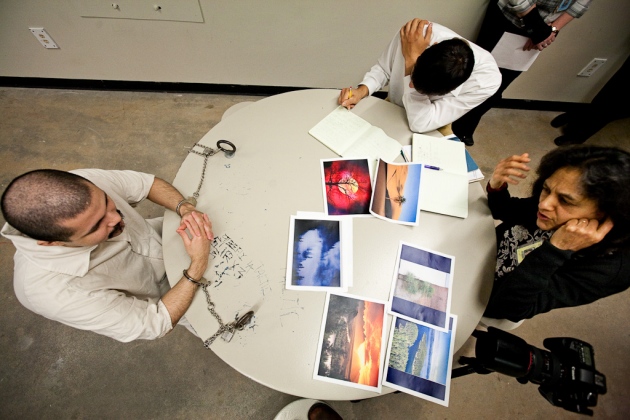 Nalini Nadkarni interviews a prisoner who participated in the study.

“It’s certainly a pretty creative naturalistic experiment,” says Lisa Nisbet, a psychologist at Trent University in Peterborough, Canada. “You couldn’t get a much more deprived group of people.”

But she and others caution that it is impossible to know whether exposure to nature had the beneficial effect because no group was shown videos with other content. Without this additional control group, “you can’t really draw any definitive conclusions,” says Marc Berman, a psychologist at the University of Chicago in Illinois.

The study authors acknowledge this limitation, which they say is due to there being an insufficient number of prison staff to implement the additional control condition. But they say that inmates specifically mentioned the videos’ nature content during interviews. One wrote: “The nature project help’s [sic] me think clearer to know there is so much more beauty in this world then [sic] this prison”.

Not everyone is embracing the study. Opponents of solitary confinement worry that the paper could provide cover for perpetuating a practice that many consider to be cruel and counterproductive. “I would hate to think that this study will be used to justify keeping solitary confinement prisoners in conditions where they are deprived of opportunities to actually experience nature,” says Craig Haney, a psychologist at the University of California, Santa Cruz.

Nadkarni says her collaboration has helped inmates even if it hasn’t dramatically reformed the prison system. “As an ecologist, it is not in my power to change the system of mass incarceration,” she says. “One thing I can do is think about ways that bring the therapeutic value of nature to people who are incarcerated.”