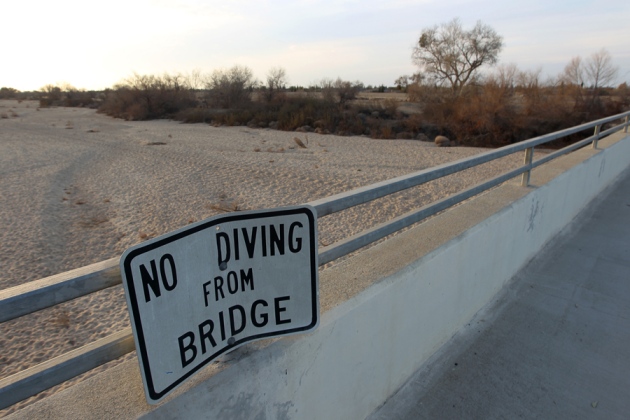 Peter Moyle has seen a lot in five decades of roaming California’s streams and rivers and gathering data on the fish that live in them. But last month he saw something new: tributaries of the Navarro River, which rises in vineyards before snaking through a redwood forest to the Pacific, had dried up completely.

“They looked in July like they normally look in September or October, at the end of the dry season,” says Moyle, a fish biologist at the University of California, Davis.

Blame the drought. The Navarro and its hard-pressed inhabitants are just one example of stresses facing a parched state. From the towering Sierra Nevada mountains — where the snowpack this May was only 18% of the average — to the broad Sacramento–San Joaquin river delta, the record-setting drought is reshaping California’s ecosystems.

It is also giving researchers a glimpse of the future. California has always had an extreme hydrological cycle, with parching droughts interrupted by drenching Pacific storms (see ‘Extreme hydrology’). But scientists say that the current drought — now in its third year — holds lessons for what to expect 50 years from now.

“The west has always gone through this, but we’ll be going through it at perhaps a more rapid cycle,” says Mark Schwartz, a plant ecologist and director of the John Muir Institute of the Environment at the University of California, Davis. He and others are discussing the drought’s ecological consequences at the annual meeting of the Ecological Society of America, which runs from 10 to 15 August in Sacramento, California. He says that the state’s plant and animal species are at risk in part because California ecosystems are already highly modified and vulnerable to a variety of stresses. 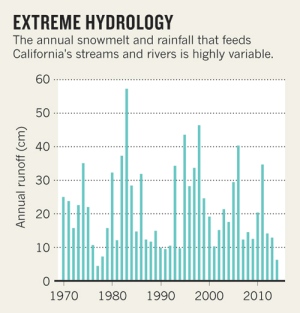 Many of the state’s 129 species of native inland fish, including several types of salmon, are listed by federal or state agencies under various levels of endangerment. “We’re starting from a pretty low spot,” says Moyle. He hopes to use the current drought to explore where native fish have the best chances of surviving.

That could be in dammed streams such as Putah Creek near the Davis campus, where water flow can be controlled to optimize native fish survival. Another focus might be on spring-fed streams such as those that flow down from volcanic terrain in northernmost California and can survive drought much longer than snow-fed streams.

In the late 1970s, Moyle discovered that native fish in the Monterey Bay watershed recolonized their streams relatively quickly after a two-year drought. But today’s streams face greater ecological pressures, such as more dams and more non-native species competing for habitat.

Other challenges arise in the delta where the Sacramento and San Joaquin rivers meet, north-east of San Francisco. An invasive saltwater clam (Potamocorbula amurensis) has taken advantage of warming river waters and moved several kilometres upriver, says Janet Thompson, an aquatic ecologist with the US Geological Survey (USGS) in Menlo Park, California.

Potamocorbula out-competes a freshwater clam (Corbicula fluminea), and accumulates about four times as much of the element selenium from agricultural run-off and refineries as its freshwater cousin does. When endangered sturgeon feed on Potamocorbula, the fish consume much more selenium than is optimal. “That’s the biggest shift that we’ve seen that’s of environmental concern,” says Thompson. “These are the kinds of things that can have a lasting effect on a predator species.”

Teasing out the drought’s effects on terrestrial animals is tougher. Researchers have documented drops in various California bird populations this year, such as mallard ducks (Anas platyrynchos) and tricolor blackbirds (Agelaius tricolor). But many other factors — especially habitat loss — also come into play, so it becomes hard to isolate the effects of drought.

The drought’s effects on larger animals such as bears are also uncertain. Anecdotal reports suggest that more bears than usual are showing up closer to people this year, says Jason Holley, a wildlife biologist at the California Department of Fish and Wildlife in Rancho Cordova. Within the space of six weeks this spring, four black bears appeared along the Sacramento River corridor, much farther out of the mountains than normal. “Those sorts of calls definitely pique your interest,” says Holley, who thinks that dry conditions in the mountains might be pushing bears closer to populated areas.

The longest-lasting effect could be on California’s forests, including its iconic giant sequoias. The drought has handed forest ecologists an unplanned experiment, says Phillip van Mantgem, a forestry expert at the USGS in Arcata, California, who is speaking at the Sacramento meeting.

Researchers are gathering data to examine whether thinning of plots in the forest, in part to reduce fire risk, might help trees do better under drought. Tests may also help to reveal the main mechanisms by which drought kills different tree species, whether by interrupting the flow of water within the tree or by starving it. “I’m really curious to see how this turns out,” van Mantgem says.

There should be plenty of time to gather data. Climatologists expect an El Niño weather pattern to form in the Pacific this year, which usually brings more rain and snow to parts of California (see Nature 508, 20–21; 2014). But the pending El Niño looks to be weaker than first expected, and may not have much, if any, influence on ending the drought. Chances are that the state will remain dry well into 2015.