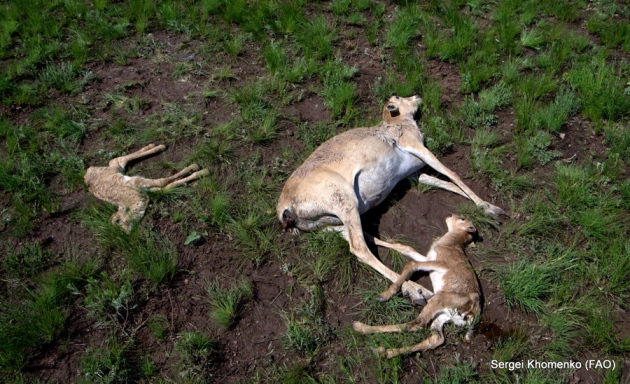 Tens of thousands of saiga have died in Kazakhstan.

Nearly half of the global population of the critically endangered saiga antelope (Saiga tatarica) is feared dead in a mass die-off. Authorities in Kazakhstan, where the animals live, began to notice a spike in deaths in mid-May and losses quickly mounted to more than 120,000 in total. Nature digs into what may be killing the animals.

What is a saiga?

The saiga is a nomadic antelope that lives in large herds, sometimes comprising thousands of individuals, on the steppe grasslands and semi-arid deserts of central Asia. The fossil record reveals that their prehistoric range stretched from the United Kingdom to Alaska1. But in the past few centuries, the animals have been reduced to four discrete populations: one in Kalmykia in the southwest corner of Russia and three in Kazakhstan. There is a population in Mongolia, but these animals are considered a separate subspecies (S. tatarica mongolica).

How significant are the latest losses?

Saigas are known to be prone to massive, as yet unexplained die-offs. These usually occur when the females come together to calve in the spring. In 1984, such an event in the Ural Mountains resulted in the loss of 100,000 animals — 67% of the local population. There were several smaller scale die-offs in the 2000s. But this year’s mass-death event among animals living in the Betpak-Dala region of Kazakhstan is much more significant as entire herds are dying.

“I have worked in veterinary diseases all my career and I have never seen 100% mortality,” says Richard Kock, a wildlife veterinarian at the Royal Veterinary College in Hatfield, UK, who flew out to Kazakhstan last month to assist with efforts to make sense of the devastation. “We had a herd of 60,000 aggregated and they all died. That is extraordinary.”

Do we know the cause of these die-offs?

Nobody collected detailed data for past events, so there was no way to address this question. But since the 2010 die-off, the Kazakh authorities — assisted by the United Nations' convention on migratory species and the wider international community — have been strengthening their capacity to collect, process and analyse samples from the field. “We managed to do full necropsies on 50 saiga,” says Kock, who returned from Kazakhstan on 28 May.

The cause is unlikely to have been an infectious agent that was transmitted from one animal to the next. “Epidemiologically, you cannot get a directly transmitted disease to kill a whole population in seven days,” says Kock. “I’d say it’s a polymicrobial disease,” he says. This involves pathogens such as pasteurella and clostridia that are often present in the body but have seized an opportunity to run riot.

The pathogens may have been responsible for the deaths, but something must have caused the saigas to fall victim to them. Given that two discrete sub-populations some 300 kilometres apart suffered similarly and simultaneously, it seems likely that an environmental factor is part of the story.

Why is this work important?

With a better understanding of the constellation of factors that probably lies behind such mass mortality, it might be possible to avoid such events in the future. “This time is the first time we are going to be able to get a good diagnosis,” says E. J. Milner-Gulland, a conservation biologist at Imperial College London and chair of the Saiga Conservation Alliance.

This is important because mortality on this scale can wipe out entire herds. In some ways, it is fortunate that the Betpak-Dala population was hit this time. “It’s the largest population and can probably stand it. All the other populations are at such a low level that they could be wiped out within a week,” says Milner-Gulland.

Why is the saiga in such trouble?

Towards the end of the nineteenth century, widespread hunting brought the species close to extinction. There was some recovery in the twentieth century, but the end of the Soviet era brought about a dramatic collapse. With rural poverty, a willing market for meat and horns in China and little law enforcement or management, people killed saigas in huge numbers. “Those three things together caused a 95% decline over a ten-year-period,” says Milner-Gulland.

Owing to this precipitous decline, the saiga is listed on the International Union for Conservation of Nature's Red List of Threatened Species in one of the highest categories: critically endangered.

At the latest count, announced in April 2014, the global population stood at 262,000, up more than 200,000 from the lowest point in the early 2000s. Much of that increase was driven by growth in the population that is now being devastated.