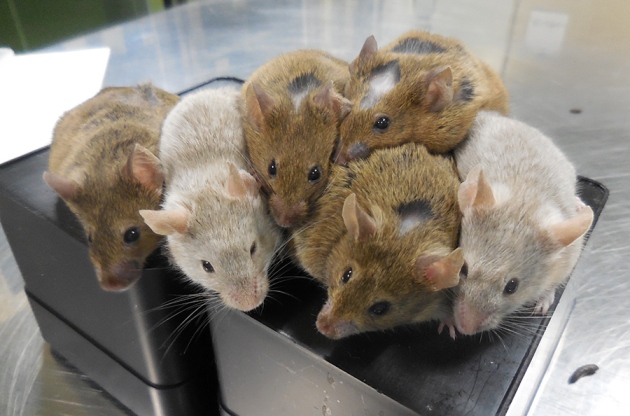 These eleven-month-old mice were born from eggs made entirely in a dish.

In a tour de force of reproductive biology, scientists in Japan have transformed mouse skin cells into eggs in a dish, and used those eggs to birth fertile pups. The report marks the first creation of eggs entirely outside a mouse. If the process could be made to work for humans, researchers could produce artificial eggs without needing to implant immature cells into ovaries to complete their development.

Katsuhiko Hayashi, a reproductive biologist at Kyushu University in Fukuoka, led the group that announced the breakthrough on 17 October in Nature1. In 2012, when at the University of Kyoto, he and stem-cell biologist Mitinori Saitou reported taking skin cells down the pathway towards eggs: reprogramming them to embryonic-like stem cells and then into primordial germ cells (PGCs)2. These early cells emerge as an embryo develops, and later give rise to sperm or eggs. But to get the PGCs to form mature eggs, the researchers had to transfer them into the ovaries of living mice.

The next advance came in July 2016, when a team led by Yayoi Obata, at the Tokyo University of Agriculture, reported transforming PGCs extracted from mouse fetuses into oocytes (egg cells) without using a live mammal3. Working with Obata, Hayashi and Saitou have now completed the cycle: from skin cells to functional eggs in a dish. With the use of in-vitro fertilization (IVF) techniques, 26 healthy pups were born (some originally from embryonic stem cells and some from reprogrammed skin cells). Hayashi says some of these animals gave birth to a second generation of mice.

“This is truly amazing,” says Jacob Hanna, a stem cell biologist at the Weizmann Institute of Science in Rehovot, Israel.  “To be able to make robust and functional mouse oocytes over and over again entirely in a dish, and see the entire process without the 'black box' of having to do any of the steps in host animals, is most exciting.”

“Parts of this work were done before — here they are put together in completeness. It’s impressive that they got pups that way,” says Dieter Egli, a stem cell biologist at the New York Stem Cell Foundation Research Institute. 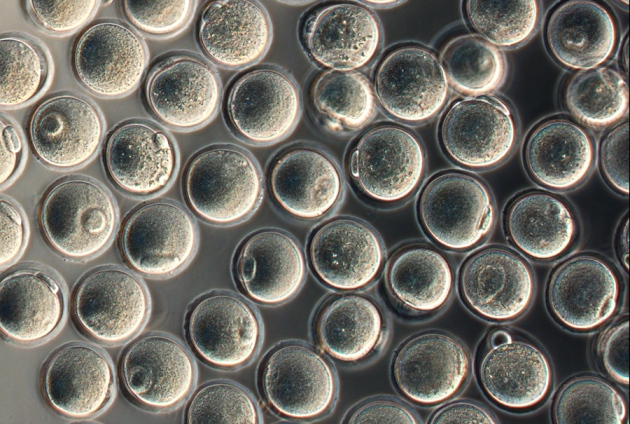 Egg cells in a dish: artificial mouse oocytes created from embryonic stem cells. Researchers have also made eggs from skin cells reprogrammed into an embryonic-like state.

Hayashi says the procedure is robust — although technically challenging — and that different groups in his lab have reproduced it. Although the biologists did not need to implant the PGCs into living mice, they did need to add cells taken from the ovaries of other mouse fetuses — effectively, to create an ovary-like support in which the eggs could grow. Hayashi is now trying to concoct an artificial reagent that could replace these cells in his protocol.

The egg-in-a-dish feat comes after researchers in China said in February that they had made rudimentary mouse sperm in a dish4. In that case, the researchers created ‘spermatids’, which are not fully mature cells, although they did claim to use them to create offspring.

From mice to humans

Hayashi says the work will help him study egg development, now that he can make them fully in a dish. He is not trying to make functional human eggs in the lab. (Japanese guidelines forbid fertilization of engineered human germ cells, even for research purposes). But he suspects that others will try. “I do not think it is going to prove much more complex,” says Hanna — who himself hopes to create human eggs.

Hanna co-led the team that reported the first artificial human PGCs in 2014, just two years after Hayashi’s work with mice5. For ethical reasons, he has not implanted them in humans to try to mature them into sperm or eggs. But prospects of maturing human PGCs in a dish are enticing. Hanna’s laboratory has already been conducting similar experiments to those described in Hayashi’s new paper, he says. One challenge will be to obtain the necessary supporting ovarian (or, for sperm, testicular) cells; currently, the process only works with fetal cells. But he hopes that similar cells from pigs or monkeys might work.

If the Hayashi protocol works with human cells, it could in principle be used to make eggs from a man’s skin cells, Hanna says — adding that, as a pro-LGBT rights activist, he thinks that this option is “legitimate to explore when the right time comes.” Hayashi, however, has yet to use male skin cells to produce eggs in mice.

Hayashi thinks that “oocyte-like” human eggs might be produced within ten years, but he doubts that they will be of sufficient quality for fertility treatments. “It is too preliminary to use artificial oocytes in the clinic,” he says, cautioning that his study showed that the artificial mouse eggs were often of low quality. He worries that such eggs might create genetically abnormal embryos, and potentially abnormal offspring. In the study, only 3.5% of the early embryos created from artificial eggs gave rise to pups — compared with 60% of eggs that were matured inside a mouse.

But debate over the ethics of such a technology should begin now, says Azim Surani, a pioneer in the field at the University of Cambridge, UK. “This is the right time to involve the wider public in these discussions, long before and in case the procedure becomes feasible in humans,” he says.