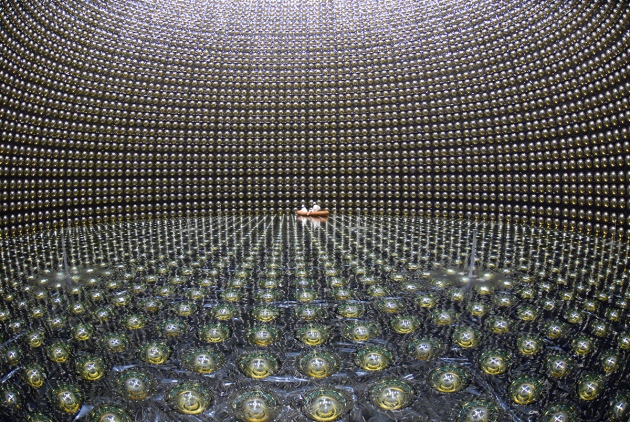 The Super-Kamiokande detector near Hida, Japan, is searching for differences in behaviour between matter and antimatter neutrinos.

Why the Universe is filled with matter, rather than antimatter, is one of physics’ greatest mysteries. An experiment in Japan has now glimpsed a possible explanation: subatomic particles called neutrinos might behave differently in their matter and antimatter forms.

The disparity, announced at the International Conference on High Energy Physics (ICHEP) in Chicago, Illinois, on 6 August, may turn out not to be real: more data will need to be gathered to be sure. “You would probably bet that this difference exists in neutrinos, but it would be premature to state that we can see it,” says André de Gouvêa, a theoretical physicist at Northwestern University in Evanston, Illinois.

Even so, the announcement is likely to increase excitement over studies of neutrinos, the abundant but elusive particles that seem increasingly key to solving all kinds of puzzles in physics.

In the 1990s, neutrinos were found1, 2 to defy the predictions of physics' standard model — a successful, but incomplete, description of nature — by virtue of possessing mass, rather than being entirely massless. Since then, neutrino experiments have sprouted up around the world, and researchers are realizing that they should look to these particles for new explanations in physics, says Keith Matera, a physicist on a US-based neutrino experiment called NOvA at the Fermi National Accelerator Laboratory (Fermilab) in Batavia, Illinois. “They are the crack in the standard model,” he says.

The excess of matter over antimatter in our Universe is extraordinary, because if the mirror-image particles were produced in equal quantities after the Big Bang, they would have annihilated each other on contact, leaving nothing but radiation. Physicists have observed differences in the behaviour of some matter particles and antimatter particles, such as kaons and B mesons — but not enough to explain the dominance of matter in the Universe.

One answer might be that super-heavy particles decayed in the early Universe in an asymmetric fashion and produced more matter than antimatter. Some physicists think that a heavyweight relative of the neutrino could be the culprit. Under this theory, if neutrinos and antineutrinos behave differently today, then a similar imbalance in their ancient counterparts could explain the overabundance of matter.

To test this, researchers on the Tokai to Kamioka (T2K) experiment in Japan looked for differences in the way that matter and antimatter neutrinos oscillate between three types, or ‘flavours’, as they travel (see 'Changing flavours'). They shot beams of neutrinos of one flavour — muon neutrinos — from the Japan Proton Accelerator Research Complex in the seaside village of Tokaimura to the Super-Kamiokande detector, an underground steel tank more than 295 kilometres away and filled with 50,000 tons of water. The team counted how many electron neutrinos appeared — a sign that the muon neutrinos had morphed into a different flavour along the journey. They then repeated the experiment with a beam of muon antineutrinos.

The two beams behaved slightly differently, said Konosuke Iwamoto, a physicist at the University of Rochester, New York, during his presentation at ICHEP.

The team expected that if there were no difference between matter and antimatter, their detector would have, after almost 6 years of experiments, seen 24 electron neutrinos and — because antimatter is harder to produce and detect — 7 electron antineutrinos.

Instead, they saw 32 neutrinos and 4 antineutrinos arrive in their detector. “Without getting into complicated mathematics, this suggests that matter and antimatter do not oscillate in the same way,” says Chang Kee Jung, a physicist at Stony Brook University in New York and a member of the T2K experiment.

Preliminary findings from the T2K and NOvA experiments had hinted at the same idea. But the observations so far could be a chance fluctuation; there is a 1 in 20 chance (or in statistical terms, about 2 sigma) of seeing these results if neutrinos and antineutrinos behave identically, points out Jung.

It will take much more data to confirm the signal. By the end of its current run in 2021, the T2K experiment should have five times more data than it has today. But the team will need 13 times more data to push statistical confidence in the finding to 3 sigma, a statistical threshold beyond which most physicists would accept the data as reasonable — but not completely convincing — evidence of the asymmetry.

Two are better than one

The T2K team has proposed extending its experiment to 2025 in order to gather the necessary data. But it is trying to speed up data-gathering by combining results with those from NOvA, which sends a neutrino beam 810 kilometres from Fermilab to a mine in northern Minnesota. NOvA has been shooting neutrino beams; it will switch to antineutrino beams in 2017. The two groups have agreed to produce a joint analysis and could together reach 3 sigma by around 2020, says Jung.

Reaching the statistical certainty needed to announce a formal discovery — 5 sigma — could require a new generation of neutrino experiments already being planned around the world.

Researchers from the NOvA experiment presented another exciting but preliminary finding at the ICHEP, also deduced from the study of the rate at which muon neutrinos switch to electron neutrinos: a hint at a resolution for which of neutrinos’ three different mass states is the heaviest.They found their results slightly favour a normal mass order, rather than an inverted one. Knowing which it is would help scientists to decide between rival theories about how the four forces of nature unite as a single force at high energies, such as during the Big Bang.

Physicists are racking up discoveries about neutrinos on an almost annual basis, says de Gouvêa: “For the timescales of particle physics, this is changing really, really quickly.”

Neutrinos oscillate between flavours because they do not have a definite mass. Instead, each neutrino is a mixture — known as a quantum superposition — of three different ‘mass states’.  Different proportions of the states create the different flavours, named electron, muon and tau. (The names allude to the sister particles that are produced on the rare occasions when neutrinos interact with matter.) The waves that make up the mass states move at different speeds, separating and interfering with each other as the neutrino travels. Ultimately, this behaviour gives the neutrino a particular probability of having switched its flavour by the time it is detected.

It was the observation of neutrino oscillation in the 1990s that first implied that neutrinos had mass at all — contrary to the standard model of particle physics. That finding won Takaaki Kajita of the University of Tokyo and Arthur McDonald of Queen’s University in Kingston, Canada, the 2015 Nobel Prize in Physics. The latest T2K results — which suggest that neutrinos and antineutrinos oscillate between flavours in different ways — hint that the interference between mass states might be different between neutrino matter and antimatter.