Australian researchers last week began the controlled release of thousands of mosquitoes at two coastal Queensland towns in a trial to see if they can halt the transmission of dengue fever.

The virus that causes dengue is spread largely by the mosquito Aedes aegypti, but the mosquitoes taking wing in Queensland are infected with a bacterium called Wolbachia, which stops the virus from reproducing. 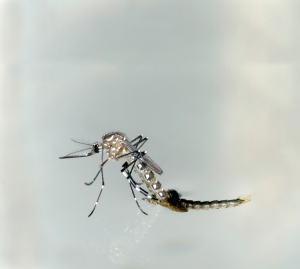 Mosquitoes infected with Wolbachia are unable to transmit dengue fever.

Dengue fever infects some 50 million people each year. Its range is expanding and, because A. aegypti is active during the day, many control strategies that help prevent malaria, such as bed nets, are ineffective.

Researchers led by Scott O’Neill at Monash University in Melbourne, Australia, last year showed that Wolbachia pipientis, a bacterium commonly found in insects and nematodes could be used to control dengue fever because of the way it inhibits viral replication in the mosquitoes1.

Using a Wolbachia strain called wMel, O’Neill and his team released infected mosquitoes in two Queensland towns last January. Within 14 weeks, Wolbachia had spread to more than 90% of the local A. aegypti populations2. The latest estimates show it is now close to 100%. “It exceeded expectations,” says O’Neill.

But this was only a partial success. Although the wMel strain spread effectively, it is not the ideal strain for the job — it is ‘leaky’, meaning that some of the infected mosquitoes can still transmit the dengue virus. O’Neill and his team used it because the more effective strains reduce the mosquitoes’ life-span and reproduction rate, which in turn inhibits the spread of the bacterium into the mosquito population.

Buoyed by the unexpectedly robust spread of wMel, the team last week began the phased release of 200,000 mosquitoes infected with wMelPop-CLA, a strain that is 100% successful at preventing the transmission of dengue. O’Neill expects this strain to repeat the success of wMel and proliferate, and so "completely block dengue transmission”.

How Wolbachia inhibits the virus is not clear, but clues are emerging. Last year, researchers led by Zhiyong Xi at Michigan State University in East Lansing reported that the bacterial infection produces reactive oxygen that in turn activates the mosquitoes’ immune system3. Still, the picture is cloudy. “We also get virus interference in Drosophila without immune activation, so something else is also going on that isn't fully understood at the moment,” says O’Neill.

Duane Gubler, a dengue expert at the Duke-NUS Graduate Medical School in Singapore and a member of the scientific advisory board for the Australian project, says that the Wolbachia strategy could be a safe and effective way to control dengue without having an ecological impact. “As the majority of insects already have Wolbachia infections, and considering the difficulty different Wolbachia species have in infecting other insect species, there should be no concern that the MelPop strain will spread to other insects,” says Gubler.

But Daniel Strickman, national programme leader for veterinary and medical entomology at the US Department of Agriculture, says that he has “some discomfort” with releasing an agent that could spread “uncontrollably and internationally” in a way that does not occur in nature. “The main damage might not be ecological, but cultural, as governments are stimulated to over-regulate promising vector-suppression tools because the first ones were applied without thorough evaluation,” he says.

Strickman says there is also a risk that by making the mosquitoes less susceptible to dengue infection, they may become more susceptible to other viruses such as Japanese encephalitis.

O’Neill says that is “extremely unlikely”. His results indicate that mosquitoes infected with Wolbachia are actually less susceptible to a wide range of pathogens that they would normally transmit, including chikungunya and yellow fever.

So far, O’Neill adds, there is no sign of the Wolbachia infection spreading beyond the Queensland release areas. More than 20% of a mosquito population needs to be infected with the bacterium for it to be able to successfully persist, and A. aegypti populations tend to stay in one place, making it hard for fresh populations to reach the tipping point. “This makes it unlikely that it will spread in an uncontrolled manner,” says O’Neill. “The sites we are working in are quite small and manageable — we could eradicate the mosquito locally with insecticides if we wanted to control it.”

The dengue-defeating mosquitoes still need to prove that they can cut transmission rates to humans. The Australian test areas have only sporadic transmission to humans — not enough to provide reliable baseline figures. “We couldn’t get statistically significant results there,” says O’Neill.

The next step will be to test the mosquitoes in areas where the impact on human transmission rates could easily be seen. Such trials would take “at least a couple years”, and O’Neill hopes to get government approval to start in Vietnam and Indonesia this summer with the wMelPop-CLA strain.