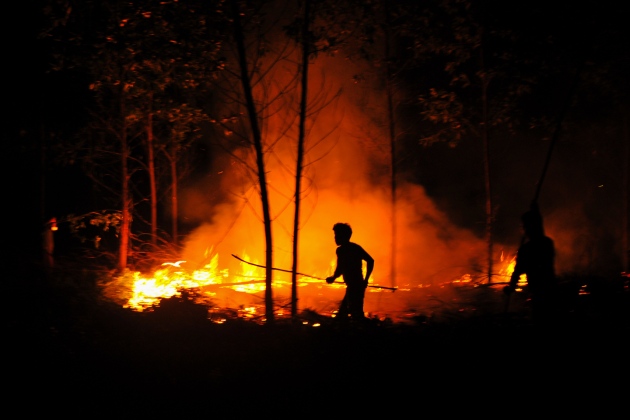 The number and severity of forest fires in Asia — such as this blaze in Indonesia — increased during the recent El Niño weather event.

The monster El Niño weather pattern of 2014–16 caused tropical forests to burp up 3 billion tonnes of carbon, according to a new analysis. That's equivalent to nearly 20% of the emissions produced during the same period by burning fossil fuels and making cement.

Measurements taken by NASA’s Orbiting Carbon Observatory-2 (OCO-2) satellite, which measures the level of carbon dioxide in the atmosphere, suggest that El Niño boosted emissions in three ways. A combination of high temperatures and drought increased the number and severity of wildfires in southeast Asia, while drought stunted plant growth in the Amazon rainforest, reducing the amount of carbon it absorbed. And in Africa, a combination of warming temperatures and near-normal rainfall increased the rate at which forests exhaled CO2.

The overall jump in emissions from tropical forests was roughly three times the annual average carbon output from deforestation and land-use change globally between 2006 and 20151.

The analysis, presented on 7 August at a meeting of the Ecological Society of America in Portland, Oregon, is a coup for OCO-2. Since 2014, the satellite has given scientists their best view yet of how human activities and natural systems affect the ebb and flow of CO2 emissions.

The El Niño work “is a very profound discovery”, says Berrien Moore, an atmospheric scientist at the University of Oklahoma in Norman and co-author of a forthcoming paper on the results.

Scientists have used satellites to study living plants for decades. But until recently, these probes could provide only indirect measurements of how vegetation influences the level of carbon in the atmosphere, by monitoring factors such as plant biomass and greenness. OCO-2, one of a new class of satellites to track CO2 from space, has changed this — and the 2014–16 El Niño was one of its first big tests.

“In the past we had to model how those vegetation changes affected carbon dioxide,” says David Schimel, an ecologist at NASA’s Jet Propulsion Laboratory in Pasadena, California, who presented the results. “Now we’re getting a chance to see what we got right and what we got wrong.” Combining data from OCO-2 and satellites that measure methane and carbon monoxide is giving Schimel and his colleagues a detailed view of how forests around the world respond to El Niño’s climate shocks.

All three of the emissions-increasing mechanisms that the team points to had been previously identified as ways in which extreme weather events could affect plants, says Abigail Swann, an atmospheric scientist and biologist at the University of Washington in Seattle. “What’s interesting is that they all happened,” she says. “It suggests that [El Niño response] is going to be a more complicated combination of factors in the future.”

The 2014–16 event is also the first large El Niño for which the effects are visible in annual maps of tree cover based on imagery from the US government’s Landsat probes and the European Space Agency’s Sentinel satellites. Preliminary calculations by the maps' maker, geographer Matthew Hansen of the University of Maryland in College Park, show that the number of trees lost worldwide increased by about 50% from 2015 to 2016. Tropical forests in South America, Asia and Africa were the hardest hit.

But some uncertainties remain about the El Niño’s effect on forests. Hansen sees evidence that the area of burned forest increased substantially in Central Africa and in Brazil, where annual tree loss roughly doubled, but OCO-2 does not. Hansen notes that the CO2-monitoring satellite’s view is much less sharp than those of Landsat and Sentinel, which could cause it to miss some fires. OCO-2 leaders agree that the satellite does not provide the last word on emissions; it samples 10-kilometre-wide swathes of ground that add up to only around 6% of the planet’s surface, from which researchers must extrapolate global numbers. But despite its limitations, OCO-2 provides today’s best carbon measurements.

Help may be on the way, however. A fleet of instruments that will be sent to the International Space Station in 2018 could give scientists sharper views of plants’ responses to future extreme climate events. NASA’s Global Ecosystem Dynamics Investigation (GEDI) will measure forest biomass, and the agency’s Ecosystem Spaceborne Thermal Radiometer Experiment on Space Station (ECOSTRESS) will measure plants’ water use. The Japanese Hyperspectral Imager Suite (HISUI) will help to monitor plants' molecular composition and species diversity.

These may be joined by a fourth instrument: the Orbiting Carbon Observatory-3 (OCO-3), built with spare parts from OCO-2. US President Donald Trump and his administration have proposed to cancel OCO-3, but it is not clear whether Congress will agree.