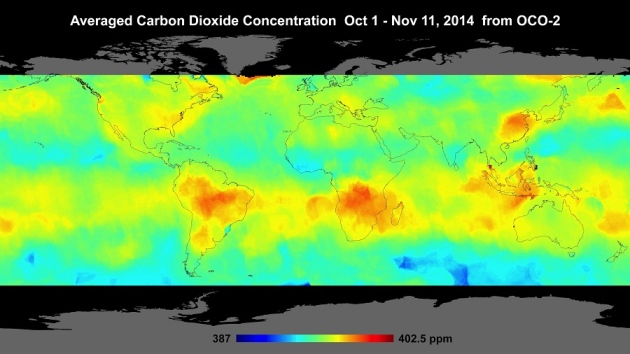 NASA’s carbon-monitoring satellite has passed its post-launch checks and is beaming high-quality data back to Earth. But getting to this point required some last-minute adjustments. After the Orbiting Carbon Observatory-2 (OCO-2) launched in July, the agency had to overcome a key design problem with the spacecraft that had gone unnoticed for a decade of planning.

News of the satellite’s status came on 18 December, in a briefing at the American Geophysical Union meeting in San Francisco, California, where OCO-2 scientists released the first images from the probe. “The results and the promise of this mission are quite amazing,” said Annmarie Eldering, deputy project scientist for OCO-2 at NASA’s Jet Propulsion Laboratory (JPL) in Pasadena, California.

The data from OCO-2 — which maps the concentration of carbon dioxide in the atmosphere as it circles the globe — were a long time coming. Scientists and engineers on the project have ridden an emotional roller coaster. In 2009, a rocket failure doomed the Orbiting Carbon Observatory, their first attempt at a carbon-mapping probe.

Its replacement, OCO-2, launched successfully. But after the JPL turned on the main instrument — a trio of spectrometers that measure sunlight light reflecting off Earth’s surface — the team discovered a problem in OCO-2’s data. They eventually determined that it was caused by a design flaw that reduced the amount of light entering the instrument during one mode of operation.

The problem dated to 2004 and had never been caught in testing, says JPL’s David Crisp, the science team leader of the OCO-2 mission. “It was a stupid mistake. Embarrassing to the instrument designer and to me,” he says.

The team quickly developed a fix that involved tilting the spacecraft by 30 degrees to reorient light entering the instrument. Within three weeks they had tested and validated the solution, Crisp says, and OCO-2 is now operating as planned.

OCO-2 aims to measure atmospheric CO2 concentrations with enough precision to help pin down how human activities and natural systems are affecting emission and absorption of the greenhouse gas. It does so at much greater resolution than similar probes, such as Japan's Greenhouse Gases Observing Satellite (GOSAT), which launched in 2009.

The OCO-2 team is still evaluating its initial data and plans to release its first batch of CO2 measurements in March. But this week, the researchers distributed images showing the first few months of measurements.

The first global image of OCO-2 data reveals peak CO2 values over northern Australia, southern Africa and eastern Brazil. The OCO-2 team suggests that the high concentrations over Africa come from burning of savannas and forests. Elevated concentrations of CO2 over North America, Europe and China may be associated with human activities, such as burning of fossil fuels in power plants.

These and other human sources are pouring 40 billion tonnes of CO2 into the atmosphere each year, which has driven concentrations of the gas higher than they have been in millions of years. Only half of that CO2 stays in the atmosphere — the rest is absorbed by the oceans and vegetation. Researchers are keen to determine where the CO2 is going and whether natural systems are losing their capacity to absorb some of that pollution.

There are high hopes that information gleaned from the NASA mission can help answer some of those questions. For CO2 measurements, “OCO-2 is the sharpest eyes in the sky,” says Inez Fung, an atmospheric scientist at the University of California at Berkeley.