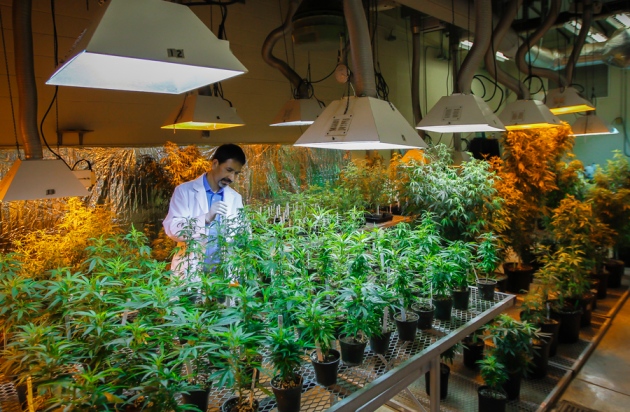 The University of Mississippi in Oxford grows marijuana for US researchers under a government contract.

Residents of 23 US states can buy medical marijuana to treat everything from cancer pain to anxiety, but US scientists must wade through onerous paperwork to score the drug for study. Their sole dealer is the National Institute on Drug Abuse (NIDA), which has a contract with the University of Mississippi in Oxford to produce marijuana for research purposes.

The agency has long faced complaints that its marijuana is too weak to represent what is sold on the street, and contains low levels of the non-psychedelic chemicals that show therapeutic promise for conditions such as epilepsy and chronic pain. Now, with legal marijuana increasingly available to the US public, NIDA is quietly changing course — working to expand the amount and variety of the drug available for study.

“We want to be able to evaluate the claims that marijuana is therapeutically beneficial” and to explore treatments for addiction, says Nora Volkow, director of NIDA in Rockville, Maryland.

In 2014, the institute increased its spending on research marijuana by 50%. Annual production at the University of Mississippi farm, where all the agency supplies are grown, soared from 18 to 600 kilograms, and the crop harvested late last year includes two new strains. One has low concentrations of tetrahydrocannabinol (THC), marijuana’s primary active ingredient, but high levels of cannabidiol, a non-hallucinogenic substance that seems to have therapeutic effects. The second has relatively balanced levels of the two chemicals.

Mahmoud ElSohly, who directs the University of Mississippi cultivation programme, says that the new strains will soon be ready to ship to researchers. But the farm’s improved offerings may not appease NIDA’s critics — including US states such as Colorado, which legalized recreational pot use in 2012. In December, the Colorado state government asked the federal government to allow state universities to grow marijuana for research, citing bureaucratic hurdles in obtaining products from NIDA and from private growers overseas.

And the agency’s most potent strains still fall short of the most powerful street pot. At least 90% of the marijuana seized by the US Drug Enforcement Administration (DEA) contains high levels of THC — often more than 20% by weight. NIDA’s pot contains 12% THC at most. “Let me just say: lame,” says Rick Doblin, director of the Multidisciplinary Association for Psychedelic Studies, a non-profit organization in Santa Cruz, California, that funds research into mind-altering drugs.

It is not clear how NIDA’s plants compare with those distributed by medical-marijuana dispensaries. Although legal under local state laws, such dispensaries are still illegal under federal law, so researchers cannot simply buy pot there to test. And because Congress voted last year to prohibit the federal government from raiding such facilities, the products are not available for NIDA to study, either. “I don’t know what dispensaries have,” says ElSohly. “I wish I did.”

The pool of US scientists who study marijuana is small, and to Volkow’s surprise, it has not grown despite the increasing availability of legal pot and NIDA’s efforts to ease limits on such research. Volkow suspects that scientists may simply need time to plan new experiments that involve marijuana, which must be evaluated by NIDA, the DEA and, in the case of clinical research, the Food and Drug Administration.

Donald Abrams, a physician at the University of California, San Francisco, who studies cannabinoids as cancer therapies, offers another theory. The rise of precision medical technologies such as gene therapy makes it less attractive to study a plant, he says — particularly one as controversial as marijuana.

“We want to be able to evaluate the claims that marijuana is therapeutically beneficial.”

Doblin suggests that successful therapies derived from marijuana are most likely to emerge outside the United States, in countries where licensed growers can provide the plant at relatively low cost and in high quantities. GW Pharmaceuticals in Salisbury, UK, uses marijuana from its private farm to produce Sativex (nabiximols), a multiple-sclerosis drug that is approved for use in 27 countries. And private growers in Israel and Canada produce research- and clinical-grade pot that is cheaper than NIDA’s crop. (The agency charges researchers US$1,525 per kilogram, or $7 per cigarette.)

NIDA says that it plans to limit its pot programme to individual researchers for the time being. But there is a nascent push in Congress to end the agency’s monopoly on research marijuana: bipartisan legislation introduced in the Senate on 10 March would allow at least three growers to obtain licences to cultivate pot for studies.

If the US government decides to expand legal marijuana production significantly, Canada could serve as a model. In April 2014, the Canadian government began allowing private firms to apply to grow medical marijuana; it has since awarded 16 licences. Canadian researchers who want to study marijuana or perform clinical trials obtain the drug by partnering with a grower. Because multiple companies hold licences, there is wide diversity in the strains available.

“The system that’s implemented right now will allow for really good collaborations,” says Joshua Eades, chief science officer of the medical-marijuana producer Tilray in Nanaimo, Canada. The company is working with researchers at the University of British Columbia Okanagan in Kelowna on an 40-person clinical trial of marijuana to treat post-traumatic stress disorder. Expected to start in early summer, it will be one of the largest-ever tests of marijuana for mental health.

With pot increasingly available to science outside the United States, Doblin says, “the NIDA monopoly is doomed.”