Scientists do not yet fully understand how the H7N9 avian influenza virus is spreading in China, or why the pattern of sporadic human cases looks like it does. But mapping the risks of known factors in the past geographical spread of avian flu viruses and human infections might provide some clues.

Most human cases of H7N9 remain concentrated around Shanghai on China's eastern seaboard, but cases have also been detected in Beijing in the north, and Henan province in the centre. (Size of red circles on the map is proportional to the number of human cases — hover the mouse over the circles to see number of cases for each.)

Sources: Multiple, including WHO and Xinhua News Agency.

The first known cases of human infection with H7N9 were reported in China on 31 March, with two cases in Shanghai on the eastern seaboard and one in the neighbouring province of Anhui. As of 22 April, the World Health Organization (WHO) has tallied 104 confirmed cases, including 21 deaths, and the virus has expanded its geographical range to neighbouring Jiangsu and Zhejiang provinces, as well as Beijing in the north and Henan in the centre of the country.

To stem the current surge of human cases, scientists must identify the sources of the virus, and the route by which it infects humans. Birds at live markets have been suspected as one source, but tens of thousands of tests in poultry and other animals elsewhere have so far failed to turn up significant levels of the virus.

It is far from easy to devise effective ways to sample birds and animals for testing in a country with some 6 billion domestic birds and 0.5 billion pigs — not to mention a vast population of wild birds, including many migratory species. Although the risk factors for the spread of H7N9 are not known, voluminous research on its cousin, the H5N1 virus that has caused 622 confirmed cases and 371 deaths since 2003, may help inform analyses. This, in turn, would help scientists and health officials to target their surveillance and control efforts.

For H5N1, researchers integrate large data sets that combine information on many potentially important factors, such as poultry trade routes, the numbers of birds being transported, the distribution of live-bird markets and their supply routes, waterfowl numbers, land use and human population densities. To these, they add the distribution of H5N1 cases in poultry, and as well as positive H5N1 results from active surveillance in markets.

Marius Gilbert, a co-author of one such study published in PLoS Pathogens in 20111, and an expert in the epidemiology and ecology of avian flu viruses at the Free University of Brussels, says that although the risk factors for H7N9 may be different, given the current dearth of information, H5N1 risk maps are probably a good starting point for identifying areas most at risk.

Indeed, when human cases of H7N9 are overlaid on a risk map that Marius and his co-authors supplied to Nature, they seem to fall within the highest risk areas for H5N1. The map suggests that high-risk areas for H7N9 might include Shandong province (which reported its first case on 23 April) and a belt extending around the Bohai Sea to Liaoning province in the north.

Gilbert was one of more than 30 international experts who gathered at the Food and Agriculture Organization of the United Nations in Rome for a two-day meeting last week to discuss the current H7N9 outbreaks. At that meeting, he says, risk modelling and mapping were discussed as one means to devise targeted surveillance. Such information could also be used to help to modify farming and trade practices to reduce the risk of human exposure to the virus. As more is learned about H7N9, such models can be further refined. 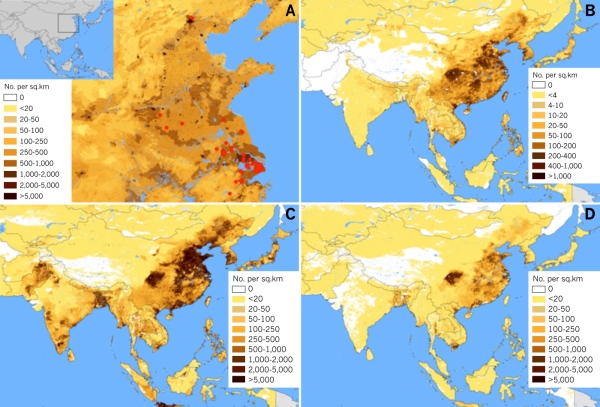 The H7N9 virus has mutations that mean that it spreads from birds to humans more easily than does H5N1. Proximity between bird and mammal populations could also give the virus opportunities for further adaptation to mammals, including humans. An international team of researchers compiled maps for Nature showing the population densities of chickens, pigs, ducks and humans in many parts of China and throughout Asia. They calculate that 131 million people, 241 million domestic chickens, 47 million domestic ducks and 22 million pigs live within a 50-kilometre radius of each of the 60 H7N9 human cases that had occurred up to 16 April.

There has been no evidence of sustained human-to-human spread of H7N9 so far. But what if it did happen? In what Jeremy Farrar, director of the Oxford University Clinical Research Unit in Ho Chi Minh City, Vietnam, describes as an "extraordinary effort", he and other international researchers, including some from China and the WHO, have worked together in the past weeks to rapidly analyse airline-passenger data for China. The resulting maps and data may give an idea of where the zones of immediate highest risk worldwide might be.

One map supplied to Nature by the researchers shows, they note, that eastern China — the epicentre of the current H7N9 outbreaks — is one of the world's busiest hubs for airline traffic. "A quarter of the global population outside of China lives within two hours of an airport with a direct flight from the outbreak regions, and 70% if a single connecting flight is included," the researchers explain.

As Peter Horby, director of the Oxford University Clinical Research Unit in Hanoi, Vietnam, and colleagues point out in a World View in Nature this week, "The first human case of H7N9 outside mainland China is perhaps only a matter of time. Then the public-health and clinical community will need to assess, carefully and quickly, whether it represents a single imported case of animal-to-human transmission, an animal epidemic that has spread abroad, or the international spread of a partially or fully human-adapted virus.”

Maps presented are for data-visualization purposes only; boundaries and names shown do not express any opinion on the legal status of any country, territory or the delimitation of territory boundaries.