No two stem cells are identical, even if they are genetic clones. This stunning diversity is revealed today in an enormous publicly available online catalogue of 3D stem cell images. The visuals were produced using deep learning analyses and cell lines altered with the gene-editing tool CRISPR. And soon the portal will allow researchers to predict variations in cell layouts that may foreshadow cancer and other diseases.

The Allen Cell Explorer, produced by the Allen Institute for Cell Science in Seattle, Washington, includes a growing library of more than 6,000 pictures of induced pluripotent stem cells (iPS) — key components of which glow thanks to fluorescent markers that highlight specific genes.

The Cell Explorer complements ongoing projects by several groups that chart the uniqueness of single cells at the level of DNA, RNA and proteins. Rick Horwitz, director of the Allen Institute for Cell Science, says that the institute’s images may hasten progress in stem cell research, cancer research and drug development by revealing unexpected aspects of cellular structure. “You can’t predict the outcome of a football game if you know stats on all the players but have never watched a game.”

The project began about a year ago with adult skin cells that had been reprogrammed into an embryonic-like, undifferentiated state. Horwitz and his team then used CRISPR–Cas9 to insert tags in genes to make structures within the cells glow. The genes included those that code for proteins that highlight actin filaments, which help cells to move and maintain their shape. It quickly became clear that the cells, which were all genetic clones from the same parent cell, varied in the placement, shape and number of their components, such as mitochondria and actin fibres.

Computer scientists analysed thousands of the images using deep learning programs and found relationships between the locations of cellular structures. They then used that information to predict where the structures might be when the program was given just a couple of clues, such as the position of the nucleus. The program ‘learned’ by comparing its predictions to actual cells.

The deep learning algorithms are similar to those that companies use to predict people’s preferences, Horwitz says. “If you buy a chainsaw at Amazon, it might then show you chain oil and plaid shirts.”

The 3D interactive tool based on this deep learning capability should go live later this year. At the moment, the site shows a preview of how it will work using side-by-side comparisons of predicted and actual images.

Benjamin Freedman, a cell biologist at the University of Washington in Seattle, looks forward to playing with the Cell Explorer’s predictive function once the Allen Institute team has taught their algorithm to recognize more iPS cells that have been changed genetically or chemically. For example, Freedman says he could delete a gene related to kidney disease in one of the fluorescently tagged stem cells from the Allen Institute and see how the mutation affects the glowing structure. Then he could use the site’s modelling tool to determine how other cellular components might be altered. “Ultimately,” Freedman says, “we want to understand processes at the cellular level that cause disease in the kidney as a whole.”

Filling in the holes

In the coming months, Allen Institute researchers will update the site with images of stem cells at different stages of cell division, and as they transform into distinct cell types, such as heart and kidney cells. Catching cells at different time points can be crucial to identifying fundamental processes, says Horwitz. 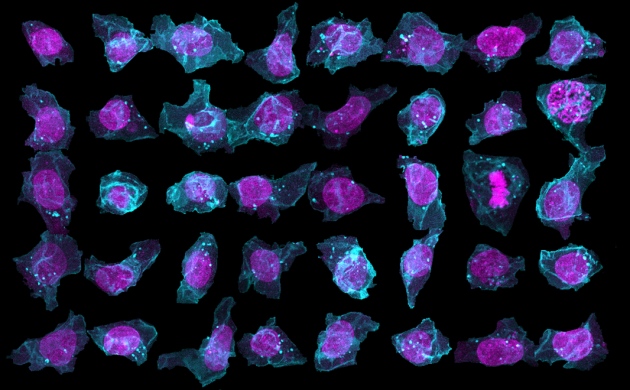 The Allen Institute’s visual emphasis on stem cells dovetails with a number of efforts to catalogue other aspects of cells. For example, the London-based charity Cancer Research UK is creating interactive virtual-reality models of breast cancer cells in tumours. And an international effort called the Human Cell Atlas seeks to define all human cell types in terms of their molecular profiles, including DNA sequences, RNA transcripts and proteins.

Aviv Regev, a computational biologist at the Broad Institute in Cambridge, Massachusetts, who is working on the Human Cell Atlas, says that the Allen Cell Explorer complements her project by focusing on the look of cellular features as opposed to how genes, RNA and proteins interact within the cell. “The community is accepting that there are a lot of differences between cells that we thought were the same until recently,” she says, “so now we’re taking an unbiased approach to learn about pieces in the puzzle we didn’t know existed before.”