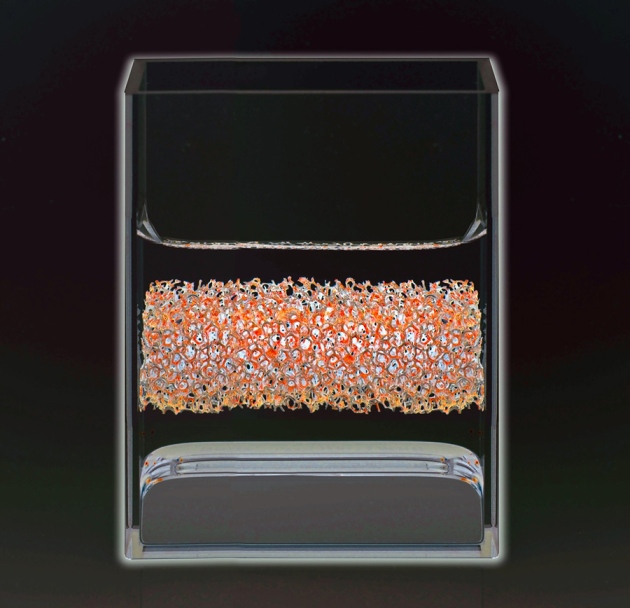 A room-temperature analogue of a molten-metal battery. The three liquids that constitute the positive electrode (bottom), the electrolyte (middle) and the negative electrode (top) stay separated like oil and vinegar.

A battery made of molten metals could help to make sources of renewable energy more viable by storing the excess electricity generated by these intermittent sources.

In a paper published on 21 September in Nature1, researchers describe how by replacing the magnesium in an earlier molten-metal battery with lead they obtained a device that runs at lower temperatures — which could make the technology more competitive for large-scale use on the electric grid.

Donald Sadoway, an electrochemist at the Massachusetts Institute of Technology in Cambridge, and his colleagues have been developing batteries in which the three main components — a negative electrode, a positive electrode and, between them, an electrolyte — are liquid. Most other battery types have solid electrodes and sometimes even a solid electrolyte.

In the team's latest model, the positive electrode is a molten alloy of lead and antimony; the negative electrode is liquid lithium; and the electrolyte between them is a molten mixture of lithium salts. The liquids are all stored in the same tank, where they stack up in layers “the way salad oil and vinegar would”, because they are immiscible and have different densities, says Sadoway.

When the battery discharges, lithium atoms in the negative electrode give up an electron and travel through the electrolyte to the lead–antimony electrode. Charging pushes them back in the opposite direction, and the flow of current is enough to keep the metals liquefied.

Hot off the press

In previous versions of the battery, the team had used a magnesium–antimony positive electrode2, but that alloy’s high melting point meant that the battery needed to operate at almost 700 °C. That ate up too much energy and increased the rate of corrosion of internal components.

Their lead-antimony-based cells instead could run at 450 °C. They also did well in tests of durability — a major issue for the batteries used in today's mobile gadgets — showing no sign of corrosion after 1,800 hours of operation, and maintaining 94% of their capacity after 450 complete charge–discharge cycles. Sadoway estimates that they would keep 85% of their charge capacity after a decade of daily cycling. “There’s no battery out there that can offer that level of performance,” he says.

Molten-metal batteries are “a very innovative idea”, says George Crabtree, director of the US Joint Center for Energy Storage Research (JCESR), based at the Argonne National Laboratory near Chicago, Illinois. The high operating temperatures of molten-metal batteries are a drawback, he says, but using lead to reduce the temperature is “a really important step forward”.

Sadoway estimates that a large-scale molten-metal unit might cost around US$500 per kilowatt-hour of electricity produced. That is a long way off the target of $100 per kilowatt-hour that the JCESR says the industry should aim for — a cost judged to be low enough for the technology to be adopted widely (see 'The rechargeable revolution: A better battery'). But liquid electrodes do not degrade, and there are no moving parts, so Sadoway thinks that maintenance costs would be very low. “The total cost of ownership is the key point,” he says.

Others are not convinced. “Will this actually see deployment for grid-energy storage? I don’t think so,” says Jeff Dahn, a battery researcher at Dalhousie University in Halifax, Canada. Bleeding off energy to keep the metals liquid inevitably lowers the efficiency of the battery, he says, pointing out that 2% of the stored charge is wasted during each discharge. “That’s very poor,” he says.

Dahn and others think that the future lies in lithium-ion batteries, the type currently used in laptops and mobile phones. Lithium-ion batteries can cost more than US$1,000 per kilowatt-hour of capacity and accumulate damage in their electrodes with every recharge. But Dahn and others say that future improvements will make them more competitive, as will economies of scale. Construction is set to begin next year on a $5-billion battery factory in Nevada that could bring costs down to $250 per kilowatt-hour, he says.

Meanwhile, Sadoway's team is continuing to refine its battery’s chemistry. Sadoway says that he already has an alternative design — as-yet unpublished — that offers even lower operating temperatures and a longer lifetime.