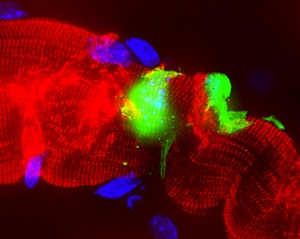 Leprosy bacteria can reprogram cells to revert to a stem-cell-like state, able to mature into different cell types, researchers report today in Cell1.

The scientists stumbled on the discovery while researching the way leprosy spreads around the body. The mechanism of the hijacking is unclear, but reproducing it could lead to new stem-cell-based therapeutic strategies.

The initial target of the leprosy bacterium — Mycobacterium leprae — is Schwann cells, which are part of the peripheral nervous system. Like rubber around an electric wire, the cells wrap around nerves to insulate the electric signals passing through.

The researchers isolated Schwann cells from mice and infected them with M. leprae. The bacteria reprogrammed the cells into a stem-like state, turning off genes associated with mature Schwann cells and turning on embryonic or developmental ones.

The bacteria appeared to trigger Schwann cells' plasticity, the ability to revert to an immature state and turn into new types of cells. (Healthy Schwann cells do so to help nerves recover and regenerate after an injury.)

“This is a very sophisticated mechanism — it seems that the bacterium knows the mechanistic interaction of the Schwann cell better than we do,” says Anura Rambukkana, a regeneration biologist at the University of Edinburgh, UK, who led the study.

Once reprogrammed, the stem cells are able to migrate to different body areas, and the bacteria ride along. When the infected cells reach another tissue, such as skeletal muscle, they integrate with that tissue's cells, spreading the bacteria. The infected stem cells were also found to attract immune cells by secreting proteins called chemokines — allowing the bacteria to hitch a ride on these cells as well.

The researchers do not know what triggers the reprogramming event, but they suspect that the mechanism could exist in other infectious diseases.

“Cellular plasticity may represent an underlying mechanism of disease, as other cellular reprogramming events have been shown in cancers and metabolic diseases,” says Sheng Ding, a stem-cell biologist at the Gladstone Institute of Cardiovascular Disease in San Francisco, California.

A greater understanding of these precise mechanisms could improve treatment and earlier diagnosis of leprosy itself. Before this experiment, scientists did not know how the bacteria spread through the body. The latest findings could provide clues about how to catch the disease before it does so.

In the future, bacteria could be used to change adult tissue cells into stem cells in the laboratory, potentially leading to new regenerative treatments for diseases such as diabetes and Alzheimer’s.