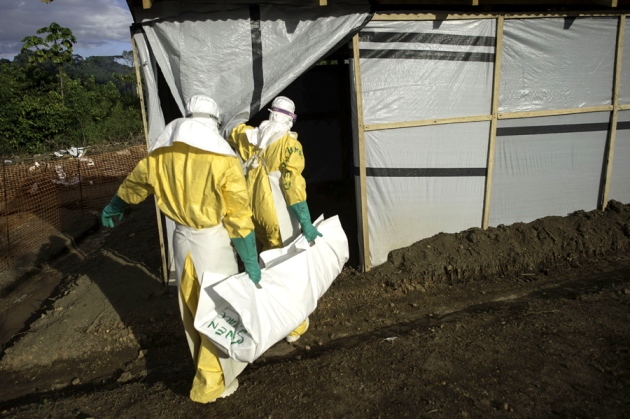 Health-care workers at an Ebola treatment centre in Sierra Leone.

Deadly Ebola probably touched down in Lagos, Nigeria, the largest city in Africa, on 20 July. A man who was thought to be infected with the virus had arrived there on a flight from Liberia, where, along with Guinea and Sierra Leone, the largest recorded Ebola outbreak is currently raging. The Lagos case is the first to be internationally exported by air travel and today the UK foreign secretary announced that he would chair a government meeting on Ebola.

As long as the virus continues to infect people in Liberia, Guinea and Sierra Leone, there is a small risk of more long-distance exports of the disease. But, as Nature’s Declan Butler explains, Ebola does not pose a global threat.

Is it worrying that the virus reached the largest city of the most populous African country?

The World Health Organization still considers the Lagos case a “probable” infection because it has not yet confirmed that the 40-year-old Liberian man had Ebola. He was quarantined upon arrival at the airport and taken to hospital, where he died on 25 July. Assuming he had Ebola, if proper control measures were taken at the airport and at the hospital, the risk that health-care workers or others will become infected as a result of contact with him is low. The European Centre for Disease Prevention and Control classifies people sharing public transport with someone infected as having a “very low” risk of catching the virus. Healthcare workers and doctors, several of whom have now been infected and died as a result of caring for people in the current outbreak, are at much higher risk and the WHO advises that they take strict precautions, which greatly lowers the risk.

What about the risk of air travellers exporting the virus to other cities?

The ECDC also says the probability of an infected person getting on a flight in the first place is low, given the small overall number of Ebola cases. Moreover, functional health systems should be able to prevent onward spread from any exported cases. Overall, the World Health Organisation estimates that there is a high risk of spread to countries bordering those with existing outbreaks, a moderate risk to countries further afield in the sub-region, but that there is little chance of spread overseas. There is no reason to assume that an exported case — be it to Lagos, a city of 17 million people, or any other place — will spark new outbreaks, because Ebola is not highly contagious.

Wait, Ebola is hard to catch?

Though the strain of Ebola in the current outbreak appears to kill 56% of the people it infects, to become infected in the first place, a person's mucous membranes, or an area of broken skin, must come into contact with the bodily fluids of an infected person, such as blood, urine, saliva, semen or stools, or materials contaminated with these fluids such as soiled clothing or bed linen. By contrast, respiratory pathogens such as those that cause the common cold or flu are coughed and sneezed into the air and can be contracted just by breathing or touching contaminated surfaces, such as door knobs. A pandemic flu virus can spread around the world in days or weeks and may be unstoppable whereas Ebola only causes sporadic localised outbreaks that can usually be stamped out.

So why is the outbreak continuing in Guinea, Sierra Leone and Liberia?

In principle, it should be straightforward to bring an Ebola outbreak under control via public health measures alone, namely, identifying all people who have been infected and isolating them, monitoring all those that they have been in contact with for 21 days (the maximum incubation period), as well as promoting basic infection control measures. What's more, since people infected with Ebola do not infect others until they have symptoms, it is easier to trace their contacts than it is for some other diseases. Ebola is out of control in these countries because the sheer size of the outbreak is stretching response teams, and also because of local sociocultural factors.

What kind of sociocultural factors?

Local health authorities and international organisations such as WHO and Médecins Sans Frontières (also known as Doctors Without Borders) are struggling to control the spread in these areas because of a lack of trust and cooperation among the affected populations. Doctors and health workers have sometimes been blocked from accessing affected places because of opposition from villagers who fear the medics will bring the disease. According to the WHO, not all people who are infected are getting or seeking care, and so are passing the virus on to family and other close contacts. Another major driver of new infections is that families are often continuing to perform traditional burial rites that involve mourners having direct contact with the bodies of the dead – and unfortunately all too often Ebola.

Is the size of the outbreak unusual?

It is larger than any other outbreak in recorded history. The WHO reports that as of 23 July, there were 814 lab-confirmed infections, including 456 deaths. If ‘probable’ and ‘suspected’ cases are included, these numbers rise to 1,201 infections, including 672 deaths — but some of these may have been caused by other diseases. Only 7 other of the few dozen past outbreaks have involved more than 100 cases, and before now, the largest outbreak was in Uganda between 2000 and 2001, in which 425 people were infected and 224 died.

Since Ebola first appeared in 1976, only 19 outbreaks have had more than 10 victims, and around 2,000 people in total have died from the disease. By comparison, malaria kills some 3,200 people a day, and diarrhoeal diseases some 4,000. Snakes and other venomous animals cause some 55,000 deaths a year — 27 times more than the entire number of people killed by Ebola in 38 years.

Are there any drugs or vaccines for Ebola?

There are no licensed drugs or vaccines for Ebola, although candidates are in development. New treatments would help reduce the high mortality rate of the disease – which has ranged in past outbreaks from 25% to 89%, with an average of around 62%. Jeremy Farrar, head of the UK Wellcome Trust in London, has argued for the use of experimental, unapproved drugs in the current outbreak. But other scientists have said that with distrust of health workers already hampering efforts to bring the outbreak under control, such measures could be counterproductive by creating suspicion and so further undermining trust.

What needs to be done to bring the outbreak under control?

Outreach, in particular involving local community leaders, will be vital to persuade people to trust health workers and to follow public-health advice. Authorities need to win over public trust, persuade people to bury their dead safely, and continue to step up local and regional efforts to trace and isolate people who are infected and their contacts.