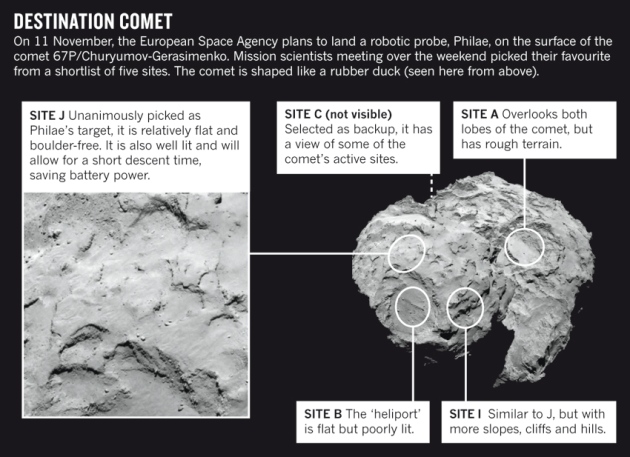 There is no easy way to alight on a 4-kilometre-long, rubber-duck-shaped ice ball that is spinning as it flies through the outer Solar System. But scientists working on the European Space Agency’s Rosetta mission have selected a spot on the ‘head’ of the comet, called 67P/Churyumov-Gerasimenko, that they think will give them the best chance for gently landing Philae, a washing-machine-sized robotic probe.

Planned for 11 November, the first soft landing ever attempted on a comet is fraught with risk. When researchers still thought that the object had a regular, potato-like shape, they estimated the landing’s chance of success at 70–75%. Now that the Rosetta orbiter has taken a closer look and revealed the curious shape, the odds are lower. Mark McCaughrean, a senior science adviser at the European Space Agency (ESA) directorate of science and robotic exploration in Noordwijk, the Netherlands, puts them at roughly “fifty–fifty”.

The mission scientists were unanimous in their choice of landing spot — a 1-square-kilometre patch known as site J — from a shortlist of five (see ‘Destination comet’). Philae lead scientist Jean-Pierre Bibring of the University of Paris-South in Orsay says that site J emerged as the favourite after the first day of a meeting held on the weekend of 13–14 September at the French National Centre for Space Studies in Toulouse. “This site is not the best for every one of the technical and scientific criteria, but overall it’s by far the best for mission success,” he says.

In a precisely choreographed fly-by, Rosetta will release Philae from a distance of about 10 kilometres. From there, the probe will drift unguided towards the target, where it will secure itself with harpoons and screws and start work. The information that Philae collects about the comet’s innards will help to calibrate data gathered by the more powerful instruments on Rosetta, says McCaughrean. “There are many things that we can only do on the surface,” he says.

A major advantage of site J is that the drop from Rosetta will be relatively short, at just 7 hours. That means that Philae will have more battery power to run its instruments after landing, because it will take two days to recharge using its solar panels.

The region also has relatively few boulders that could capsize Philae on landing. Still, nowhere is devoid of danger. “There is no one big Heathrow airport on the surface where you can say, ‘No problem’,” says McCaughrean.

Although chosen mainly for technical considerations, the site is also interesting scientifically. It is just a few hundred metres from two pits that scientists think will become more active, spewing out gas and dust,as the comet moves closer to the Sun and heats up. The position of the landing relative to Rosetta’s orbit will also afford the best chance of transmitting radio waves between the two craft to map the comet’s interior, says Bibring.

The mission team says that it reached its decision quickly, then spent most of the meeting’s second day picking a backup — a spot on the comet’s body known as site C.

Other potential backups included a crater nicknamed ‘the heliport’ for its flatness, but the site is not as well lit as site C. And a spot that would have provided views of the body, head and highly active ‘neck’ region had been effectively ruled out before the meeting even started, says Bibring, because Rosetta would have needed to drop to an orbit that was dangerously close to the comet.

The Rosetta team is rushing to gather as much data as possible and to stick to the November landing date, because after that increased comet activity could damage the orbiter.

Rosetta has been chasing its quarry for a decade. After waking from hibernation in January, it arrived at its destination in August and has been charting its target from ever-shrinking orbits ever since. Rosetta will continue to follow the comet as it journeys around the Sun.