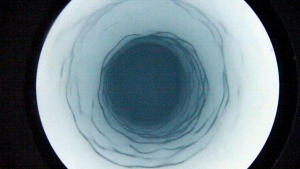 Drillers found a microbial ecosystem hiding under 800 metres of ice, at the end of this 50-centimetre-wide borehole in the Antarctic ice sheet.

Having just completed the tortuous 48-hour journey from the South Pole to the US west coast, John Priscu is suffering from more than his fair share of jet lag. But his tiredness can't mask the excitement in his voice. After weeks of intense field work in Antarctica, he and his team have become the first to find life in a lake trapped under the frozen continent's ice sheet.

“Lake Whillans definitely harbours life,” he says. “It appears that there lies a large wetland ecosystem under Antarctica’s ice sheet, with an active microbiology.”

The lake in question is a 60-square-kilometre body of water that sits on the edge of the Ross Ice shelf in West Antarctica. To reach it, Priscu, a glaciologist at Montana State University in Bozeman, and his team had to drill down 800 metres of ice.

They arrived at their goal on 28 January, when their environmentally clean hot-water drill broke through to the lake's surface. What they found was a body of water just 2 metres or so deep — much shallower than the 10–25 metres seismic surveys had suggested, although Priscu notes that the lake may well have deeper spots.

The team put a camera down the borehole to make sure that the borehole was wide enough for sampling instruments to be deployed and returned safely. It was, and over the next few days, the scientists collected some 30 litres of liquid lake water and eight sediment cores from the lake’s bottom, each 60 centimetres long.

What precious stuff they had retrieved soon became clear under the on-site microscope. Both water and sediment contained an array of microbes that did not need sunlight to survive. The scientists counted about 1,000 bacteria per millilitre of lake water — roughly one-tenth the abundance of microbes in the oceans. In Petri dishes, the bacteria show a “really good growth rate”, says Priscu.

“These are wonderful findings, a major discovery indeed,” says Martin Siegert, an Antarctic researcher at the University of Bristol, UK, who led a UK expedition to Lake Ellsworth, another subglacial body of water on the continent, in December. Unfortunately, technical difficulties halted the UK team’s drilling effort.

The exact nature of the life unearthed by the US team will now be established by DNA sequencing and other tests. It will take at least a month to do the basic work, says Priscu.

“What we are all dying to find out now is, of course, ‘who’s there’ and ‘what’s their life style',” he says.

Researchers hope that the survival strategies of the subglacial microbes might offer clues to what the biology of extraterrestrial life might be like — Jupiter’s moon Europa, for instance, is thought to host a large sub-surface ocean of water where such life might be able to exist.

As photosynthesis is impossible without sunlight, the Lake Whillans bacteria must get their energy from a different source. This could be existing organic material, or, like the ‘chemotrophs’ found in gold mines and near deep-sea hydrothermal vents, the bacteria might run on chemical reactions involving minerals in the Antarctic bedrock and carbon dioxide dissolved in lake water.

“We have been allowed a glimpse into Antarctica’s subglacial world,” Priscu says. “I’m sure our results will change the way we view that continent.”