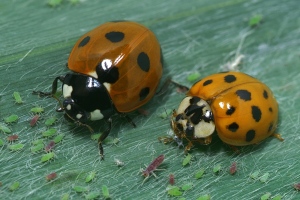 The Asian ladybird (right), an invasive species in western countries, carries a single-cell parasite that causes it no harm but is deadly to its ecological competitor, the native seven-spot ladybird (left).

Ladybirds around the world are in danger from an invader that inadvertently wipes out its competitors using a biological weapon.

The interloper is the harlequin ladybird (Harmonia axyridis), one of the world’s most invasive insects. From its homelands in central Asia, H. axyridis was introduced to Europe and North America to control aphids. Since then, however, it has become a serious pest that has put native ladybird species under threat by outcompeting or even eating them.

Entomologist Andreas Vilcinskas of Justus-Liebig-University in Giessen, Germany, suggests that the harlequin’s success partly hinges on the presence of a single-celled parasite that he and his colleagues found living inside the ladybirds. The parasite does no harm to the harlequin, but if it infects other ladybird species, such as the native seven-spot ladybird (Coccinella septempunctata), it invariably kills them.

“The situation is similar to when Europeans conquered the New World,” says Vilcinskas. “The diseases they carried, such as smallpox, killed more native people than their weapons.” Vilcinskas and his team publish their results today in Science1.

Some scientists had previously thought that the harlequin owed its success to harmonine, a toxic antibacterial chemical found in its blood (or haemolymph). Harmonine allows the harlequin to resist certain diseases and to poison native ladybirds that eat its eggs. However, Vilcinskas and his team found that high concentrations of harmonine do not kill seven-spot ladybirds — but a dose of the harlequin’s haemolymph does.

When Vilcinskas and his colleagues looked at the harlequin's haemolymph under a microscope, they found the culprit: a microsporidian parasite. These exist in the eggs and larvae of all harlequin ladybirds, but in a dormant and apparently harmless state. “I have worked on insect immunity for 20 years, and I had never [before] seen a haemolymph sample that was full of microsporidians that do not harm the carrier,” says Vilcinskas.

Other ladybirds are not so lucky. When the team injected the microsporidians into seven-spot species in the lab, the beetles all died within two weeks. Ladybirds often eat each other’s eggs and larvae, so by consuming invading harlequins, native species could contract the fatal parasitic infection in the wild.

“Parasitic microsporidians arriving with imported hosts have also been suspected as contributors to the decline of some North American bumblebees,” says Nancy Moran, an evolutionary biologist at Yale University in New Haven, Connecticut. “It will be interesting to see how general this phenomenon might be.”

But Helen Roy, an entomologist at the Centre for Ecology & Hydrology in Wallingford, UK, and leader of the UK Ladybird Survey, says that there could be other reasons for the harlequin’s success. For example, it is highly resistant to a fungal disease that kills native species. She also says that it is rare for seven-spot ladybirds to eat harlequin eggs in the wild.

This might explain why the seven-spot species is handling the harlequin invasion better than most other European ladybirds, says Lori Lawson Handley, an invasive-species biologist at the University of Hull, UK. “It remains to be seen whether the microsporidian has found its way into wild C. septempunctata populations, and whether transfer to other native species has contributed to their decline,” she says.

Handley also suggests that parasitic wasps, which lay their eggs in harlequins and other ladybirds, could be helping to spread the microsporidian parasite between species. “This could be a more important route of transfer than predation,” she says.