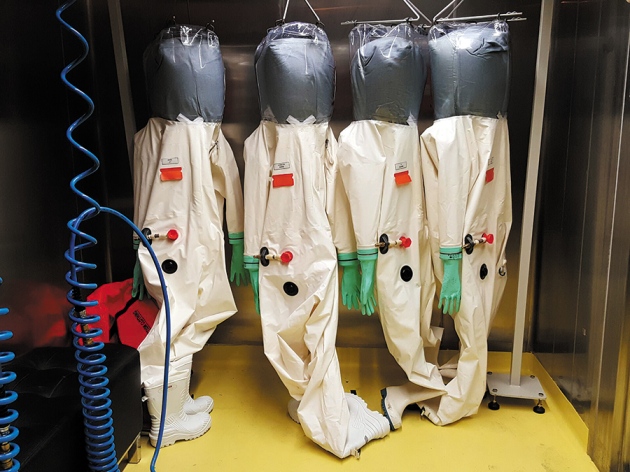 Hazard suits hang at the National Bio-safety Laboratory, Wuhan, the first lab on the Chinese mainland equipped for the highest level of biocontainment.

A laboratory in Wuhan is on the cusp of being cleared to work with the world’s most dangerous pathogens. The move is part of a plan to build between five and seven biosafety level-4 (BSL-4) labs across the Chinese mainland by 2025, and has generated much excitement, as well as some concerns.

Some scientists outside China worry about pathogens escaping, and the addition of a biological dimension to geopolitical tensions between China and other nations. But Chinese microbiologists are celebrating their entrance to the elite cadre empowered to wrestle with the world’s greatest biological threats.

“It will offer more opportunities for Chinese researchers, and our contribution on the BSL‑4-level pathogens will benefit the world,” says George Gao, director of the Chinese Academy of Sciences Key Laboratory of Pathogenic Microbiology and Immunology in Beijing. There are already two BSL-4 labs in Taiwan, but the National Bio-safety Laboratory, Wuhan, would be the first on the Chinese mainland.

The lab was certified as meeting the standards and criteria of BSL-4 by the China National Accreditation Service for Conformity Assessment (CNAS) in January. The CNAS examined the lab’s infrastructure, equipment and management, says a CNAS representative, paving the way for the Ministry of Health to give its approval. A representative from the ministry says it will move slowly and cautiously; if the assessment goes smoothly, it could approve the laboratory by the end of June.

BSL-4 is the highest level of biocontainment: its criteria include filtering air and treating water and waste before they leave the laboratory, and stipulating that researchers change clothes and shower before and after using lab facilities. Such labs are often controversial. The first BSL-4 lab in Japan was built in 1981, but operated with lower-risk pathogens until 2015, when safety concerns were finally overcome.

The expansion of BSL-4-lab networks in the United States and Europe over the past 15 years — with more than a dozen now in operation or under construction in each region — also met with resistance, including questions about the need for so many facilities.

The Wuhan lab cost 300 million yuan (US$44 million), and to allay safety concerns it was built far above the flood plain and with the capacity to withstand a magnitude-7 earthquake, although the area has no history of strong earthquakes. It will focus on the control of emerging diseases, store purified viruses and act as a World Health Organization ‘reference laboratory’ linked to similar labs around the world. “It will be a key node in the global biosafety-lab network,” says lab director Yuan Zhiming.

The Chinese Academy of Sciences approved the construction of a BSL-4 laboratory in 2003, and the epidemic of SARS (severe acute respiratory syndrome) around the same time lent the project momentum. The lab was designed and constructed with French assistance as part of a 2004 cooperative agreement on the prevention and control of emerging infectious diseases. But the complexity of the project, China’s lack of experience, difficulty in maintaining funding and long government approval procedures meant that construction wasn’t finished until the end of 2014.

The lab’s first project will be to study the BSL-3 pathogen that causes Crimean–Congo haemorrhagic fever: a deadly tick-borne virus that affects livestock across the world, including in northwest China, and that can jump to people.

Future plans include studying the pathogen that causes SARS, which also doesn’t require a BSL-4 lab, before moving on to Ebola and the West African Lassa virus, which do. Some one million Chinese people work in Africa; the country needs to be ready for any eventuality, says Yuan. “Viruses don’t know borders.”

Gao travelled to Sierra Leone during the recent Ebola outbreak, allowing his team to report the speed with which the virus mutated into new strains1. The Wuhan lab will give his group a chance to study how such viruses cause disease, and to develop treatments based on antibodies and small molecules, he says. 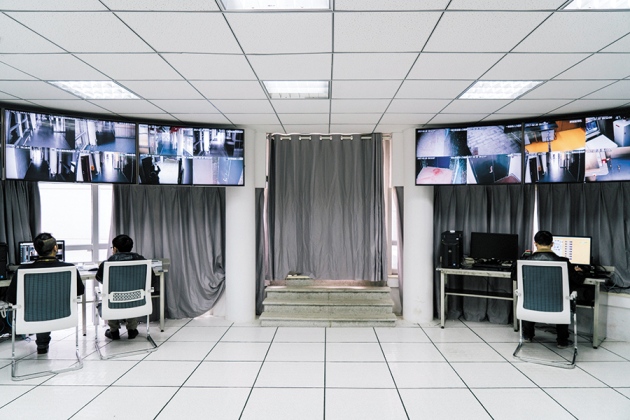 The opportunities for international collaboration, meanwhile, will aid the genetic analysis and epidemiology of emergent diseases. “The world is facing more new emerging viruses, and we need more contribution from China,” says Gao. In particular, the emergence of zoonotic viruses — those that jump to humans from animals, such as SARS or Ebola — is a concern, says Bruno Lina, director of the VirPath virology lab in Lyon, France.

Many staff from the Wuhan lab have been training at a BSL-4 lab in Lyon, which some scientists find reassuring. And the facility has already carried out a test-run using a low-risk virus.

But worries surround the Chinese lab, too. The SARS virus has escaped from high-level containment facilities in Beijing multiple times, notes Richard Ebright, a molecular biologist at Rutgers University in Piscataway, New Jersey. Tim Trevan, founder of CHROME Biosafety and Biosecurity Consulting in Damascus, Maryland, says that an open culture is important to keeping BSL-4 labs safe, and he questions how easy this will be in China, where society emphasizes hierarchy. “Diversity of viewpoint, flat structures where everyone feels free to speak up and openness of information are important,” he says.

Yuan says that he has worked to address this issue with staff. “We tell them the most important thing is that they report what they have or haven’t done,” he says. And the lab’s inter­national collaborations will increase openness. “Transparency is the basis of the lab,” he adds.

The plan to expand into a network heightens such concerns. One BSL-4 lab in Harbin is already awaiting accreditation; the next two are expected to be in Beijing and Kunming, the latter focused on using monkey models to study disease.

Lina says that China’s size justifies this scale, and that the opportunity to combine BSL-4 research with an abundance of research monkeys — Chinese researchers face less red tape than those in the West when it comes to research on primates — could be powerful. “If you want to test vaccines or antivirals, you need a non-human primate model,” says Lina.

But Ebright is not convinced of the need for more than one BSL-4 lab in mainland China. He suspects that the expansion there is a reaction to the networks in the United States and Europe, which he says are also unwarranted. He adds that governments will assume that such excess capacity is for the potential development of bioweapons.

“These facilities are inherently dual use,” he says. The prospect of ramping up opportunities to inject monkeys with pathogens also worries, rather than excites, him: “They can run, they can scratch, they can bite.”

Trevan says China’s investment in a BSL-4 lab may, above all, be a way to prove to the world that the nation is competitive. “It is a big status symbol in biology,” he says, “whether it’s a need or not.”

The name of the CNAS representative has been removed from this article on request.