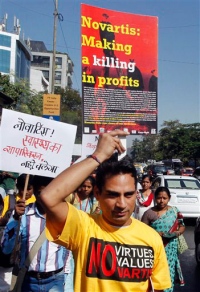 Novartis says that the Indian court ruling will stifle the country's access to new medicines, but public-health activists say it will protect the poor's access to life-saving care.

The court rejected the Basel-based company’s challenge to India’s patent law, which limits drug firms’ ability to extend patent life beyond 20 years by making minor modifications to drugs, a tactic known as ‘evergreening’. Novartis's patent claim on a modified version of Gleevec (marketed in some countries as Glivec) “fails in both the tests of invention and patentability”, the court said.

The country — whose support of cheap generics has reduced drug prices, notably of medicines for HIV, within its borders and in other developing nations — sees its law as promoting public health. But drug companies complain that the law weakens intellectual-property rights and stifles innovation.

The battle over Gleevec began in 2006, when the Indian patent office in Chennai rejected Novartis’s application for a variant of the drug that the company patented in the United States and other developed countries in 1993, citing the patent law’s clause 3(d).

Novartis challenged the ruling in a Chennai senior court, saying that it violated World Trade Organization (WTO) rules on intellectual property that India had adopted — but the court rejected the challenge in 2007. The company appealed to the Supreme Court in 2009, which set the stage for today’s ruling.

“I don’t see how it (the decision) could have come out any other way,” said Shamnad Basheer, an intellectual-property expert at the National University of Juridical Sciences in Kolkata. “For the court to have lowered the section-3(d) standard and permitted patents for mere minor modifications… without additional benefits to the patient would have made a mockery of section 3(d).”

German Velasquez, a special adviser for health and development at South Centre, a think tank based in Geneva, Switzerland, says he hopes that “many developing countries will follow India’s example to protect the rights of their populations to have access to essential medicines”. A 2011 study by South Centre found evidence of “a significant proliferation of patents on developments of incremental nature” in Argentina, Brazil, Colombia, India and South Africa1.

But Paul Herrling, chairman of the Novartis Institute of Tropical Diseases in Singapore, says that the decision will make the Indian market less attractive for drug companies. “Innovative pharmaceutical companies will not be encouraged to bring their innovations to India, because cheaper copies will be made quickly in the country,” he told Nature. “India will also not be our first choice as an innovation research centre, as long as India gives innovations significantly less protection than most of the rest of the world.”

That could affect drug development beyond India’s borders as well, says Tenu Avafia, a senior policy adviser for the United Nations Development Programme's HIV Health and Development Practice in New York. The verdict “re-affirms the right of WTO members to implement their patent legislation to meet public-health objectives”, he says. “The implications of the Supreme Court’s decision will be felt across the globe, because the Indian pharmaceutical industry supplies so many low- and middle-income countries with affordable medicines.”