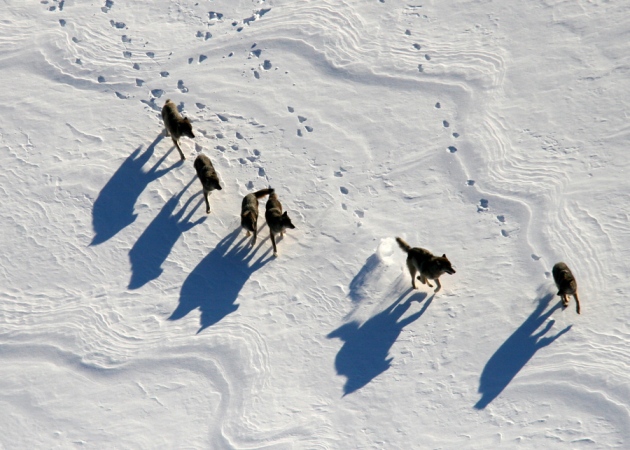 Wolves on Isle Royale in Lake Superior are suffering from spine problems as a result of inbreeding.

Since 1958, ecologists have watched wolf and moose populations on Isle Royale in Lake Superior wax and wane in response to each other, disease and the weather. But for the longest predator–prey study in the world, the wolf is now at the door. Devastated by inbreeding, the wolf population has dropped from 30 individuals a decade ago to just 10 spotted in field counts so far this year, leading the US National Park Service to consider importing new animals for a ‘genetic rescue’.

Now, nature is intervening — and could either save the landmark project without the need for tranquillizer darts and wolf crates, or sound its death knell. As temperatures plummeted last month, Lake Superior froze for the first time in six years. The 24-kilometre ice bridge could let wolves from the Canadian mainland cross to the US island, bringing an influx of genes (see ‘Wolf island’). But project scientists say that the opposite is more likely: free to roam, the last wolves could leave the island in search of mates. 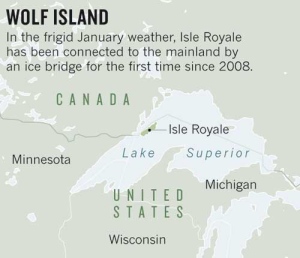 That would put an end to a study that has provided textbook ecology lessons for generations. It has shown how predation can structure populations of prey: when wolf numbers plummet, moose populations tend to soar (see ‘Ecosystem in flux’). And it has offered insights into wolf behaviour, moose physiology, the life cycle of moose ticks and how wolves might be driven to form packs to ward off scavengers such as ravens, rather than for any hunting advantage.

Through the decades, the search for cause and effect in the ecosystem has been rendered much easier by isolation from the mainland’s human and animal populations. Occasionally, however, Lake Superior freezes. The very first wolves came to Isle Royale over an ice bridge in the early 1940s, some 30 years after the first moose. The lake froze nearly every year at the beginning of the study, but that has changed. The most recent ice bridge was in 2008; before that, the last one was in 1997, when a wolf that biologists called ‘the old grey guy’ came to the island. He sired 34 pups and provided a rare boost of genes that doubled the population by the mid-2000s.

Whether any wolves have crossed this year’s ice bridge will not be clear immediately. The scientists are conducting their annual population survey, and are flying along the island shore in their Super Cub plane two or three times a week, but snow fills wolf tracks very quickly. If new wolves do arrive, their presence will probably be confirmed in the coming months, when DNA is extracted from faeces samples. 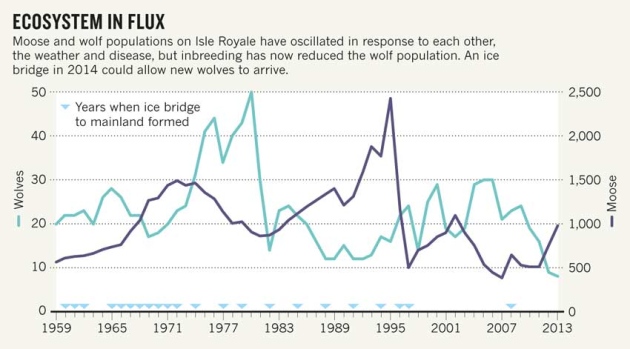 John Vucetich, co-leader of the project and an ecologist at Michigan Technological University in Houghton, says that the need for an influx of genes is becoming urgent. In the past two decades, wolf skeletons have displayed spinal deformities that can painfully pinch nerves and affect gait and generally reduce fitness. According to work led by Vucetich and Rolf Peterson, also an ecologist at Michigan Technological University, this might explain why the number of moose needed to support a given number of wolves has increased: the predators’ attacking efficiency may be compromised (J. Räikkönen et al. Biol. Conserv. 142, 1025–1031; 2009).

For Vucetich, genetic rescue is required not so much to maintain the continuity of the study as to preserve the ecosystem. Moose eat balsam fir trees. When the moose population expands, unchecked by predation, fewer fir seedlings can grow large enough to ‘escape’ into the canopy above the reach of moose and reproduce. There is already a missing generation of trees from between about 1910, when the moose arrived on the island, and 1940, when the wolves came. Most of Isle Royale’s balsam firs are thus either older than 100 years and near the end of their lives, or young and short enough to be browsed to death. If the trees do not achieve escape in the next decade or so, says Vucetich, “large portions of Isle Royale are not going to generate balsam fir, which is a really basic component of a boreal forest ecosystem”.

“A genetic rescue could set a precedent for intervention in other parks.”

Many scientists familiar with Isle Royale support genetic rescue, especially because human activity has contributed to the current population crash. Climate change has led to the decreasing frequency of ice bridges. Canine parvovirus, probably caught from a domestic dog, caused the wolf population to fall from around 50 to 14 in the early 1980s. And in 2012, three wolves were found dead in an abandoned mining pit. Given this history of human influence, the argument that leaving the wolves alone would be allowing nature to take its course does not sway most ecologists.

David Mech, a US Geological Survey wolf biologist based in St Paul, Minnesota, argues in favour of “watchful waiting”. He says that much can be learned from studying how inbreeding affects population persistence, and that the knowledge would be useful for conservation biologists, who often need to nurture small, inbred populations of endangered species. He is not convinced that the wolves will die out; they have hit low numbers before and bounced back, he notes. And even if they do disappear, new wolves can be brought in quickly.

But Vucetich says that it could be five years before the last wolf dies and scientists confirm its demise, and another five before federal bureaucracies approve a genetic rescue and a pack develops into a predation force. He fears that a decade without significant moose predation would leave the fir trees devastated.

Phyllis Green, superintendent of the Isle Royale National Park, is considering three alternatives: doing nothing; watchful waiting followed by reintroduction if the population hits zero; or genetic rescue. She has not initiated a formal decision-making process, and will not commit to a timeline, but says that she wants to make a decision in consultation with her regional and national directors “before we run out of options”.

She is proceeding cautiously, she says, in part because of the implications of her decision. The mandate of the National Parks Service, as enshrined in a 1916 Act of Congress, is to “conserve the scenery and the natural and historic objects and the wild life therein and to provide for the enjoyment of the same in such manner and by such means as will leave them unimpaired for the enjoyment of future generations”. Generally, this has meant a hands-off approach, but a genetic rescue could set a precedent for interventions to counteract the effects of climate change in other parks.

Green knows that many scientists are in favour of genetic rescue, but she also hears from “wilderness-oriented” advocates who urge her not to intervene. “It is one of the wicked problems,” she says.