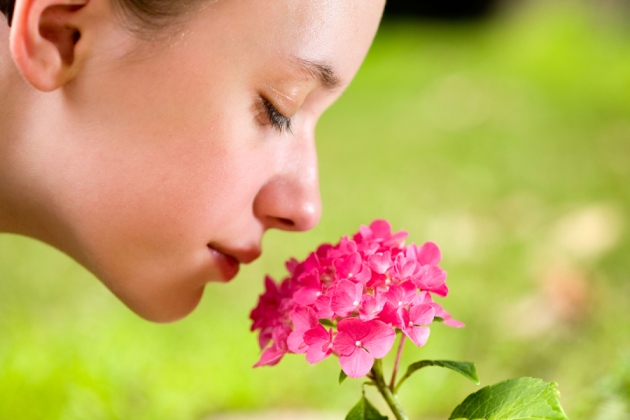 The human nose has roughly 400 types of scent receptors that can detect at least 1 trillion different odours.

The human nose can distinguish at least 1 trillion different odours, a resolution orders of magnitude beyond the previous estimate of just 10,000 scents, researchers report today in Science1.

Scientists who study smell have suspected a higher number for some time, but few studies have attempted to explore the limits of the human nose’s sensory capacity. “It has just been sitting there for somebody to do,” says study co-author Andreas Keller, an olfactory researcher at the Rockefeller University in New York.

To investigate the limits of humans' sense of smell, Keller and his colleagues prepared scent mixtures with 10, 20 or 30 components selected from a collection of 128 odorous molecules. Then they asked 26 study participants to identify the mixture that smelled differently in a sample set where two of three scents were the same. When the two scents contained components that overlapped by more than about 51%, most participants struggled to discriminate between them. The authors then calculated the number of possible mixtures that overlap by less than 51% to arrive at their estimate of how many smells a human nose can detect: at least 1 trillion.

Donald Wilson, an olfactory researcher at the New York University School of Medicine, says the findings are “thrilling.” He hopes that the new estimate will help researchers begin to unravel an enduring mystery: how the nose and brain work together to process smells.

A human nose has around 400 types of scent receptors. When the smell of coffee wafts through a room, for example, specific receptors in the nose detect molecular components of the odour, eliciting a series of neural responses that draw one’s attention to the coffee pot. But many details of that sequence are still unknown.

“The relationship between the number of odorants that we can discriminate and the number of receptors that we have is unclear,” says Noam Sobel, a neuroscientist at the Weizmann Institute of Science in Rehovot, Israel. Some scientists assume that having more types of scent receptors indicates a more-sensitive sniffer.

But that is not the only difficulty facing scientists exploring the bounds of our ability to smell.

“It’s hard to organize odours,” Wilson says. Researchers can group scents into categories, but the relationship between those categories is not clear; unlike colours or sounds, smells do not fall along a clear continuum. In practical terms, Wilson says, that makes it challenging to objectively compare the complex, musky scent of a US drugstore cologne like Axe body spray with a rival, such as Old Spice, or with something that smells of vanilla.

Those questions remain for future study. But the new findings may help put to rest at least one longstanding assumption, keller says. “My hope is that this helps to dispel the myth that humans have a bad sense of smell,” he says.