Scientists have known for years that human medications, from anti-inflammatories to the hormones in birth-control pills, are ending up in waterways and affecting fish and other aquatic organisms. But researchers are only beginning to compile the many effects that those drugs seem to be having. And it isn't good news for the fish.

One such drug, fluoxetine, is the active ingredient in the antidepressant Prozac. Like some other pharmaceuticals, fluoxetine is excreted in the urine of people taking it, and reaches lakes and waterways through sewage-treatment plants that are unequipped to remove it. 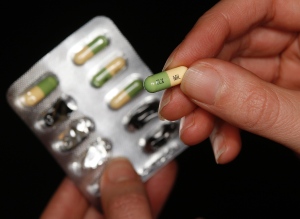 Residues of some drugs — including the antidepressant Prozac (fluoxetine) — in waterways seem to have adverse effects on fish behaviour.

To investigate the effects of fluoxetine, researchers have turned to a common US freshwater fish species called the fathead minnow (Pimephales promelas). Normally, fathead minnows show a complex mating behaviour, with males building the nests that females visit to lay their eggs. Once the eggs are laid and fertilized, the males tend to them by cleaning away any fungus or dead eggs.

But when fluoxetine is added to the water, all of this changes, said Rebecca Klaper, an ecologist at the University of Wisconsin-Milwaukee's Great Lakes Water Institute. Klaper presented her results this week at the 2012 meeting of the North American division of the Society of Environmental Toxicology and Chemistry in Long Beach, California.

Female fathead minnows seem to be unaffected by the chemical, but at concentrations of fluoxetine that are roughly comparable to the highest levels documented in fresh water, male minnows start to spend more time building their nests. When the dose is increased tenfold, the males "become obsessive, to the point they're ignoring the females", Klaper said.

When fluoxetine concentrations are increased yet again, fathead reproduction completely halts. "The males start killing the females," she said. Klaper also noted that if females are introduced a month after males are exposed to the chemical, the males no longer show this aggressive behaviour, but the females still don't lay any eggs. "Something happens in that time," she said.

Reproductive behaviour isn't the only thing that can be affected by trace pharmaceuticals. At the same symposium, Dan Rearick, an aquatic toxicologist from St Cloud State University in Minnesota, reported that a chemical found in birth-control pills, 17-β-estradiol, reduced the ability of fathead minnow larvae to elude predators.

After exposing the larvae to estradiol, Rearick then subjected them to sudden vibrations, similar to those produced by approaching predators. Using high-speed videos, he measured how long it took the minnows to curve their bodies into a C shape — an escape behaviour known as a C-start. "They are preparing to dart away," he explained. He found that, even at environmental levels of estradiol (20 or 100 nanograms per litre), the minnows' reaction time was significantly slowed compared to control larvae that had not been exposed to estradiol.

In a second experiment, he raised hundreds of estradiol-exposed and control larvae, and repeatedly put ten larvae from both groups together in a tank with a predator, a bluegill sunfish (Lepomis macrochirus). When half of the larvae in each experiment had been eaten, Rearick looked at which types of larvae were left.

The result agreed with the C-start experiments: of the surviving fish, only about 45% were from the estradiol-exposed group, with the majority of survivors coming from the control group (55%).

That difference might not sound like much, but using a multi-generation population biology model, Rearick found that it would be enough to produce a rapid population crash in the estradiol-exposed fish. Even if the fish weren't as badly affected, there would still be a slow, steady decline, he found. "There is probably a need for concern," he said.

Earlier work by a team of US and Canadian scientists had already shown that, in a small lake deliberately contaminated with estradiol, the population of fathead minnows declined sharply1. "They attributed that to reproduction failure," he said. "My data suggest it could be, in addition, an impact on larval survival."

Klaper took a similar approach in her investigation of fluoxetine effects in fathead minnows, finding a cascade of gene-expression changes in the male minnows' brains as the dose increased. "I'm in the process now of trying to figure out the [physiological] pathways these might be involved in," she said.