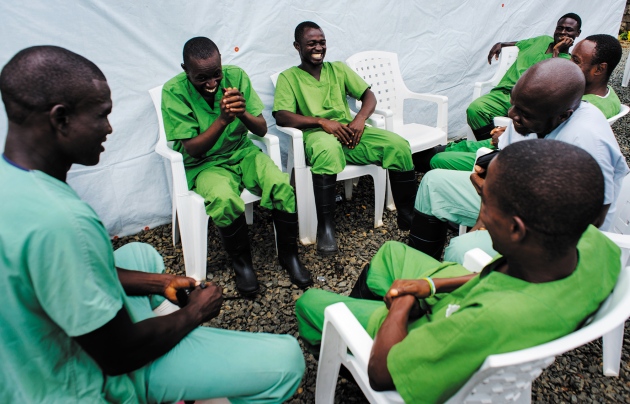 Health workers take a break from caring for Ebola patients in Monrovia, Liberia.

The Ebola epidemic that began December 2013 in a remote Guinean village spread across nations and lasted into 2015, killing 11,000 people and devastating West Africa. Also in 2015, the virus that causes Middle East respiratory syndrome (MERS) broke out in South Korea, only three years after its discovery in Saudi Arabia, thousands of kilometres away. And the Zika virus, previously rare even in Asia and Africa, began to take hold in the Americas; it has caused nearly 500,000 suspected cases there so far. Other viral outbreaks are sure to emerge. The scientific community must be ready to face them.

Four years ago — 14 months before the Ebola epidemic began — more than 20 laboratories around the world formed an unusual global collaboration to rapidly develop treatments for Ebola and other severe threats. The efforts of the collaboration, of which we are all part, produced the first Ebola drug deployed during the outbreak, as well as the first to demonstrate human benefit. Since then, we have become convinced that the collaborative strategy we followed could work as a model for finding treatments for other diseases.

Our goal was to produce antibodies that could prevent or fight off Ebola infection (see ‘Active search for passive therapies’). Our problem, based on conflicting results in the literature, was twofold: it was unclear which features of antibodies or other immune responses were essential for protection; it was also unclear which assays or conditions would reliably identify promising therapies. Several, often competing, laboratories were all working to find therapies, and they lacked a structure to test antibody samples collaboratively and find the best combinations.

Passive immune therapy can prevent deaths and stop outbreaks when no drugs or vaccines are available. A temporary supply of antibodies against an infectious disease is given to people who are newly infected or at risk. Antibodies (the proteins made by the immune system in response to a pathogen or vaccination) attach specifically to, say, a surface protein in the coating of a virus such as Ebola or Lassa to block infection and clear out pathogens.

Often, antibodies are often administered to stave off full infection until a person's own immune response matures and clears it. For example, premature babies born in winter are given antibodies to ward off respiratory syncytial virus.

To identify antibodies for passive immunotherapy, researchers screen panels of tens or hundreds of antibodies in cultured cells to see if any block infection. Those best at neutralizing the virus are then evaluated in rodents and other animals.

Four main challenges complicate discovery. First, many antibodies that perform well in cell culture do not do so in vivo, and some that are unimpressive in cell culture are protective in animals. Further evaluations of how different antibodies summon the immune system and provide protection are now illuminating the differences between in vitro neutralization and in vivo protection.

Second, antibodies that protect rodents may not work in primates, and vice versa. We are only beginning to understand when results from these assays can be used to decide which antibody samples to advance into humans.

Third, researchers perform their assays so differently that comparison across groups is difficult, if not impossible. Laboratories use different assays, cell types, virus isolates, dosing schedules and antibody concentrations.

Fourth, knowing which antibodies or antibody features to combine is complex. The best combination might involve samples from different laboratories in different parts of the world.

Our study compares results from many laboratories using an identical (and large) pool of samples and standardized protocols. This will enable us to select more effective therapeutic cocktails and to set research benchmarks by which to evaluate future studies.

In 2013, the VIC decided to conduct comprehensive analyses to understand — for two major families of human pathogen — which antibody features lead to protection in humans, and why. We received funding from the US National Institute of Allergy and Infectious Diseases (NIAID), part of the National Institutes of Health, and launched a global collaboration, the Viral Hemorrhagic Fever Immunotherapeutic Consortium (VIC). The consortium decided to vet both antibody samples and antibody assays and included as many samples and scientists as possible. We targeted filoviruses (Ebola, Marburg, Sudan and Bundibugyo) and arenaviruses (Lassa, Machupo, Junín and others).

We aimed for a two-pronged strategy: first, to quickly put forward potential therapies where none existed, and second, to identify strategies to speed future work. While we sought funding for the overarching analysis, two of our laboratories cobbled together resources to identify a three-antibody ‘cocktail’ against Ebola, the therapy known as ZMapp (Qiu, X. et al. Nature 514, 47–53; 2014).

This proof-of-concept therapy showed efficacy in non-human primates just as the West Africa outbreak became apparent. Our studies were in a race against a mounting health crisis.

Work on other antibody therapies continues. We have now set up a system to allow broader collaboration and the consolidation of information. Three years in, that system has helped us to identify promising therapeutics as well as strategies for assessing treatments.

The branch of our study that focuses on Ebola virus now includes more than 196 antibodies, contributed by dozens of investigators. Identical sets of antibodies are dispatched to multiple VIC laboratories to be profiled in complementary experiments on blinded samples. The analysis spans biochemistry, molecular structure, immunology, measures of the propensity for viral mutations to ‘escape’ recognition, and protection in animal models. We examine antibodies alone and in combination. In this way, the antibodies are evaluated in myriad assays, and the assays themselves are compared across laboratories to ensure reproducibility and to determine which assays and which measurable antibody features best correlate with protection in animals and people (see ‘Virus blockers’). 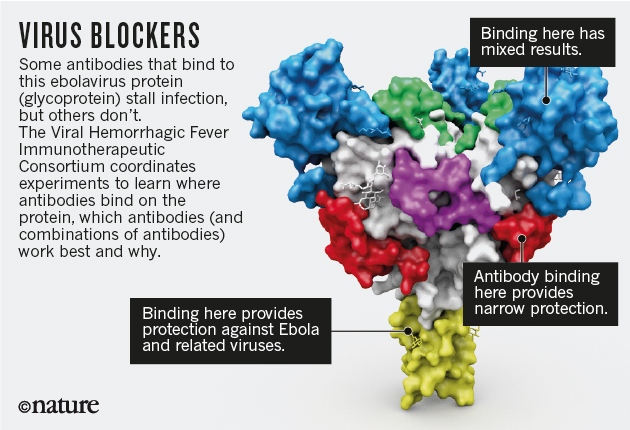 Today, the VIC includes more than 40 academic and industrial laboratories on 5 continents. Any laboratory in the world is welcome to join. We continue to solicit antibodies against the other filoviruses and many arenaviruses, including Lassa, which causes hundreds of thousands of infections each year and thousands of deaths.

Logistics are more difficult when researchers conduct physical experiments with common reagents. Examples of these sorts of collaboration include: the 14-lab IAVI Neutralizing Antibody Consortium (NAC), which is evaluating how best to design an HIV vaccine; and the collaboration for AIDS Vaccine Discovery (CAVD), which supports mini-consortia and encourages open-access data and resource sharing across multiple labs.

Usually, however, competition drives innovation. Before the VIC was formed, many scientists questioned whether our proposed collaboration could succeed. Sceptics suggested that people would not contribute their ‘favourite’ antibodies. They worried that collaboration on this scale would encourage misleading ‘group-think’ or be difficult to manage. How did we overcome these challenges?

“Sceptics suggested that people would not contribute their 'favourite' antibodies.”

First, our projects were set up so that collaboration would not undermine independent work. Our agreements protect the intellectual property of investigators who donate antibodies. Antibodies submitted to the collaboration are given code names so that our work does not compete with investigators’ ability to publish their laboratories’ antibodies independently, as an impressive list of publications shows (for a list, see Further Reading).

Second, we designed projects to test assumptions. With many laboratories analysing an identical pool of antibodies in parallel, inconsistent results are quickly recognized. We can now explain why the same antibodies can yield different results under different assay conditions. Our programme allows more scientists immediate access to an identical set of materials, facilitating a broader range of tests and comparisons than otherwise possible. Because of this, we have found new antibody features, not previously analysed, that correlate with protection.

The VIC’s approach could be applied to other pressing health issues. Several emerging viruses are prime candidates: MERS, Crimean–Congo haemorrhagic fever, Chikungunya, Nipah, Hendra and Zika. Beyond viruses, a large, organized consortium could find antibodies against neglected problems — such as those caused by the complex array of toxins in scorpion, spider and snake venom. To treat venomous bites or stings, medicine still relies largely on horse-serum treatments. Malaria and anthrax pose particular challenges, too.

Because investigators share the antibodies they develop in their own labs with the understanding that these could become components of therapeutic cocktails, the collaborative approach may be easiest to implement where research is mainly academic. Cross-comparison of different labs’ samples could also be useful in fields with larger markets, such as cancer immunotherapy, but commercial pressures and risk aversion could limit collaboration. That said, at least two clinical-stage projects have launched in the past two years to test multiple cancer drugs from different companies.

In academia, one challenge is the amount of time required in exchange for potentially limited recognition. In each lab, our collaboration requires work on many antibody samples identified by code names rather than inventors. A researcher may be one of a great many authors in the resulting manuscripts, whereas first-author manuscripts are often required to gain a PhD or a job after a postdoctoral appointment. Hopefully the benefits outweigh the costs: trainees have a larger data set to explore, and can address their own questions in spin-off studies. Also, the semiannual meetings of the VIC, in which we integrate data from disparate approaches and international sources, provide experience that transcends what young scientists would receive working in a single lab.

Another problem for projects at this scale is funding. Fortunately, the VIC was catalysed by a NIAID Center of Excellence in Translational Research grant. There are few other funding sources and administrative mechanisms designed to support such collaborations. Public-funding programmes have tended to spend most of their research resources in their own nations, a problem for global networks. Institutions with a global focus are in a better position to support similar worldwide collaborations. These include the World Health Organization or the World Bank, and private philanthropic organizations such as the Bill & Melinda Gates Foundation in Seattle, Washington (which supports the NAC and the CAVD), the Howard Hughes Medical Institute based in Chevy Chase, Maryland, and the Wellcome Trust in London.

Much could be gained if these challenges are met and collaborations set up before an epidemic gets under way. It is difficult to test potential treatments against standard of care during an outbreak: resources and time are too scarce to test each possibility; the location and timing are unpredictable, and an outbreak usually sickens fewer people than the typical clinical trial requires for drug approval. If there are many potential therapies to test, there must be an ethical mechanism to decide what is evaluated. Each local ministry of health must be engaged to assess whether studies are wanted, how studies and patients are prioritized and who owns the results. Each location may make a different decision, and all decisions must happen quickly.

Collaborations such as we describe between a multi-institution body of experts — with agreements, trust, a research pipeline, an organized arsenal of therapeutic options and decision-making criteria already in place — could provide unbiased scientific advice for local authorities and international aid organizations to ensure a swifter, more effective response.