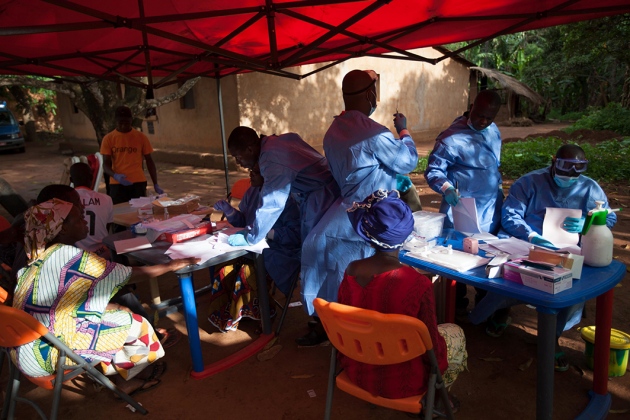 A pioneering clinical trial in Guinea could provide a model for use in future disease outbreaks.

When Ebola broke out in West Africa in December 2013, triggering the largest-ever epidemic of the disease, there was no vaccine or drug that had been shown to be safe and effective in people. Just 20 months later, a vaccine seems to confer total protection against infection, according to the preliminary results of a trial in Guinea that were published on 31 July (A. M. Henao-Restrepo et al. Lancet http://dx.doi.org/10.1016/S0140-6736(15)61117-5; 2015). Nature looks at the implications of the trial’s success for the on­going epidemic, which has killed more than 11,000 people, as well as for how future clinical trials are conducted in outbreaks.

How did the vaccine come about?

Called rVSV-ZEBOV, it consists of a livestock virus that has been genetically engineered to masquerade as the Ebola virus (see ‘Masters of disguise’). It was developed by the Public Health Agency of Canada, licensed to the pharmaceutical company Merck and tested by an international collaboration of funders, scientists, companies, organizations and govern­ments, including the World Health Organization (WHO). The trial was carried out in Guinea, where the epidemic began, and used a ‘ring’ design in which contacts of infected people — such as members of the same household — are vaccinated, as are any subsequent contacts of those people. It comprised two groups: one received immediate vaccination and the other received the vaccine three weeks later.

What did the trial find?

Of the 2,014 contacts (of 48 people infected with Ebola) who received the vaccine immediately, none developed Ebola after a 10-day window — enough time for the body to summon an immune response to the vaccine and for any pre-existing Ebola infections to have revealed themselves. (A few people did develop the disease between 1 and 10 days after vaccination.) By comparison, 16 people out of the 2,380 contacts (from 42 cases) in the control group became infected during this time. The vaccine was therefore deemed to have provided 100% protection against the virus in this trial.

100% protection sounds too good to be true.

It probably is. The study was quite small, so the true protection rate may be slightly lower, says Marie-Paule Kieny, assistant director-general for health systems and innovation at the World Health Organization (WHO). An independent committee over­seeing the trial considered the preliminary results so convincing that the control group was dropped on 26 July, and all contacts are now being vaccinated immediately. This will yield more data on the true levels of protection. But there is already excitement about the vaccine. “The results as reported are so striking that even if there are some issues in the study, it appears very likely that it’s effective,” says Jesse Goodman, a former US Food and Drug Administration official who is now at Georgetown University in Washington DC. 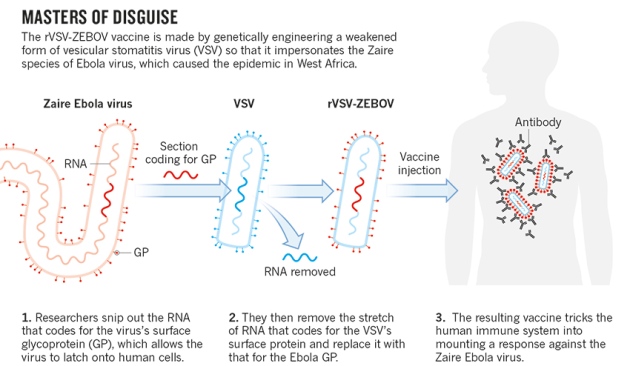 For how long does the vaccine work?

That is unknown. The trial was designed to test whether ring vaccination could snuff out outbreaks, and the several weeks of protection that it is known to provide is enough to do this. “That’s good news for an outbreak situation,” says Adrian Hill, director of the Jenner Institute at the University of Oxford, UK, who is involved in testing a different Ebola vaccine. However, he says, it remains to be seen whether the protection lasts any longer. “Will it work at six months? This trial doesn’t tell us that.” Longer-term — ideally lifelong — immunity is needed for a vaccine to provide sustained protection to health workers and other high-risk groups during an epidemic, or to mass-vaccinate populations should Ebola become endemic. Other vaccine trials, including the one that Hill is involved in, are testing for longer-term protection. But the fall in the number of Ebola cases — to 20–30 per week over the past few months — means that the trials may struggle to provide clear results.

Could the rVSV-ZEBOV vaccine help to end the epidemic in West Africa?

The vaccine will continue to be used in Guinea as part of the clinical trial. Many researchers hope that it will be used in Liberia and Sierra Leone too, to end the epidemic — although case numbers have plummeted, there is a continued risk of flare-ups as well as of spread to nearby countries. However, some regulatory hurdles need to be cleared first. Deployment in those nations could occur as part of an expanded clinical-trial regime or through emergency authorization by regulators, says Gregory Hartl, a spokesperson for the WHO. The authorities there are now considering whether the available data are sufficient to license the vaccine for use outside a clinical-trial setting, a process that could take weeks to months, according to the WHO.

Is it unusual to do a trial during an outbreak?

Yes. Getting clinical trials approved by regulators usually takes years, as does conducting the gold standard of randomized controlled trials. That means that outbreaks tend to be over before trials can even begin. Clinical trials are also usually done in well-equipped research hospitals, and quality trials have generally been considered impossible to carry out in the often-atrocious field conditions of deadly outbreaks (see Nature 513, 13–14; 2014). The urgency of tackling Ebola changed all that. In September, the WHO-supported collaboration pulled out all the stops to accelerate testing of treatments and vaccines that had shown promise in animals. It cut through the red tape and came up with trial designs that could quickly provide data at least good enough to inform efforts to control the outbreak. The rVSV-ZEBOV trial is one of several that came about as a result.

Can the fast-track approach be applied to other diseases?

Hill suggests that vaccines could quickly be developed for many other epidemic threats. He recommends that research on vaccines against such pathogens be accelerated so that clinical trials can be done now to test their safety; those that pass muster would be stockpiled, ready for efficacy tests as soon as an outbreak occurs. Pathogens considered priority health threats include Marburg virus, which is in the same family as Ebola, and the viruses that cause Middle East respiratory syndrome (MERS), Lassa fever and chikungunya.

Are lessons likely to be learned from rVSV-ZEBOV’s success?

The hope is that it will provide a model for dealing with future outbreaks. “This is illustrating that it is feasible to develop vaccines much faster than we’ve been doing,” says Hill. And there seems to be support for change at the highest level. Margaret Chan, director-general of the WHO, said on 31 July that the agency is developing a “blueprint” for accelerated development of measures to counteract potential epidemics. The plan aims to reduce the time from the recognition of an outbreak to availability of countermeasures to four months or less, and would include putting trial designs and regulatory approvals in place in advance of an outbreak. “No one wants to see clinicians, doctors, left empty-handed ever again,” said Chan.