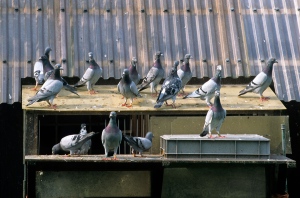 Homing pigeons can be used to monitor air pollution in the cities where they live.

Nesting birds that feed on insects that hatch in lake or stream-bed sediments may make good biomonitors for pollution, says Thomas Custer of the US Geological Survey's Upper Midwest Environmental Sciences Center in La Crosse, Wisconsin. That's because any contamination in the sediment will make its way into the birds and into their eggs and young.

Speaking at the annual meeting of the Society of Environmental Toxicology and Chemistry in Long Beach, California, last week, Custer described how his group has also used swallows to monitor a 2010 project intended to remove contaminated sediments from Ohio's Ottawa River near Toledo. Not all the data are in yet, but things look good, he says. "From the standpoint of the birds, this is not a hotspot."

One advantage of using swallows for such work is that they are known to forage over fairly small distances, rarely more than 500 metres from their nests. "They represent very localized contamination," Custer says.

Also, researchers can attract them to areas of interest simply by putting out nesting boxes on poles, because nesting sites are the birds' most important environmental limit, Custer says.

Roger Helm, head of the environmental contaminants programme for the US Fish and Wildlife Service (which administers the country’s national wildlife refuges) in Arlington, Virginia, agrees. A huge advantage of using swallows, he says, is that they provide a "replicable" experimental approach, which is much better than gathering "bits of data" from randomly collected animals.

Furthermore, he adds, it can even help the birds, because the presence of nesting boxes improves the birds' habitat. And the loss of a few eggs and nestlings to researchers isn't likely to hurt the species, Helm says. "It is extremely rare for more than 50% of the nestlings to survive, anyway," he says. "The wonderful thing about this kind of work is you can say something meaningful. The worst kind of science does a fair amount of harm and has nothing to say because you don't have the sample size to draw a reasonable conclusion. You kill a bunch of things, and what do you know?"

Swallows are not the only birds being used for such purposes. Richard Halbrook, a wildlife toxicologist at Southern Illinois University in Carbondale, uses homing pigeons to monitor air quality.

Homing pigeons — once used to carry messages over long distances — are still bred by hobbyists around the world, who use them for competitions. Many birds are kept in lofts, and often in cities, so breathe ambient air. Even better, their life histories are well known, which is not possible for wild birds. Pigeon hobbyists "keep pretty elaborate records", Halbrook says.

In a pilot study involving birds purchased from hobbyists in China, the Philippines and the United States, Halbrook found stunning health-related differences that were apparently related to air quality. In Beijing and Manilla, for example, he found black lungs and enlarged testes. In one case, a testicle was so huge it was one-fifth the weight of the entire bird. But in less polluted cities elsewhere in China and in the United States, the birds' organs were much healthier.

Plus, the lungs and livers from the birds from Beijing contained three or four times more polycyclic aromatic hydrocarbons, common by-products of fossil-fuel burning, than did those from areas with better air quality. "This suggests that other species, including humans, may also have adverse effects" from these environmental contaminants, he says.