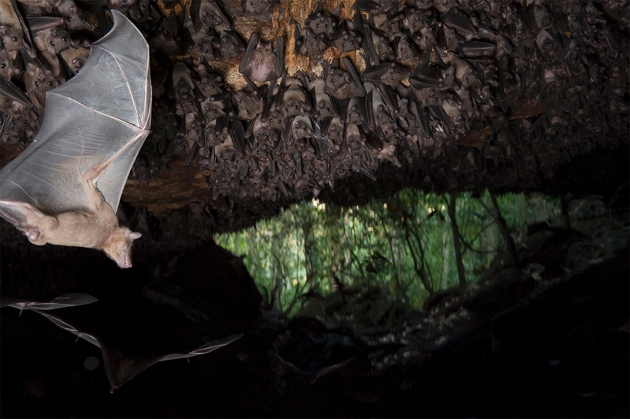 Adult Egyptian fruit bats have a hand in what young bats learn.

It takes a village to teach a bat how to communicate. Baby Egyptian fruit bats learn calls from their mothers, but research now shows that they can learn new dialects, or the pitch of their vocalizations, from the colony members around them.

Learning to communicate by repeating the noises that others make is something only a few mammal groups — including humans, whales and dolphins — are known to do. Researchers call this vocal learning, and it's something that they're starting to study in bats. Findings published on 31 October in PLOS Biology1 show that bats can also pick things up from the group around them, a process that the authors dub crowd vocal learning.

Bats are becoming the best organism to use in studies of how mammals learn to vocalize, because they’re more easily manipulated in the lab than whales or dolphins. The latest research underscores their importance, says neuroscientist Michael Yartsev of the University of California, Berkeley, who was not involved with the work.

Songbirds demonstrate vocal learning beautifully, but their brains are organized differently from human brains. Pinning down a mammalian model to explore how this function develops is important for neurologists studying vocal learning, says Yartsev.

The call of the colony

Egyptian fruit bats (Rousettus aegyptiacus) are highly social and live in colonies with dozens to thousands of other bats. To see how the pups learn dialects, researchers caught 15 pregnant Egyptian fruit bats and took them into the lab. To control for potential genetic effects, they ensured that the mothers weren't closely related. The team then split the mothers into three groups of five and put each group into one of three chambers, where the mothers gave birth to their young. The scientists used recordings of wild Egyptian fruit bat colonies that were low in frequency, high or a mix of both frequencies, and then piped one pitch into each chamber.

The team released the mothers back into the wild after 14 weeks, around the time the young would naturally be weaned. After another 17 weeks in the enclosures, the young bats were mimicking the pitch of the recordings they had grown up with: bats in the high-frequency chamber made more high-frequency calls than the bats that grew up hearing the other two frequency soundscapes.

The findings make sense, says Yossi Yovel, a neuroecologist at Tel Aviv University in Israel and a study co-author. Baby bats grow up in the dark, surrounded by noisy neighbours, so it would be odd if they didn’t pick things up from the animals around them. “It’s perhaps not surprising, but it was never demonstrated before now.”

Yovel and his team plan to release the young bats into the wild and observe whether their dialect changes to match that of the wild bats, or whether the colony members pick up the experimental bats’ dialect.

Studying how this process works in mammalian brains could provide insight into how humans learn language, too, says Sonja Vernes, a neurogeneticist at the Max Planck Institute for Psycholinguistics in Nijmegen, the Netherlands. “If we can understand how bats do it, I think we can learn something about how humans do it.”