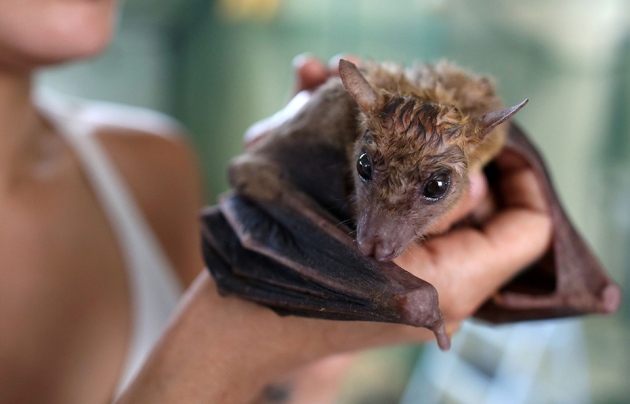 The Egyptian fruit bat (Rousettus aegyptiacus) is one of four species known to teach vocal sounds to its young.

Some bats sing or call just as birds and humans do. But how they learn their calls and melodies is a mystery — one that scientists will try to solve by sequencing the genomes of more than 1,000 bat species.

The project, called Bat 1K, was announced on 14 November at the annual meeting of the Society for Neuroscience in San Diego, California. Its organizers also hope to learn more about the flying mammals’ ability to navigate in the dark through echolocation, their strong immune systems that can shrug off Ebola and their relatively long lifespans.

“The genomes of all these other species, like birds and mice, are well-understood,” says Sonja Vernes, a neurogeneticist at the Max Planck Institute for Psycholinguistics in Nijmegen, the Netherlands, and co-director of the project. “But we don’t know anything about bat genes yet.”

Some bats show babbling behaviour, including barks, chatter, screeches, whistles and trills, says Mirjam Knörnschild, a behavioural ecologist at Free University Berlin, Germany. Young bats learn the songs and other sounds from older male tutors. They use these sounds during courtship and mating, when they retrieve food and as they defend their territory against rivals.

Scientists have studied the vocal sounds of only about 50 bat species so far, Knörnschild says, and they know much less about bat communication than about birds’. Four species of bats have so far been found to learn vocal sounds from each other, their fathers and other adult males, just as a child gradually learns how to speak from its parents1.

The four species are: the greater sac-winged bats (Saccopteryx bilineata), the Egyptian fruit bat (Rousettus aegyptiacus), the pale spear-nosed bat (Phyllostomus discolor) and the greater spear-nosed bat (Phyllostomus hastatus). The bats exhibit diversity in their geographic locations, gender and age of vocalizing and frequency and types of sounds.

Genetic studies have identified at least one gene in bats that is linked to speech and language, called FOXP22. The gene is also known to have a role in how people learn language, and in vocal learning in songbirds. The versions of FOXP2 found in these species are often very similar, but bats are an exception. FOXP2 seems to have evolved to be much more diverse in bats than in people, Knörnschild says. The reason why is a mystery.

Researchers working on the Bat 1K project expect to find that other genes are also involved in communication, and that many more bat species have the ability to learn songs, calls or other sounds. “It's not a rare trait,” Knörnschild says. “I'm becoming convinced that there’s a whole continuum in bat vocal learning, and it’s more widespread than just four species.”

Bats’ echolocation ability has been studied for many years, partly because of its applications to sonar and radar. But scientists know very little about the acoustic communication and social behaviour that drive how bats learn their songs and sounds, says Michael Yartsev, a neurobiologist at University of California, Berkeley. The study of vocal learning in bats is “nearly completely untapped”, he says — likening it to the state of research into birdsong 60 years ago.

Songbirds have been studied in detail, especially the zebra finch (Taeniopygia guttata), which is easy to breed in a lab, says Tecumseh Fitch, a cognitive biologist at the University of Vienna. But birds don’t have a mammalian brain or use a larynx to make sounds. Some mammals, including elephants, whales, pinnipeds and dolphins, display vocal learning, but bats are much more practical to study. “My hope is that bats will become the model species for vocal learning,” Fitch says.

The article has been clarified to reflect that not all bats that make vocal sounds sing.