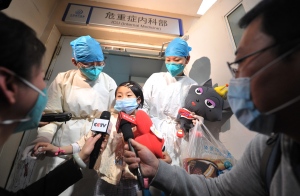 The H7N9 avian flu virus greatly expanded its geographical range over the weekend, with two new  human cases reported in Beijing in the north of China, and another two in Henan province in the centre. Up until now, the virus had been restricted to Shanghai and neighbouring regions on the Eastern seaboard. Experts worry that this new development may be the start of an expansion that may see H7N9 quickly fan out across large areas of China, and beyond.

There is still no evidence of any sustained human-to-human spread of the H7N9 virus. But the World Health Organisation confirmed on Saturday that Chinese authorities are investigating two suspicious clusters of human cases. Though these can arise by infection from a common source, they can also signal that limited human-to-human transmission has occurred.

"I think we need to be very, very concerned" about the latest developments, says Jeremy Farrar, director of the Oxford University Clinical Research Unit in Ho Chi Minh City, Vietnam.

The Beijing Municipal Health Bureau also announced today that a 4-year-old contact of a 7-year-old girl who had been hospitalized with the virus tested positive for the virus too, despite showing no symptoms. This is the first asymptomatic case. Along with several mild cases already reported, it suggests that the virus might be more widespread among humans than the numbers of reported cases suggest.

Perhaps counterintuitively, such mild cases are "very worrying", says Farrar. That is because reduced virulence can often point to further genetic adaptation of the virus to infection of human beings — and thus greater potential to spread.

Experts say the surge in human cases is troubling, with 63 infections and 14 deaths reported as of Monday, up from 24 cases barely a week ago. China reported its first cases of H7N9 on 31 March; in just two weeks the number of H7N9 cases has exceeded the 45 H5N1 cases China has reported over the decade since that virus began causing outbreaks.

If that pace keeps up or accelerates, H7N9 "could be a significant public health problem” even if it remains an infection that people catch from animals, says Marc Lipsitch, an epidemiologist at the Harvard School of Public Health in Boston, Massachusetts.

Genetic analyses of the new virus show that it has several mutations making it more adapted to humans than is H5N1. "This looks very different from H5N1," says Farrar. "We never saw this number of presumed avian/animal to human transmissions in such a short space of time."

H7N9 is proving a more difficult foe in other ways too. Concern that the virus would be next to impossible to track or control because it does not cause serious illness in poultry and other birds has been reinforced by the new cases in Beijing and Henan province. These appeared out of the blue.

In the case of H5N1, outbreaks in poultry precede human outbreaks and tell public health workers where the public health threat lies. But with H7N9, it is only the appearance of new human cases that shows where the silent spread in birds or other animal reservoirs is heading, says Vincent Martin, interim head of the UN Food and Agriculture Organisations's Emergency Prevention System for Transboundary Animal and Plant Pests and Diseases (EMPRES) in Rome.

Chinese authorities have already identified H7N9 in birds in live bird markets in Shanghai and other cities. But despite intensive surveillance of poultry, wild birds, pigs and other animals, the animal reservoirs remain largely unknown. "With so little knowledge of the possible reservoir host, we're a bit walking in the mist here," says Marius Gilbert, an expert in the epidemiology and ecology of avian flu viruses at the Université libre de Bruxelles in Belgium.

The virus may have reached Beijing and Henan provinces via the poultry trade, which is extensive in China, with trade routes criss-crossing the length and breadth of the country. That could mean that the main reservoir of virus in animals is still restricted to the Shanghai region.

But it is also possible, Gilbert says, that H7N9 has been spreading silently in poultry or other animals over a far greater geographical area than thought. If so, " new cases will keep popping up left right and centre".

Either mechanism could transport the virus far beyond China's borders. "Neighbouring countries need to be on high alert," says Martin, adding that FAO is in daily contact with countries as far away as in Africa, to discuss the surveillance and other measures needed to try to prevent the introduction of the virus.

Nailing down the transmission routes of the virus in China alone is a huge challenge; the country is vast, and home to some 6 billion poultry as well as many migratory and other wild birds that may have a role in spreading the virus. On Wednesday, Martin will convene a meeting of international experts to be at the FAO in Rome to help draw up surveillance guidelines for China and the wider region.

Despite the difficulties of detecting H7N9 in poultry and birds, Martin remains optimistic that so long as the virus does not start to spread among humans the potential number of human cases can be curtailed by taking urgent tough measures — such as keeping poultry flocks away from wild birds and people and restructuring its live bird markets.

"It's too soon to say how big a threat H7N9 poses because we don't know how many animals of which species have it, how genetically diverse it is, or what the geographic extent is," says Lipsitch, "It looks as though it will be at least as challenging as H5N1."