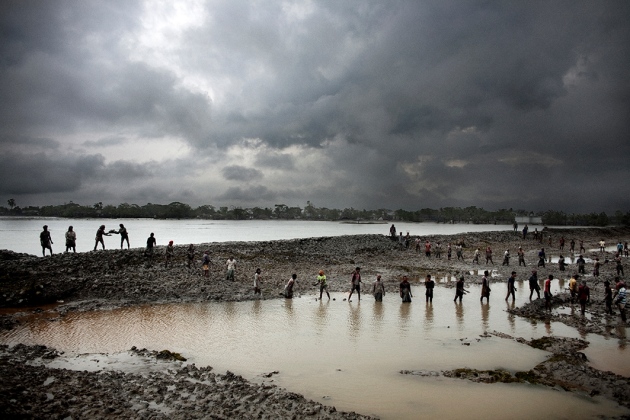 Men form a human chain to rebuild a flood barrier for a low-lying island in Bangladesh after it was hit by Cyclone Aila in 2009. A Green Climate Fund project supports climate-resilient infrastructure in Bangladesh.

Major questions are swirling around the operations of a United Nations fund that is supposed to channel billions of dollars to help developing nations adapt to climate change and slow its pace.

The Green Climate Fund (GCF) was established at UN talks in Cancún, Mexico, five years ago, and developing nations see it as one of their prime hopes for financial assistance in tackling a warming world.

Yet the fund, which is administered by a small team in Incheon, South Korea, is struggling to raise cash from rich nations. And although it approved its first aid commitments on 6 November at a meeting in Livingstone, Zambia, observers say they are concerned that the GCF has cut corners so as to announce handouts before international climate talks in Paris in December.

“We are worried about the fund’s social and environmental safeguards, consultation processes, accountability mechanisms and transparency,” says Brandon Wu, a policy analyst who focuses on climate finance at the non-governmental organization (NGO) ActionAid in Washington DC and who attended the Zambia meeting.

The Cancún agreement recommended that climate aid total US$100 billion a year by 2020, but the balance between private and public money, and how much of it would flow through the GCF, has not been made clear.

In the world of climate finance, the GCF is a tiny player. If funding for renewable energy and energy-efficiency programmes is included, hundreds of billions of dollars already flow round the globe each year, says the Climate Policy Initiative (CPI), an international think tank. Still, the GCF is the largest international public climate fund.

The fund’s initial target was to collect $10 billion before it started handing out cash, which it intends to divide equally between mitigation and adaptation projects. By October, it had received pledges of $10.2 billion — which foreign-exchange rate variations have reduced to $9.1 billion. But only $5.83 billion had been formally agreed, and just $852 million had reached the fund’s pocket. The United States is the most significant missing name from the list of donor countries: last year it promised $3 billion, but it has yet to sign an agreement to contribute money.

“At this pace we will not be able to do anything much,” says Dipak Dasgupta, an economist and India’s representative on the 24-person GCF board. The proposals approved in Zambia — $168 million for eight climate projects — are “small change”, he says. The approvals include a wetlands resilience programme in Peru, climate-resilient infrastructure in Bangladesh and a scheme of ‘green bonds’ to finance sustainable energy ventures in Latin America and the Caribbean, but seven of the schemes will not receive money until they meet further project-specific conditions.

Developed nations may be reluctant to transfer their money to the fund, says Timmons Roberts, who studies climate change and economic development at Brown University in Providence, Rhode Island. “Many developing countries and NGOs believe that the funding should all flow through the GCF,” he says. “However, contributor countries have always defended their ability to funnel their funds through channels they control, whether through their own bilateral agencies (like USAID) or through dedicated World Bank funds.”

There are also concerns about how the GCF is run, says Wu, who attended the Zambia meeting as a permitted ‘civil society observer’. Wu is worried that indigenous communities were not adequately consulted before the approval of $6.2 million for the Peruvian wetlands programme, for example. GCF documents say that a consultation was carried out, but for this and for other projects, the fund has no independent verification of its claims, says Andrea Rodríguez Osuna, who works in Mexico City for the non-profit environmental law organization AIDA and was also present in Zambia.

Nor is the GCF transparent about its processes, Rodríguez Osuna adds. “The fund has no information disclosure policy and no accountability mechanism, yet the board is approving project proposals,” she says.

For the eight projects approved at the board meeting, for example, only proposal documents were publicly available (and in the case of two private-sector projects, only a summary). “These are hardly the unbiased sources of information needed to evaluate a project’s merits or any potential negative impacts,” Wu says. Project reviews made by the fund’s board and by an independent technical advisory panel are not publicly released, and GCF officials repeatedly failed to answer questions asked by Nature for this article.

For some, another contentious issue is that the GCF is flowing its money mainly through international organizations, such as multilateral or private banks such as the World Bank and Deutsche Bank — rather than sending it directly to institutions in developing countries where the projects are taking place.

The GCF is still new and is seriously understaffed, Rodríguez Osuna adds; and observers hope that their worries are teething problems. Its executive director, Héla Cheikhrouhou, has promised “many more projects under development”.

Claims have already been made that rich nations are upscaling public climate funding. But experts say that there is little clarity on whether the cash is new money, or being re-routed from elsewhere, such as from overseas development assistance funds. “Definitions of what constitutes new money haven’t been agreed on,” says Barbara Buchner, who leads CPI’s global finance programme in Venice, Italy.

There is one thing is for certain, Buchner says — total finance for low-carbon energy projects and for adapting to and mitigating climate change is far short of estimates of the need. “We need trillions, not billions,” she says.

This article originally included a quote from Barbara Buchner about global climate finance that could have – incorrectly – been read to refer to the Green Climate Fund. It has now been removed.