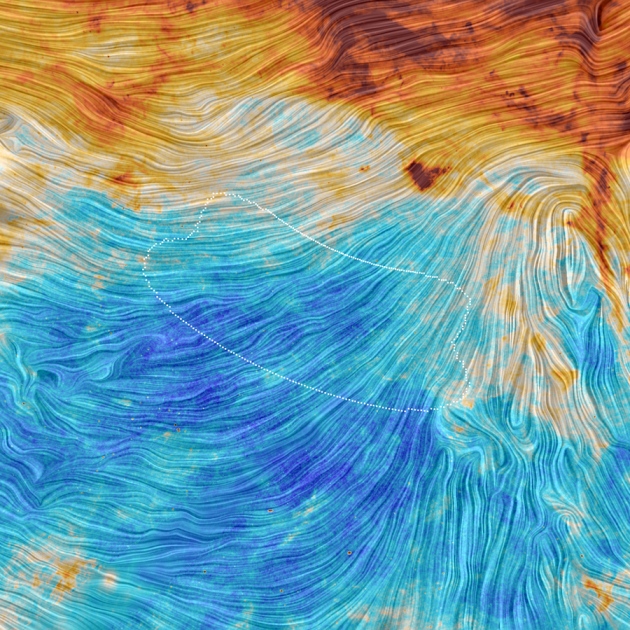 The region of the southern sky where the BICEP2 telescope observed microwave polarization, shown as dotted lines over Planck data.

A team of astronomers that last year reported evidence for gravitational waves from the early Universe has now withdrawn the claim. A joint analysis of data recorded by the team's BICEP2 telescope at the South Pole and by the European spacecraft Planck has revealed that the signal can be entirely attributed to dust in the Milky Way rather than having a more ancient, cosmic origin.

The European Space Agency (ESA) announced the long-awaited results on 30 January, a day after a summary of it had been unintentionally posted online by French members of the Planck satellite team and then widely circulated before it was taken down.

The March 2014 finding was released by researchers operating a radio telescope at the South Pole called BICEP2. The result had hinged on the discovery of a curlicue pattern in the polarization of the cosmic microwave background, the Big Bang's relic radiation. The team attributed the pattern to gravitational waves — ripples in space time — generated during the earliest moment of the Universe, when cosmologists believe that the cosmos underwent a brief but tumultuous episode of expansion known as inflation. If detected, the primordial waves would confirm the highly successful but unproven theory of inflation.

But dust in the Milky Way also emits polarized light that can have the same curlicue pattern imprinted on it. Astronomers have suggested several times over the past year that the BICEP2 team had been fooled by that Galactic signal (see 'Full-Galaxy dust map muddles search for gravitational waves'). The Planck–BICEP2 analysis confirms that BICEP2 cannot claim to have seen evidence of primordial gravitational waves.

All down to dust

In the joint analysis, the researchers overlaid data recorded by the BICEP2 telescope at a frequency of 150 gigahertz (GHz) with data recorded from the same patch of sky by Planck at 353 GHz, a frequency at which almost all the polarized light comes from dust. (Planck also records polarization signals at lower frequencies.) The two data sets proved to be a match — the region in which BICEP2 found its strongest signal is the same place in which the Planck dust signal is strongest, indicating that the BICEP2 signal is due almost entirely to dust.

“This joint work has shown that the detection of primordial B-modes is no longer robust once the emission from Galactic dust is removed,” says Planck astronomer Jean-Loup Puget of the University of Paris-Sud in Orsay in the ESA press release. “So, unfortunately, we have not been able to confirm that the signal is an imprint of cosmic inflation.”

“I no longer believe that BICEP2 detected the signal of gravitational waves,” says cosmologist Marc Kamionkowski of Johns Hopkins University in Baltimore, Maryland, who is not a member of either team.

Planck researcher George Efstathiou of the University of Cambridge, UK, says that the conclusion is no surprise. “I don’t know why people are so excited,” he says. “There’s nothing dramatic here from the science point of view.”

Efstathiou characterized the 29 January leak as both “unfortunate” and “careless”. “The BICEP people felt that they had not handled the publicity right the first time” and that everyone was eager to make public the joint analysis in a more cautious manner.

Cosmologist Raphael Flauger of Carnegie Mellon University in Pittsburgh, Pennsylvania, who was among the first researchers to question the BICEP2 findings, concurs with that view. “It is somewhat unfortunate that such an eagerly awaited result was presented to the public in this way,” he notes. He declined to discuss the details of the joint analysis because the paper was not yet available, but he noted that “what is clear from these plots is that the levels of dust were underestimated in the BICEP2 results presented in March, in agreement with what was said in our paper” (see 'Gravitational wave discovery faces scrutiny').

“When we first detected this signal in our data, we relied on models for Galactic dust emission that were available at the time,” says John Kovac, a principal investigator of BICEP2 at the Harvard-Smithsonian Center for Astrophysics in Cambridge, Massachusetts, in the ESA press release. “These seemed to indicate that the region of the sky chosen for our observations had dust polarisation much lower than the detected signal.”

The latest findings do not mean that it is impossible to find evidence of gravitational waves in the microwave background — only that BICEP2 could not conclusively detect a signal amid the Galactic noise.

“There is a clear path forward,” says Kamionkowski. “If we do more measurements of this type at multiple frequencies, we will be able to separate out the dust signal from the [primordial] signal precisely” and do a more thorough search for gravitational waves.