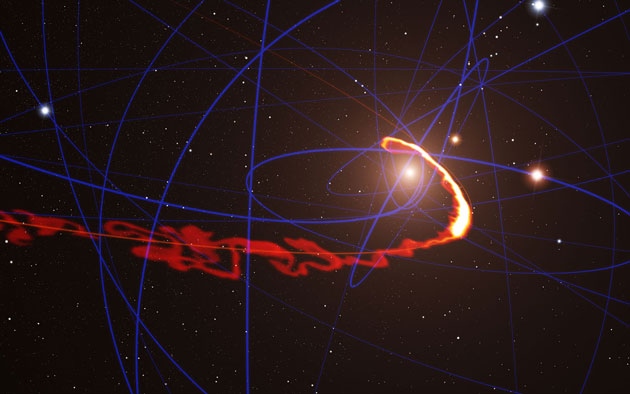 An artist's illustration of the G2 gas cloud in its death spiral around the Milky Way's giant black hole.

A cloud of gas has begun its death spiral around the supermassive black hole lurking at the heart of the Milky Way, astronomers announced today. Their observations show that the cloud is stretching like a piece of taffy, pulled by the black hole’s gravitational forces, which are expected to tear it to pieces in the coming months.

Astronomer Stefan Gillessen will be following every gory detail of the death, which offers a rare opportunity to learn more about black holes in action. He and his colleagues at the Max Planck Institute for Extraterrestrial Physics in Garching, Germany, discovered the gas cloud, dubbed G2, in 2011. The researchers have been tracking its movements ever since, using the European Southern Observatory’s Very Large Telescope in Chile. Many λ-ray and X-ray astronomers have also tuned in to the drama at the centre of the Galaxy.

But the latest measurements, made in April, are in the infrared part of the spectrum. They show the speeds of different parts of the cloud. Most of the gas is travelling away from Earth and towards the black hole. But the head of the cloud has already accelerated around the black hole and is now coming back in the opposite direction, as revealed by a shift in the light’s wavelength towards the blue end of the spectrum. “The cloud is behaving like a comet swinging by the Sun,” says Gillessen. The work will be published in an upcoming issue of the Astrophysical Journal.

The cloud, which has a mass three times that of Earth, did not brighten noticeably as it approached the black hole. That casts doubt on a theory that a faint star could be hidden within G2, because such a star, if present, would heat up as the cloud draws closer to the black hole and give off more hot, bright gas through evaporation. “What we have observed so far is completely consistent with a simple gas cloud,” says Gillessen.

But Avi Loeb, a theoretical astrophysicist at Harvard-Smithsonian Center for Astrophysics in Cambridge, Massachusetts, who has championed the star theory, isn’t ready to give up on it yet. He points out that the cloud has so far remained intact and follows an elliptical orbit, as would be expected for a star.

The ultimate test of the star theory will come in February or March of next year, when the centre of cloud will make its closest approach yet to the black hole. “If the cloud doesn’t dissolve then, there must be a central nugget holding it together,” says Loeb.