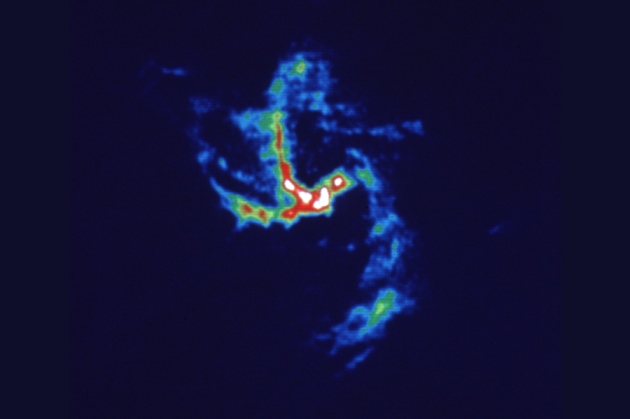 Dale Frail couldn’t resist the prospect of watching a black hole swallow its prey. Frail, who is in charge of the Very Large Array (VLA) of radio telescopes near Socorro in New Mexico, had seen a report last month about a long-lived X-ray flare emanating from the centre of the Milky Way, home to a supermassive black hole called Sagittarius A* (Sgr A*). Astronomers were speculating that the flare might be a sign that a gas cloud they had been tracking had begun its death spiral into the black hole.

Frail was sceptical. The cloud’s death was not expected until between September this year and March 2014. But Frail did not want to risk missing the action. Within hours of seeing the report, he had trained the VLA’s radio dishes on the scene, only to find nothing remarkable. Frail was puzzled. If the flare wasn’t the arrival of the gas cloud, what was it?

An answer soon came from other tele­scopes watching the drama at the centre of the Galaxy: the flare was coming from a magnetar, a highly magnetized kind of pulsar, or rotating neutron star. Its position near Sgr A* makes it a precious find. The magnetar’s regular radio pulses could be used to measure the warping of space-time near the monster black hole and to test predictions of Einstein’s general theory of relativity.

“There’s huge interest in finding pulsars around supermassive black holes, and this is the first example,” says Geoffrey Bower, a radioastronomer at the University of California, Berkeley, who carried out the recent VLA observations. “There’s a lot we can learn from this.”

The magnetar’s accidental discovery is a by-product of astronomers’ excitement about the arrival of the gas cloud, dubbed G2. The cloud, which is about three times the mass of Earth, was first spotted near Sgr A* in 2012 (and was later found in 2002 data). Its arrival would deliver insight into how objects accrete into the swirling disk of material around a black hole, as well as offering the first chance for astronomers to measure the time that it takes for objects to be captured and swallowed up.

Every flicker of emissions from Sgr A* sparks a flurry of speculation, intensifying the usual cycle of observation and coordinated follow-up that characterizes high-energy astronomy. Many telescope directors are scheduling additional monitoring of the Galactic Centre. The VLA, for example, is already scanning radio frequencies around Sgr A* every two months, and will do so every month once G2 arrives.

“I don’t think there was ever such a large camp of telescopes looking at the Galactic Centre,” says Stefan Gillessen, an astronomer at the Max Planck Institute for Extra­terrestrial Physics in Garching, Germany, who last year reported that G2 was on course for Sgr A* (S. Gillessen et al. Nature 481, 51–54; 2012).

The observing frenzy is likely to jeopardize regularly scheduled observations, and some astronomers worry that the pay-off may be disappointing. Andrea Ghez, an astronomer studying G2 at the University of California, Los Angeles, says that her infrared observations at the Keck telescopes on Mauna Kea in Hawaii suggest that G2 may not be a gas cloud, but rather a star surrounded by gas. If she is right, Sgr A* may swallow some of the gas, but the star itself would have enough momentum to escape the black hole’s grasp. The result would be a Galactic fizzle rather than fireworks. “I’m just worried that this is overblown,” she says.

“I don’t think there was ever such a large camp of telescopes looking at the Galactic Centre.”

Yet the focus on the Galactic Centre has paid off unexpectedly. The reported X-ray flare prompted Fiona Harrison, an astronomer who leads NASA’s Nuclear Spectroscopic Tele­scope Array (NuSTAR) satellite, to train the X-ray space telescope on Sgr A*. Like Frail, Harrison doubted that the flare had anything to do with G2, but she thought that NuSTAR’s ability to time events precisely might clarify the situation. Sure enough, on 26 April, NuSTAR detected an X-ray signal blinking every 3.76 seconds — the signal of a pulsar spinning at that rate. Then, on 29 April, the Chandra X-ray Observatory localized the magnetar to at least 0.12 parsecs (0.38 light years) from the black hole — close, but much farther away than G2.

On 4 May, observations by NuSTAR and Swift, the NASA space telescope that spotted the original flare, identified the object conclusively as a magnetar by showing a gradual slowing in its spin rate. This slowing is consistent with the presence of the high magnetic field that enables the star to radiate energy faster than a normal pulsar.

Fourteen magnetars, including this one, have been found in the general region of the Galactic Centre. This high number supports the idea that magnetars tend to form from the death throes of the bright, heavy stars that are common there, says Chryssa Kouveliotou, a magnetar expert at NASA’s Marshall Space Flight Center in Huntsville, Alabama.

The finding also hands astronomers a tool for studying conditions near supermassive black holes. According to Einstein’s general theory of relativity, clocks in high gravitational fields run slow, as a result of the warping of space-time. So if the magnetar is following an elliptical orbit around the black hole, its clock-like spin rate should speed up and slow down as its distance from the black hole varies — an effect that, with luck, could be disentangled from the gradual slow-down caused by the magnetar’s magnetic field.

Frail suggests that the magnetar’s discovery shows that all the excitement over G2 is justified. Astronomers watching G2 say that the cloud itself could deliver plenty more excitement when it finally reaches the Galactic Centre. They are undaunted by the fact that one of the first apparent signs of its arrival turned out to be something completely different. “I wish all of our failed experiments were that good,” says Frail.