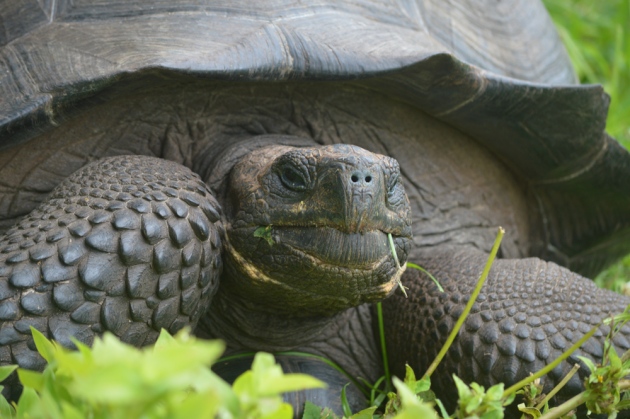 The tortoise Chelonoidis donfaustoi is found on Santa Cruz island in Ecuador.

A new species of giant tortoise has been discovered hiding in plain sight on Ecuador's Galapagos Islands. A population of about 250 animals living in an arid inland area of Santa Cruz island turns out to be so genetically distinct from the rest of the island’s tortoises that researchers have determined that it represents a separate species: Chelonoidis donfaustoi1.

“This guy dedicated his life to them,” says Adalgisa Caccone, an evolutionary biologist at Yale University in New Haven, Connecticut, and the lead author of the paper1 describing the species. “All the other [tortoise] species are named by scientists for scientists or explorers, but no species has been named after a person from Ecuador.”

Caccone and her colleagues had suspected for at least ten years that the inland tortoises, which inhabit an area about 20 kilometres from the main population, might be a separate species. The theory was first suggested by wildlife biologist Tom Fritts, who is now retired from the US Geological Survey. 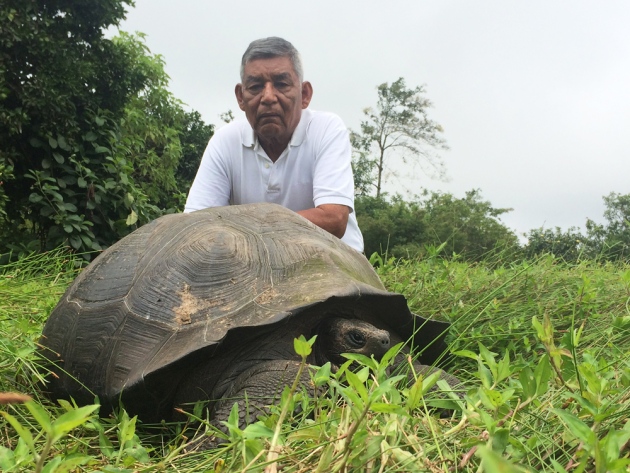 Don Fausto with a member of his namesake Galapagos tortoise species.

Fritts says that it was the clear geographical separation between the two populations that intrigued him, rather than any differences in appearance, or morphology. “Adult tortoises wear their history on their backs,” he says “There is a great deal of variation produced by environmental effect, so it is very difficult to differentiate them based on morphology.”

So he suggested that Caccone's team investigate the genetics of the two populations. Their paper1, published in PLoS ONE on 21 October, is the culmination of a decade of work. It presents 25 mitochondrial DNA mutations that reliably separate the two groups.

The researchers also analyzed 12 highly variable regions of nuclear DNA called microsatellite loci in 51 tortoises from both groups. The team found that when these loci were plotted by their distinctness from one another, two clear clusters emerged that corresponded to the two tortoise populations. “They are very distinct,” Caccone says.

The team has built a family tree of the islands' tortoises using thousands of samples collected in the past 20 years, allowing them to investigate the history of the two Santa Cruz species. The closest relatives of C. donfaustoi live on another island altogether, San Cristóbal. “Santa Cruz was colonized two times independently,” Caccone says.

Michel Milinkovitch, a conservation geneticist at the University of Geneva in Switzerland who has worked on Galapagos tortoises, says that the analysis shows that the groups are just as distinct as other tortoises in the archipelago that are considered separate species. (With the new discovery, the Galapagos is home to 12 known giant tortoise species.)

But whether the tortoise is a new species or perhaps just a subspecies matters less to him than its status as a genetically distinct breeding population. “The species concept is a fuzzy one,” he says. “Call them whatever you want, I don’t care. What is important is that people realize there is hidden diversity.”