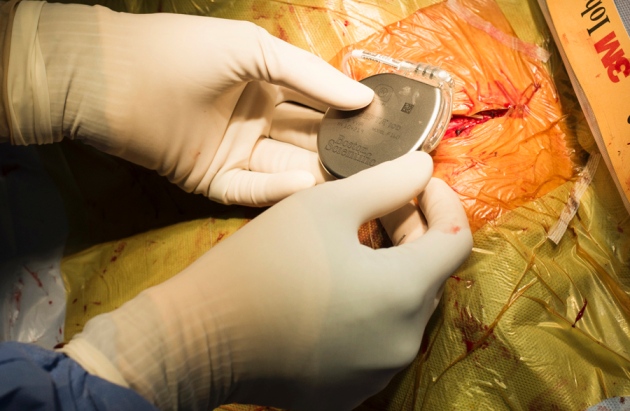 Electronic pacemakers require invasive surgery to install and carry the risk of infection.

Gene therapy could soon join the electronic pacemaker as a treatment for a weak heart. By inserting a specific gene into heart-muscle cells, researchers can restore a normal heart rate in pigs — at least temporarily.

Electronic pacemakers restore regular function to slowing and arrhythmic hearts by using electricity to stimulate their beating — a function usually peformed by the sinoatrial node, a cluster of a few thousand cardiac cells that signal the heart to pump at a regular rate. Although implanted pacemakers are widely used, they require an invasive surgery to be installed, carry the risk of infection, and can set off alarms during airport security checks.

To overcome these limitations, a team led by Eduardo Marbán, a cardiologist at Cedars-Sinai Medical Center in Los Angeles, California, sought to coax heart cells outside the sinoatrial node to keep the beat using a less invasive approach. The findings are reported today in Science Translational Medicine1.

In 12 pigs, the team mimicked a fatal human heart condition in which electrical activity cannot spread through the heart from the sinoatrial node, forcing other, weaker parts of the heart to take over. The researchers used high-frequency radiowaves to destroy the pigs' natural pacemaking cells in the sinoatrial node. As a result, the animals' average heart rate slowed to about 50 beats per minute, compared to the normal rate of 100 or more beats per minute.

Then the scientists injected the pigs' hearts with a virus that had been modified to carry a pig gene, Tbx18, involved in heart development. Within a day, heart cells infected with the virus began expressing a variety of pacemaking genes and pumping the heart at a normal rate. The animals maintained this steady beating for the two-week study period, whether resting, moving or sleeping.

Marbán says that his method is simpler than other biological approaches to steady irregularly beating hearts, such as inducing cardiac muscle cells to a pluripotent state, then coaxing them to differentiate into pacemaker cells. But he cautions that the effect of the gene therapy may be temporary. Over time, the body’s immune system is likely to recognize the virus used to deliver Tbx18 to the heart and attack infected cells. Marbán's team is now monitoring pigs that have received the gene-therapy treatment for several months to see how long the pacemaker effect persists.

But even if the treatment's effects are limited, it could still prove useful, says Marbán. For example, if a person's electronic pacemaker becomes infected and must be removed, a biological pacemaker could keep the heart pumping steadily until the infection clears and a new device can be implanted. The gene-therapy approach could also help fetuses with heart defects, as well as children who quickly outgrow implanted pacemakers or people for whom surgery is too risky.

“I think it’s a truly creative idea,” says Ira Cohen, a cardiac electrophysiologist at Stony Brook University Medical Center in New York. He would like to see the therapy tested in dogs, whose average heart rate is more similar to that of humans' 60-100 beats per minute..

Marbán says that the group is now talking to the US Food and Drug Administration about developing a human trial, which he says could be just two to three years away.