Fish thought to be ancestral to all vertebrates had already evolved an organ for internal fertilization, even though some of their descendants reverted to doing it externally.

The history of sex may have to be rewritten thanks to a group of unsightly, long-extinct fish called placoderms. A careful study1 of fossils of these armour-plated creatures, which gave rise to all current vertebrates with jaws, suggests that their descendants — our ancient ancestors —  switched their sexual practices from internal to external fertilization, an event previously thought to be evolutionarily improbable.

“This was totally unexpected,” says John Long, a palaeontologist at Flinders University in Adelaide, Australia, and lead author of the study, published in Nature1. “Biologists thought that there could not be a reversion back from internal fertilization to external fertilization, but we have shown it must have happened this way.”

Go back far enough in your family tree — before placoderms — and your ancestors were rather ugly jawless fish who reproduced through external fertilization, in which sperm and eggs are expelled into the water to unite. Some of these distant relatives later gave rise to the jawless fish called lampreys that lurk in seas today and still use this method of reproduction.

Long's team studied placoderms, one of the earliest groups of jawed animals, and found structures in fossils that they interpret as bony ‘claspers’ — male organs that penetrate the female and deliver sperm.

The researchers had previously shown in Nature2 that one placoderm species was the earliest vertebrate known to have engaged in penetrative sex. But the latest paper shows that an even earlier group of placoderms, the antiarchs — specifically, a group of antiarchs called Microbrachius — also used this method of fertilization. The finding is significant because antiarchs are considered the most 'basal' jawed vertebrates (meaning those closest to the roots of the animal family tree), and so it suggests that all placoderms reproduced through internal fertilization using claspers. 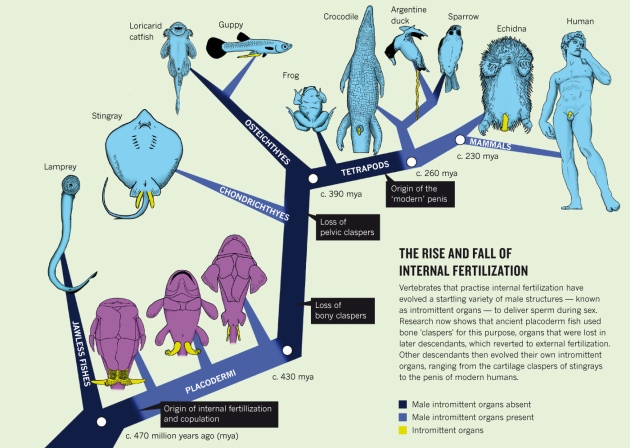 But the implications of this finding are even more penetrating. Long says that the oldest bony fishes, which follow placoderms in the evolutionary tree, show no evidence for internal fertilization. Thus, at some point, early fishes must have lost the internal fertilization method seen in placoderms, before some of their descendants 're-invented' organs with a similar function — ranging from similar claspers in sharks and rays today to the penises of modern humans, suggest the authors. (The claspers of modern sharks, however, are made of cartilage and develop from the pelvic fins, which makes them fundamentally different from the bone claspers of placoderms.)

“Our new paper suggests that after the first jawed vertebrates evolved internal fertilization, then it was lost at the point close to where the last common ancestor of modern jawed fishes evolved,” Long told Nature.

The paper is also likely to strongly influence an ongoing debate about placoderms' place in evolutionary history. Until a few years ago, placoderms were considered to be a 'monophyletic' group — a coherent group that includes all its descendants, a kind of evolutionary 'dead end'. By this interpretation, other vertebrates would have shared a common ancestor with this group rather than descending from them.

But more recently, researchers including Martin Brazeau, a vertebrate palaeontologist at Imperial College London’s Silwood Park campus in Berkshire, have suggested that placoderms may not be a single coherent group, on the basis of evidence from their cranial structures3, 4. This would mean that rather than humans sharing a common ancestor with placoderms, placoderms are themselves humans' ancestors.

The latest paper complicates this debate, and offers two uncomfortable options. According to Brazeau, the work convincingly makes the case that all placoderms were internal fertilizers, leading to a conclusion once seen as highly improbable: that some of the living fishes that practise external fertilization had ancestors that fertilized internally. But the fact that all placoderms had bony claspers could be taken as evidence that they were a unified, monophyletic group, and this would contradict the cranial evidence that puts placoderms near the top of the jawed-vertebrate evolutionary tree.

Brazeau says that he is now “increasingly agnostic” about these two options. “This work will certainly make people sit down and consider this more seriously than in the past,” he says. “It is pretty exciting because of that. It raises more questions than it answers.”