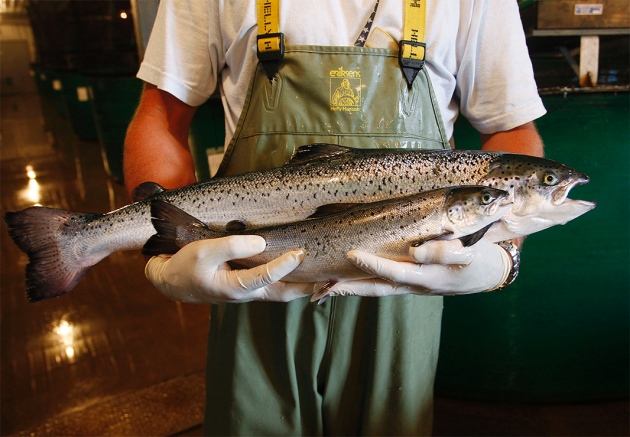 The genetically engineered AquaBounty salmon shown here is about twice the size of its wild kin, although both are roughly the same age.

Genetically engineered salmon has reached the dinner table. AquaBounty Technologies, the company in Maynard, Massachusetts, that developed the fish, announced on 4 August that it has sold some 4.5 tonnes of its hotly debated product to customers in Canada.

The sale marks the first time that a genetically engineered animal has been sold for food on the open market. It took AquaBounty more than 25 years to get to this point.

The fish, a variety of Atlantic salmon (Salmo salar), is engineered to grow faster than its non-genetically modified counterpart, reaching market size in roughly half the time — about 18 months. AquaBounty sold its first commercial batch at market price: US$5.30 per pound ($11.70 per kilogram), says Ron Stotish, the company’s chief executive. He would not disclose who bought it.

AquaBounty raised the fish in tanks in a small facility in Panama. It plans to ramp up production by expanding a site on Canada’s Prince Edward Island, where local authorities gave the green light for construction in June. In the same month, the company also acquired a fish farm in Albany, Indiana; it awaits the nod from US regulators to begin production there.

The sale of the fish follows a long, hard-fought battle to navigate regulatory systems and win consumer acceptance. “Somebody’s got to be first and I’m glad it was them and not me,” says James West, a geneticist at Vanderbilt University in Nashville, Tennessee, who co-founded AgGenetics, a start-up company in Nashville that is engineering cattle for the dairy and beef industries. “If they had failed, it might have killed the engineered livestock industry for a generation,” he says.

AquaBounty’s gruelling path from scientific discovery to market terrified others working in animal biotechnology, and almost put the company out of business on several occasions. Scientists first demonstrated the fast-growing fish in 1989. They gave it a growth-hormone gene from Chinook salmon (Oncorhynchus tshawytscha), along with genetic regulatory elements from a third species, the ocean pout (Zoarces americanus). The genetic modifications enable the salmon to produce a continuous low level of growth hormone.

AquaBounty formed around the technology in the early 1990s and approached regulators in the United States soon after. It then spent almost 25 years in regulatory limbo. The US Food and Drug Administration (FDA) approved the salmon for consumption in November 2015, and Canadian authorities came to the same decision six months later. Neither country requires the salmon to be labelled as genetically engineered.

But unlike in Canada, political battles in the United States have stalled the salmon’s entry into the marketplace. The law setting out the US government’s budget for fiscal year 2017 includes a provision that instructs the FDA to forbid the sale of transgenic salmon until it has developed a programme to inform consumers that they are buying a genetically engineered product. Senator Lisa Murkowski (Republican, Alaska), who inserted the provision, has called AquaBounty’s salmon “fake fish”.

Activists in both the United States and Canada have demanded that regulators reconsider their decisions, and some have filed lawsuits. The Center for Food Safety, an environmental-advocacy group in Washington DC, sued the FDA last year in an attempt to overturn its salmon decision. The group says the agency lacks the legal authority to oversee genetically engineered animals, and that it made its decision without fully considering the environmental risks.

The announcement that AquaBounty’s fish are landing on Canadian tables is sure to dredge up opposition, says Stotish. He argues that the genetically engineered fish are good for the economy — attractive because they can be grown near metropolitan areas rather than being flown in from overseas, bringing salmon-farming jobs back to the United States and Canada. And because the AquaBounty salmon are grown in tanks, he adds, they don’t encounter many of the pathogens and parasites that often afflict salmon raised in sea cages.

“I think the larger market is viewing it as a more predictable, sustainable source of salmon," Stotish says. “As a first sale this was very positive and encouraging for us.”