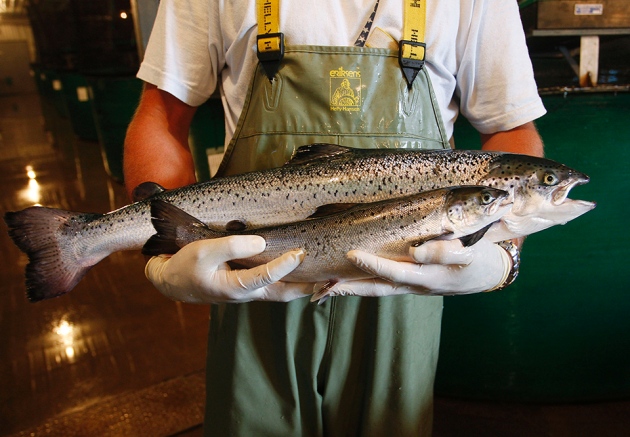 A breed of fast-growing Atlantic salmon rocketed to celebrity status on 19 November when it became the first genetically engineered animal to be approved for human consumption in the United States.

The landmark decision by the US Food and Drug Administration (FDA) releases the ‘AquAdvantage’ salmon from two decades of regulatory limbo — but it could also revitalize an industry that has waited a long time for any sign that its products might make it to market.

“It opens up the possibility of harnessing this technology,” says Alison Van Eenennaam, an animal geneticist at the University of California, Davis. “The regulatory roadblock had really been disincentivizing the world from using it.”

The FDA decision comes at a time when the US government is re-evaluating how it regulates genetically engineered crops and animals. On 2 July, the White House Office of Science and Technology Policy said that it will update those regulations — for the first time since 1992 — over the next year. And at a meeting on 18 November, the US Department of Agriculture (USDA) discussed preliminary plans to revise its guidelines for genetically engineered crops.

A key driving force for these discussions is the recognition that current regulations may not cover crops and animals engineered using cutting-edge techniques, such as the CRISPR–Cas9 system, that allow researchers to make targeted changes to the genome. The USDA has already determined that its regulations do not apply to several genome-edited crops. Van Eenennaam says that it is still unclear how the FDA will regulate animals that have been engineered using that technology.

“There is a lot going on these days,” says Greg Jaffe, director of biotechnology at the Center for Science in the Public Interest in Washington DC. “But obviously, up until the decision about the salmon, people were mostly focusing on the crop side.”

AquaBounty Technologies, based in Maynard, Massachusetts, filed its first application to the FDA for approval of the salmon in 1995. The agency completed its food-safety assessment in 2010, and released its environmental-impact statement at the end of 2012. The long delay between the completion of those steps and a final decision led to rumours of political interference.

But Laura Epstein, a senior policy analyst for the FDA’s Center for Veterinary Medicine, says that the approval took so long because it was the first of its kind. “With most products that are the first of its kind, we are very careful,” she says. The agency also had to wade through many public comments before it could issue a decision, she adds.

It is unclear how the salmon will fare on the market. AquAdvantage fish produce extra growth hormone, allowing them to grow to market size in 18 months, rather than the usual 3 years. In the time since AquaBounty first filed for approval, fisheries have bred conventional salmon that grow just as fast, says Scott Fahrenkrug, chief executive of Recombinetics, an animal-biotechnology firm in St Paul, Minnesota.

“It opens up the possibility of harnessing this technology.”

Then there is the matter of consumer acceptance: several grocery chains have said that they will not carry the salmon, which, even at full production, would amount to only a tiny fraction of total US salmon imports. “It’s a drop in the bucket,” says Jaffe. “Consumers would have to hunt to find salmon that are genetically engineered, as opposed to avoiding them.”

Still, the FDA’s approval met with swift opposition from some environmental and food-safety groups. Although AquaBounty uses physical and biological safeguards to reduce the chance that its salmon will escape into the wild, opponents fear that an accidental release could alter natural ecosystems. They are also unhappy that the FDA will allow the fish to be sold without any label to indicate that it is genetically engineered.

“Huge numbers of people have said, ‘Yes, we want it labelled’,” says Jaydee Hanson, a senior policy analyst at the Center for Food Safety, an environmental-advocacy group in Washington DC. “If this is such a good product, the company itself should be saying it will label it.”

The FDA declined to comment on whether other applications for genetically engineered animals are in the regulatory pipeline. But Fahrenkrug says that his company is developing several such animals, including cattle that do not have to be dehorned and pigs that do not need to be castrated.

The FDA has yet to announce how it will view such animals, but Fahrenkrug takes approval of the salmon as a sign that the agency is willing to allow them onto the market. “I’m feeling optimistic now,” he says.